Even the magician idols of Junjou no Afilia could not escape the COVID-19 pandemic hitting the entire world this year, as the Stand Up! Records groups management teams took the safety measures of social distancing very seriously. Junjou no Afilia spent the past five months at home keeping their activities straightly online after the cancellation of all their live events.

July 25th was the first time the group was able to stand up on stage in front of their fans after Japan started to allow gatherings and events again. Despite the limited number of tickets and safety guidelines, their fans did not fail to show up at Ebisu Garden Hall for two extremely refreshing concerts!
Both lives were also streamed online through ZAIKO for those who could not make it in person. 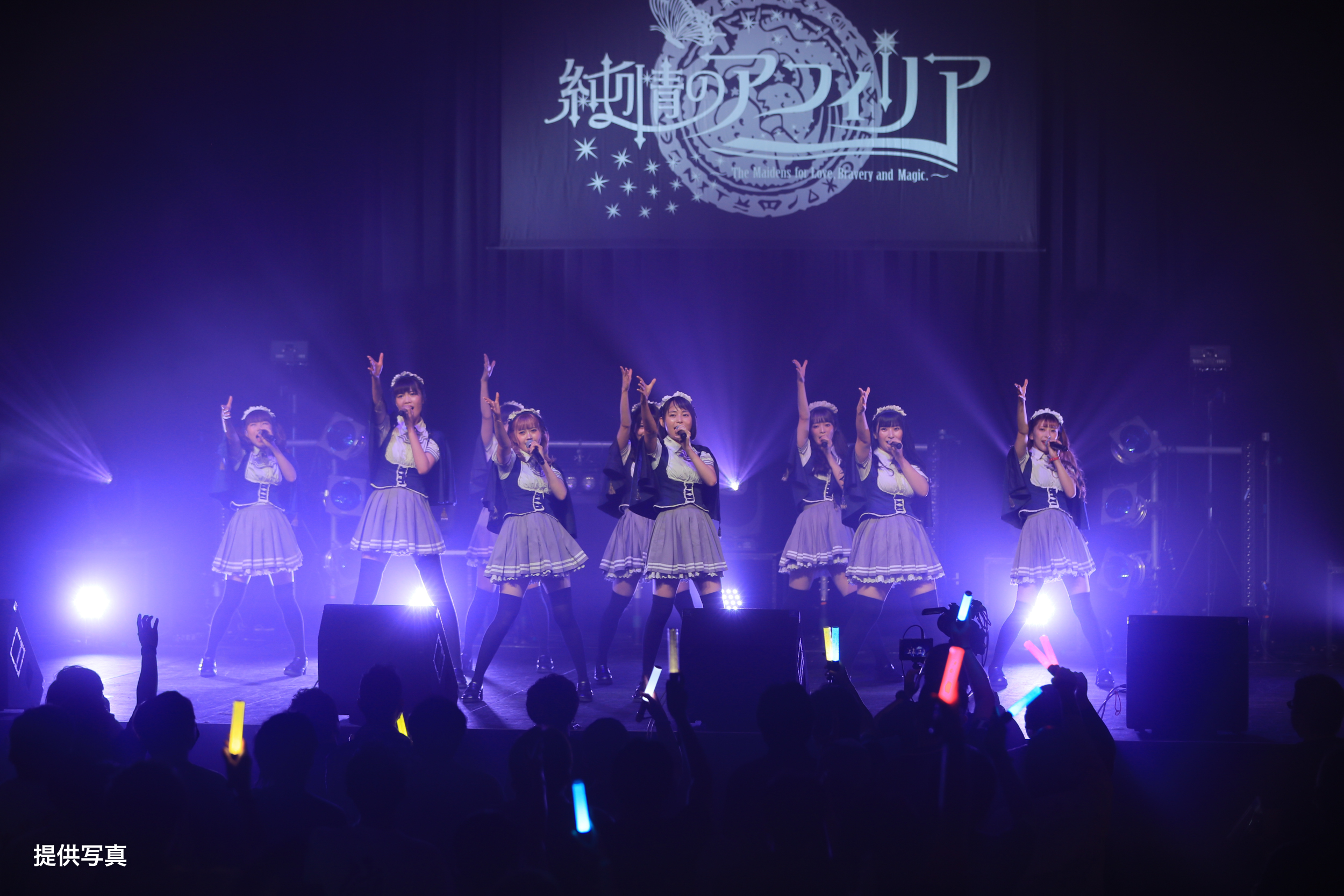 The first segment of both concerts started with an uplifting introduction video, for the maidens of Junjou no Afilia to start singing and dancing with an acute energy after these five months away from their audience.
The evening show especially saw a first segment made of Junjou no Afilia’s most recent singles: the sharp dance moves and electro vibes of “I WANT TO GROW”, Junjou no Afilia’s signature dramatic masterpieces such as “Kono sekai ni mahou nantenai yo” and “Zankoku no Babel”, the legendary “Lost in the Sky”, and more. They also performed their most recent single title track, the very upbeat and happy “Like? Or Love?”, released very shortly before Japan embraced social distancing.

Fans were also surprised with the performance of a new song, “RE:QUEST”, written by Momoi Halko. The lyrics were displayed on the big screen as Junjou no Afilia danced to this new uplifting optimistic anthem. “Isn’t it great that you guys can read the lyrics while we perform?” leader Nagisa Kaori told the audience in the following MC, “it’s so that you can see that Junjou no Afilia members are not only cute, but we also have great songs!”. It was also the set up for a bigger surprise announced over the evening performance… 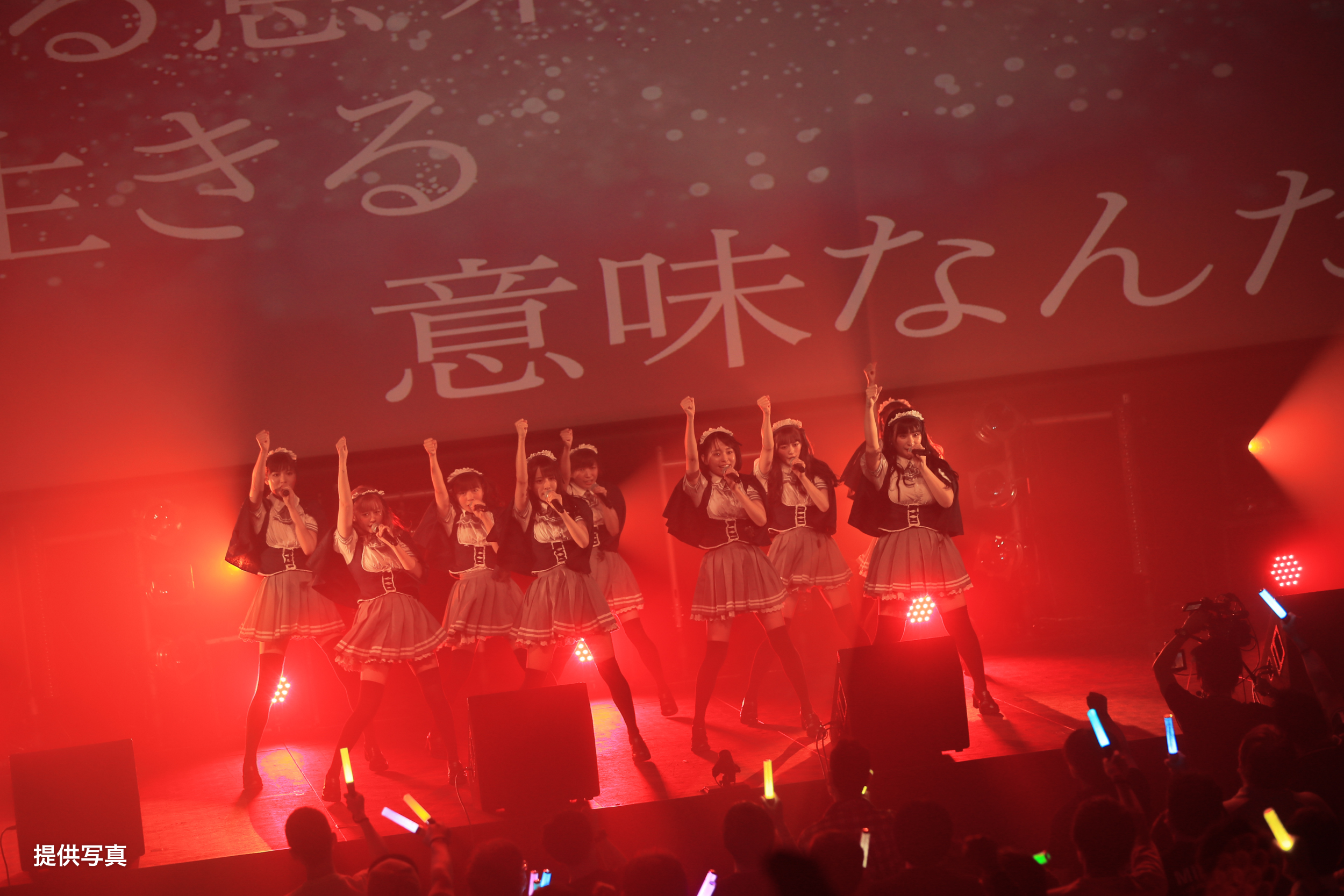 But before the big news hit the crowd, another smaller gift was offered to the fans, as the first notes of 10th anniversary tour theme song “Kiseki to Mahou no Chronicle” started ringing, and a brand new MV for the song, filmed remotely, was shown on the big screen! The MV was directed by Imamura Shigeru from Karomi Studio, the team behind productions like Iketeru Hearts’ “HEARTS OF JOURNEY” or even a number of popular Morning Musume music videos. 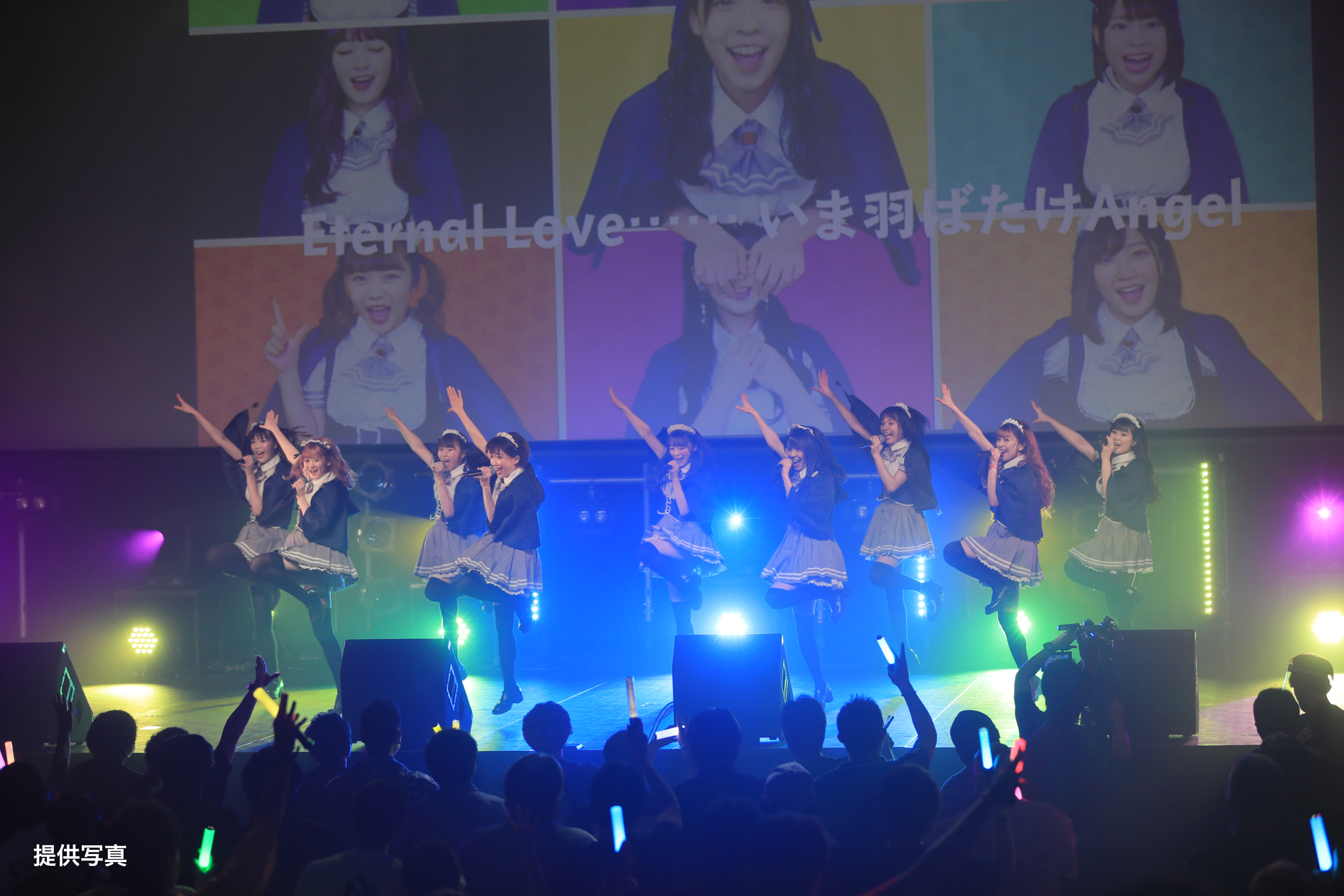 A final segment closed both performances as shouting being forbidden in the venue explained the lack of encores. The afternoon performance saw a combo of Junjou no Afilia’s catchiest and most upbeat tracks, such as “JUICY☆GIRL” with its shiny pompoms, the cheeky “Mahou no Chocolate Densetsu”, or one of their new staple party-worthy songs “Suki wa muteki”. The night performance closed on the dramatic “Sore dake ga, ikiru imi nanda”, at the end of which the calls from the crowd were therefore replaced by handclaps perfectly on beat to mimic the usual mix, in a strange but heartwarming “new normal idol” feeling.

The final announcement of the day did not wait long, and the members themselves were not even aware until it happened!
Junjou no Afilia will be going on a national tour by the end of 2020, taking them to Nagano, Osaka and more cities, before a final performance in Otemachi Hall in Tokyo on December 26th. “RE:QUEST” has been written as the theme song of this new journey, as Momoi Halko explains in her message to the members below:

Kana, Yumi, Kaori, Serrah, Chloe, Anna, Meimi, Beel, Amina.
After the end of our previous one-man live, I overheard many words from fans, such as calling you “the Strong 9” or saying, “Isn’t current Junjou super strong?”, and I could not forget it, deep down in my heart.
Each one of you was able to polish your own personality, as getting you together was able to take the group to reach a historical balance, I thought could only hope that you would be able to draw even more strength for your performances from there on… and then the virus happened. We announced that we would suspend all live performances.
I was almost done with new lyrics as the thought on how to still bring the fans the usual energy in such circomstances hit me, and I decided to rewrite it all, to create this song.

The title is, “RE:QUEST”.
“RE:” for “once again, something anew”, and “QUEST” for a new adventure, the title holds a fantasy-like double meaning.

Fans have been saying, “We want to meet you”, “We want to see you on stage”… and such “requests” have been painful to hear for the members. Lives and events were cancelled, but remote activities managed to bridge the link with the fans, who have been extremely supportive. Thanks to all the senpai (fans) who participated in online events, and I thought that Junjou no Afilia can still be idols after all.
I knew that holding live performances was not reasonable up until now. As members participated into online solo events, other members showed up to support them, and thanks to the fans always watching out for them, a small miracle happened. During this soft lockdown, nine people encouraged each other despite being away from one another, and it only made them stronger.
Now that everyone went through this unprecedented “patience”, the next stage of those 9 idols will give you a feeling of hope, and “open” everyone’s hearts despite the restrictions, growing as idols.
“To be free” = Becoming free by opening your heart,
“Ashita he no Passage” = the path to a shining place,
By those words, I want to convey love and hope to everyone, whether online or in real life, through this new song.
Please enjoy this magical time with the voices and dance of all 9 members, whose bonds are tighter than ever. 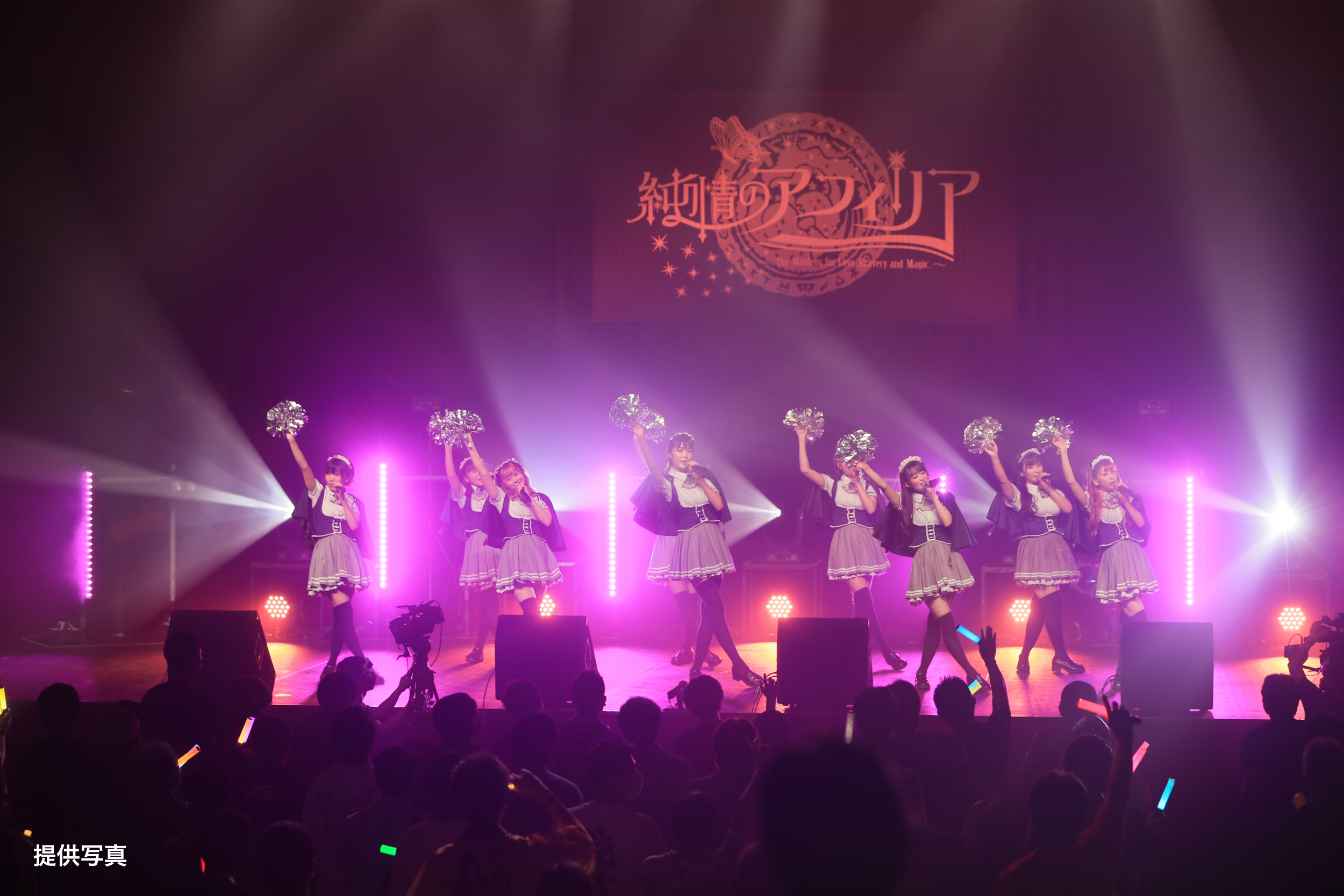 After months without getting to enjoy our idols’ singing and dancing, this double performance felt like a fresh wind of freedom. The fans rest assured, Junjou no Afilia hasn’t changed one bit, and these new announcement also seem to be hinting to a bright future despite the difficulties brought by such pandemic.
Switching to online events, live venue restrictions preventing idol wota from shouting their usual mix… Times are tough, but we stand ready to witness how idols and their crowd will adapt the culture to a “new normal” lifestyle in the next few months!

Both lives are available on ZAIKO until July 31st:
Buy your tickets here

We want to thank Junjou no Afilia’s management team for providing the official photos for this event.
Article and Translation by Melody