Despite their complicated relationship with Tokyo Idol Festival every year, 2019 once again welcomed Watanabe Junnosuke‘s productions bringing in an excited crowd. The festival also gave them another one-hour long slot on the Smile Garden to celebrate the success of the WACK family, experimental playground for these crazy idols and their producer. 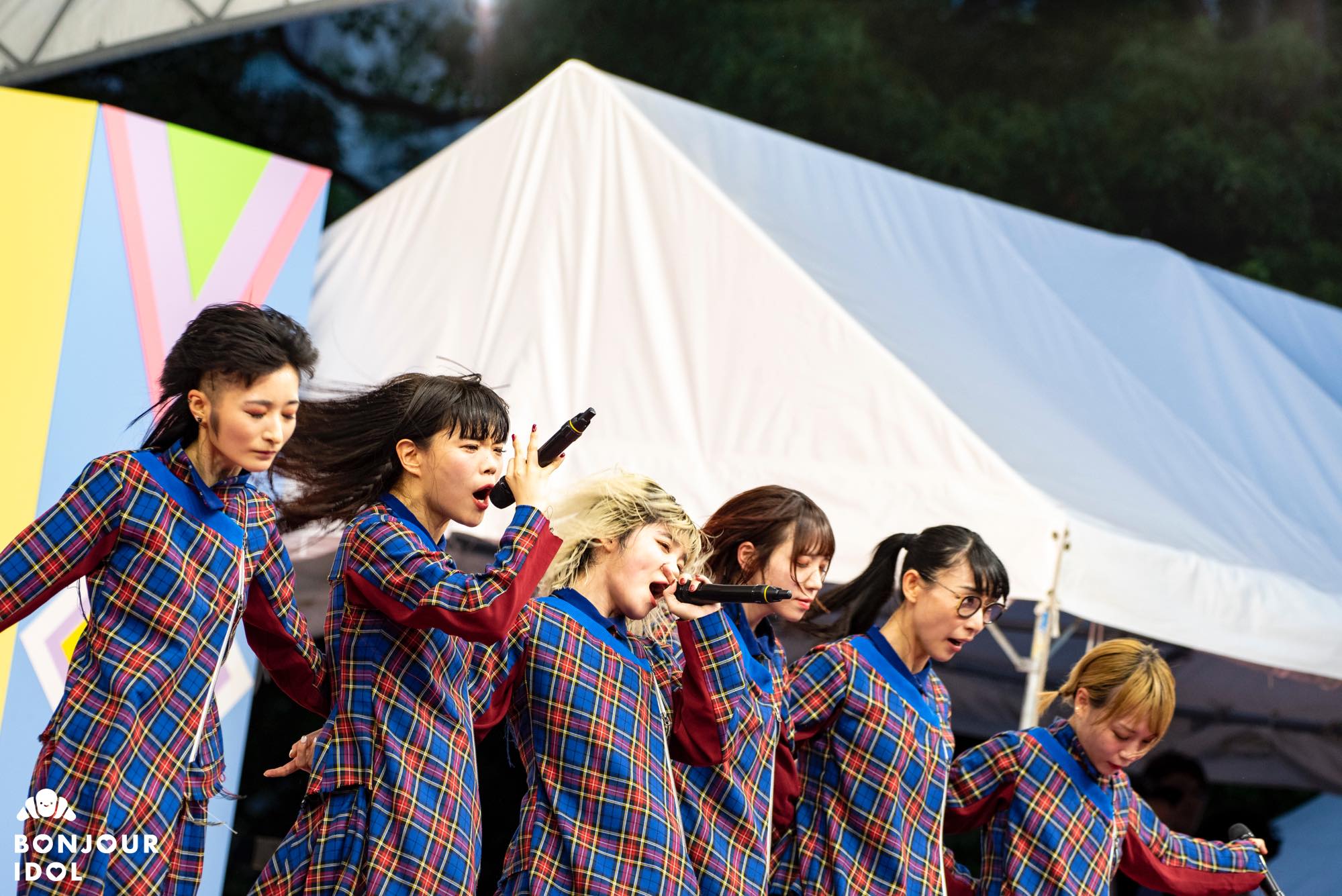 Headliners and one of the biggest punk-rock idol hits of the past couple of years, BiSH managed this year again to lit up the crowd at the Smile Garden stage during the late afternoon of the final day at Tokyo Idol Festival.

The alternative idol scene princesses used to have an habit to just show up to perform their most legendary song six times in a row, as it was for their previous appearances at Tokyo Idol Festival. 2019 shows a change of pace as BiSH opted for a more classic setlist of emotional songs, such as, in no particular order, “Orchestra” or the more recent “DiSTANCE”. Fans were happily rowing sitting down on the ground on “Spark”, before jumping around on “Da Dance!!” then clapping their hands on “BiSH ~Hoshi ga matataku yoru ni~”.

Their performance ended on the very fitting “Ikitette yokatta to iu no nara” (“If you are happy to be alive…”), resonating like heartfelt thanks to this loyal audience that never fails to show up to support their favorite idols. 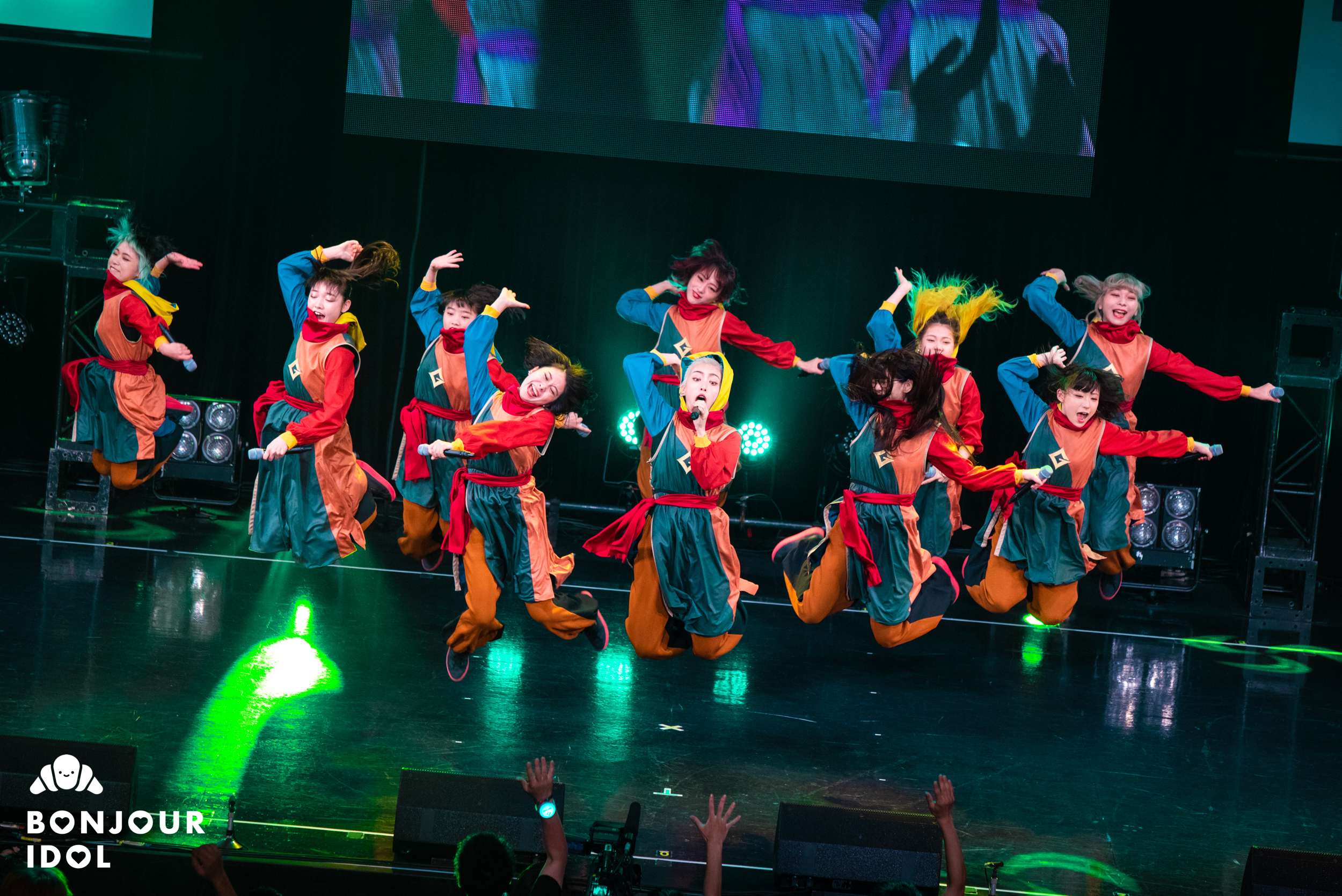 WACK’s wild child took over Zepp DiverCity on that same day, as the ten hyper-energetic members of GANG PARADE shook up the main stage of Tokyo Idol Festival.

Led by Kamiya Saki, it was this time the only WACK group to prank their audience once again by performing only one song six times in a row! The audience at Zepp DiverCity turned into a sea of people for half an hour of “Plastic 2 Mercy” with the same energy from beginning to end, without ever flinching.
The provocative mood of the WACK productions comes and goes, and found its climax this year with GANG PARADE, leaving the stage after these six performances of their anthem without a single word to their fans, laughing out loud in the audience.

GANG PARADE will go on a national tour from September 7th, starting with a double performance at Yokohama Bay Hall, until their grand finale at Nakano Sunplaza on November 4th. 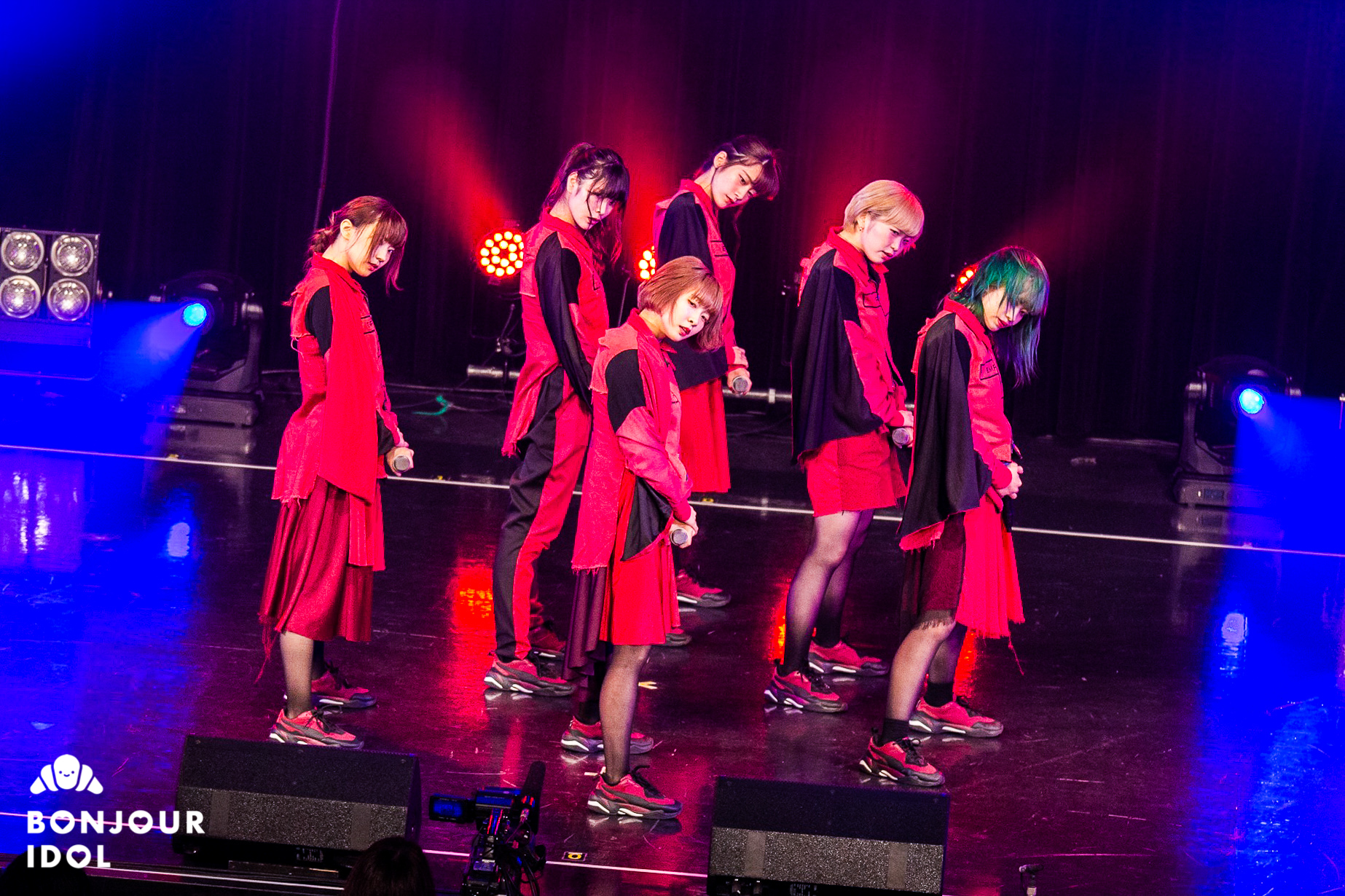 Co-produced by avex, the rising stars of the alternative idol scene EMPiRE did not fail to lit up the main stage at Tokyo Idol Festival this year again.

Just like their seniors from BiSH, no unique song on repeat this year! EMPiRE performed a selection of their songs, offering fan-favorites to their audience as most of these tracks are always a hit wherever they appear in Tokyo and around the country.
Opening with second single “SUCCESS STORY”, EMPiRE rose the temperature with the aggressive “SO i YA” or the playful rock sounds of “Buttocks Beat! Beat!” among others, before letting their fans embrace the emotional “MAD LOVE” as a conclusion.

EMPiRE will be releasing their third single “RiGHT NOW” on October 16th. The group appears on a regular basis in events around Tokyo, so don’t hesitate to go and meet them when you’re around! 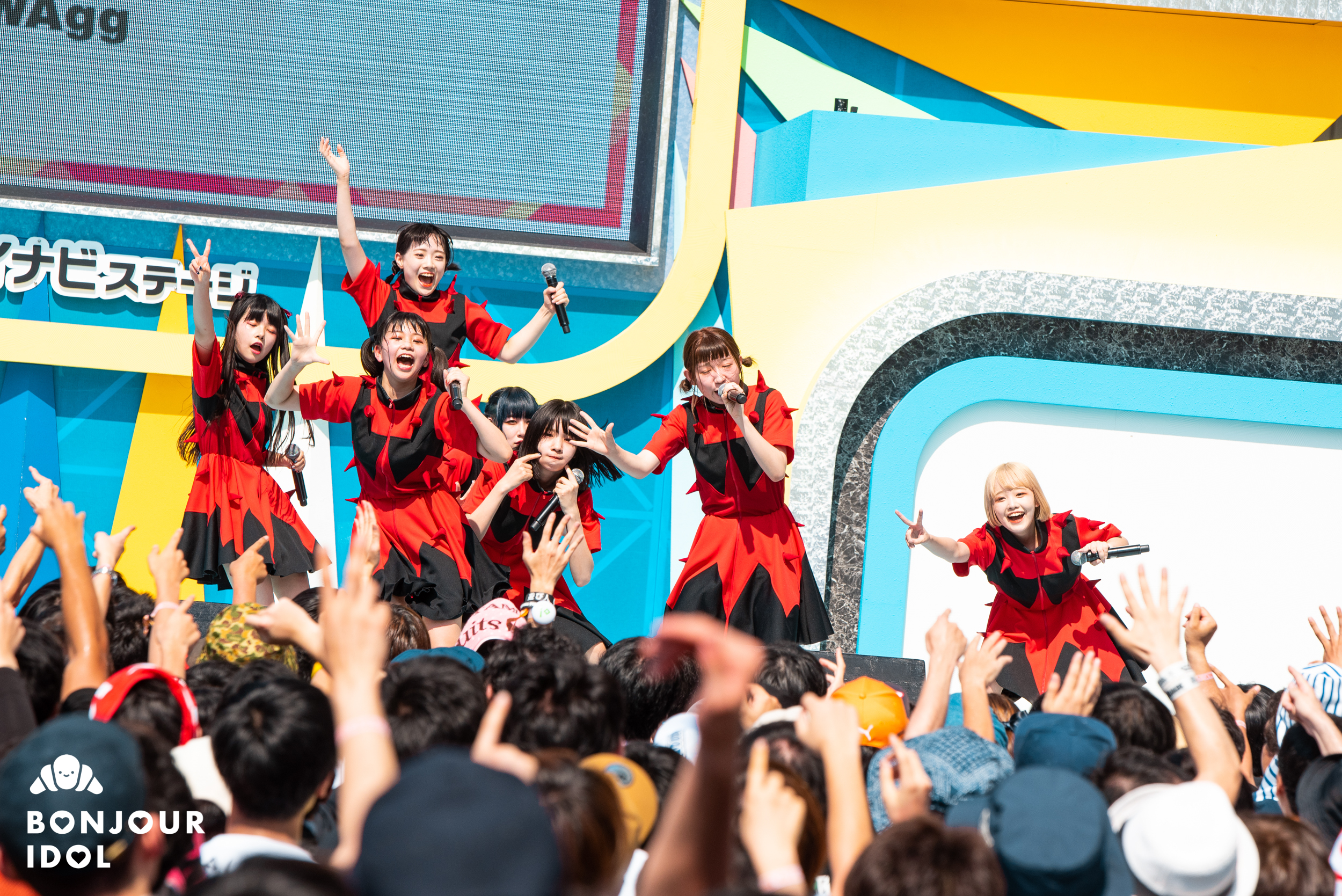 The trainee group from WACK was also participating into their very first Tokyo Idol Festival this year, following the footsteps of their seniors to grab the hearts of their own audience.

WAgg do not have any original song and cover tracks from the iconic WACK groups, whether from BiSH, GANG PARADE, EMPiRE, or even older classics from the first generations of BiS. Their performance on the Dream Stage got the alternative idol enthusiasts excited as the young members of WAgg opened with “nerve” (BiS), followed up by “BiSH ~Hoshi ga matataku yoru ni~” (BiSH) then the raw emotion of “GANG” (GANG PARADE). It was on a second “nerve”, legendary song from BiS and a renowned classic for idol fans since its first release in 2011, that the future of the alternative idol scene ended their performance. 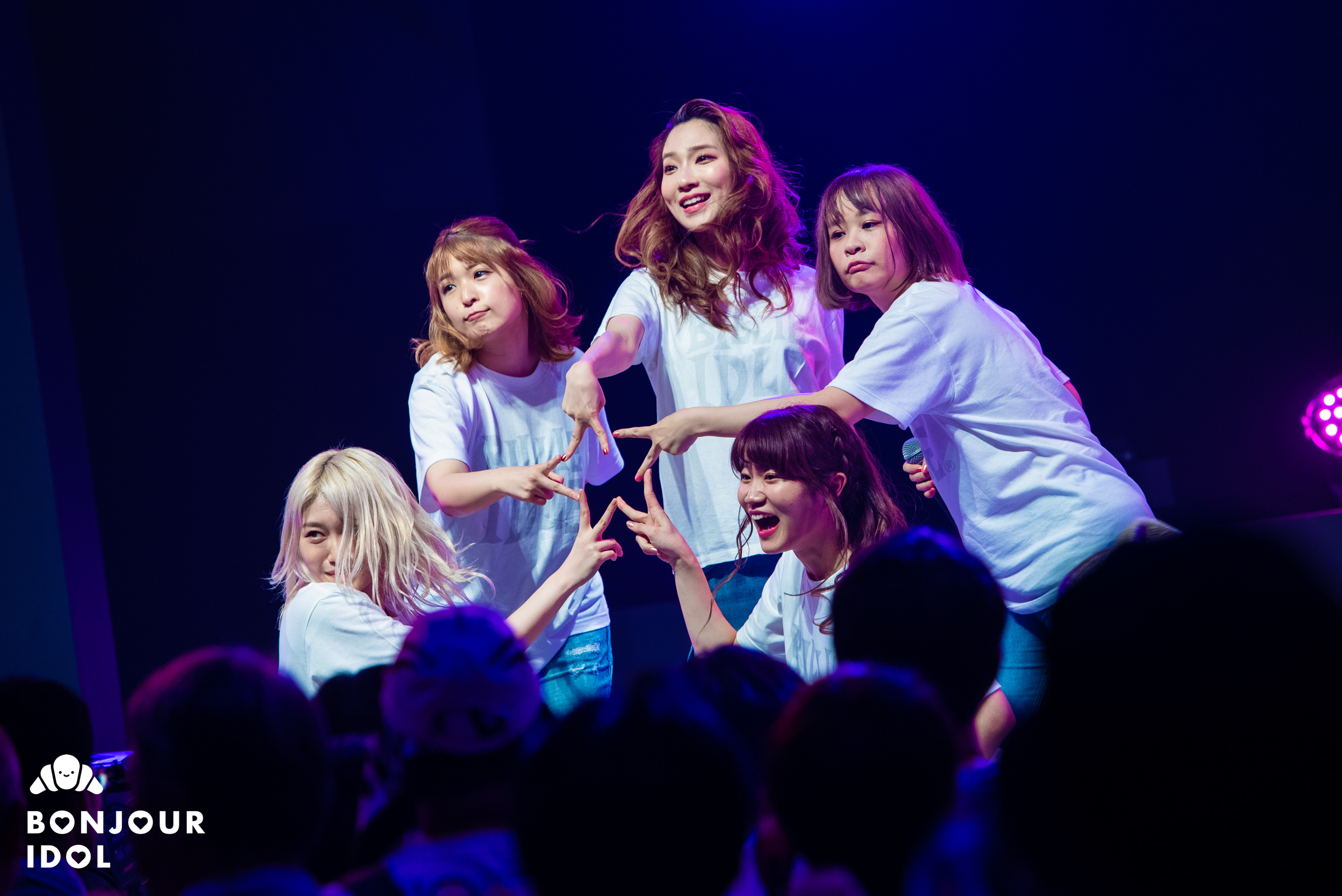 BILLIE IDLE® is not officially part of WACK since 2018, but we could not possibly finalize this article without mentioning the group led by veterans of the earliest generations of BiS (and more!).

Their independent status from the WACK groups justified the number of performances at Tokyo Idol Festival, appearing on two stages over two days, between the elevated Sky Stage and the warehouse-style Doll Factory. If the former was the perfect playground for their most emotional tracks, the latter lit up to the sounds of their catchiest songs such as “Everydays”, “be-bop-tutu” or “Cinderella Anthem”. Their latest single to date, “Bokura Mada Chippoke na Koro no Hanashi”, closed this performance on a vivifying and optimistic note.

BILLIE IDLE® is currently on a national tour, ending on September 29th in an already sold-out performance at ell.FITS ALL de Nagoya. Their next single was announced for October 23rd. 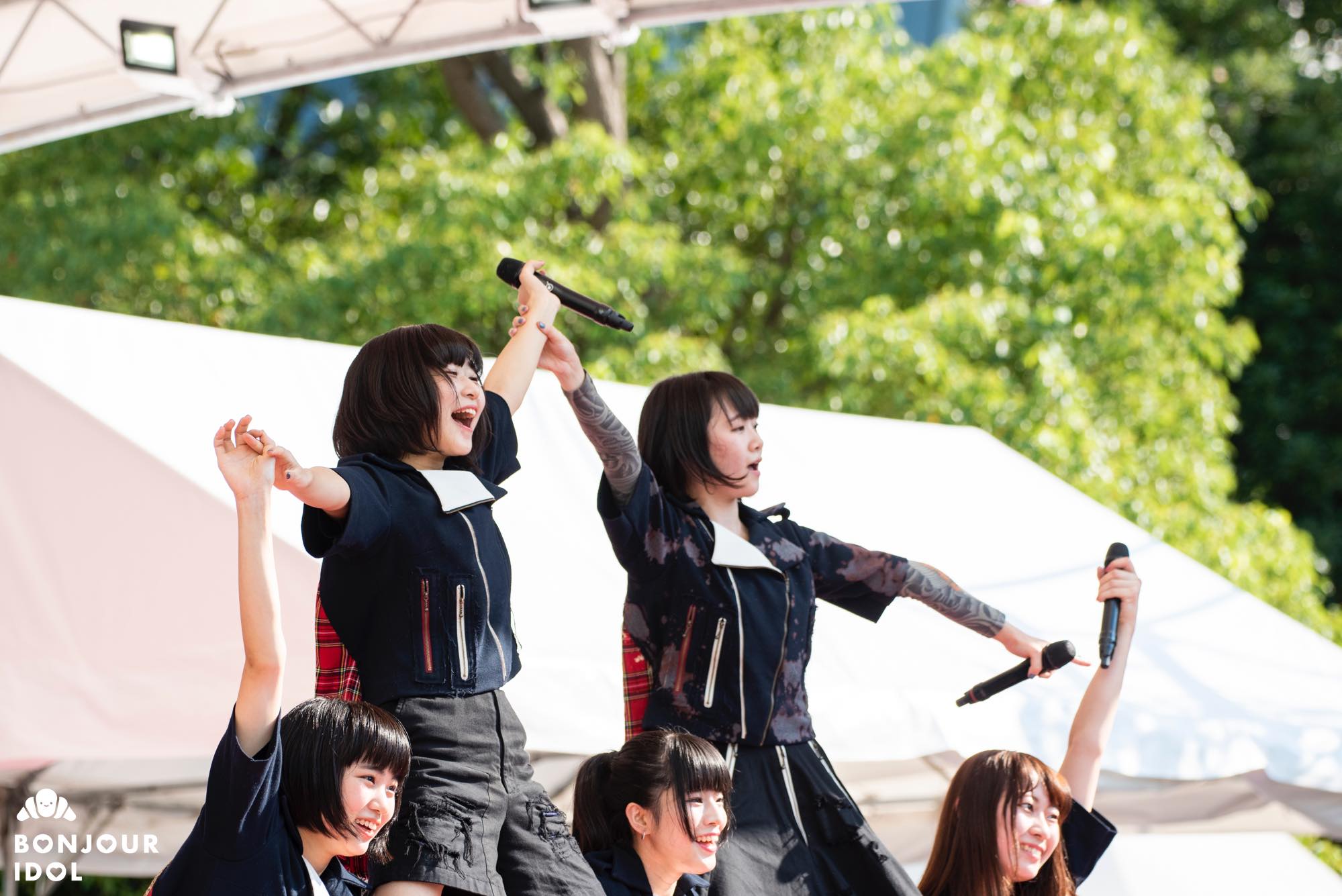 The afternoon of this final day of Tokyo Idol Festival gathered hundreds of fans in front of the Smile Garden stage, for an hour of special performances, courtesy of the idols of the WACK family.

Opening the stage with an acoustic jam session, Aina The End (BiSH) charmed this year again the audience of Tokyo Idol Festival with her powerful husky voice, backed up by Matsukuma Kenta‘s guitar.

It is on this emotional note that the young singer left the stage for a surprise, and not quite the least! Showed up on stage the five newest recruits of the third generation of BiS, for their very first official public performance. While they are now down to four members after the withdrawal of Manako Chii Manako, the fresh energy of Itou Musensiteebu, Neo Trees, Chantmonkee and Toggy quickly got the audience excited, performing their new original songs. “STUPiD” and “BiS – Douyara Zombie no Otemashi -“ set the tone, before a squats session on “thousand crickets”, spiritual heir of the legendary “Paprika”.

The WACK presents DREAMLIGHTS in TIF stage kept it up with the annual but much anticipated performances of their special sub-units, with “WACK is FXXK” from SAiNT SEX (Aina The End, Ayuni D, Kamiya Saki, Yumeno Yua, Yamamachi Miki, Pan Luna Leafy and NOW EMPiRE), “WACK is SHiT” from HOLY SHiTS (Cent Chihiro Chittiii, Can GP Maika, MAHO EMPiRE, Uruu Ru and A Anzupia), then the delirious craziness of Yui Ga Dockson with her solo song “Like a virgin”.

This special show ended with the entire line-up from all WACK groups (BiSH, GANG PARADE, EMPiRE, WAgg, Curry Rouxz and BiS) gathering on stage, singing the freshly revealed and brand new all-stars anthem of their production, “WACK is BEAUTiFUL (this is love song)”.

Photos by Kai, Nathan and Jonathan
Article by Melody