After our article on the first day about the @JAM EXPO 2018’s main stage, here is the summary of the highlights about the second day of the festival!

If there is a group that can light up the atmosphere at the very start of a festival, it is surely FES☆TIVE, thanks to their songs and crazy choreographies. The fans can bring everyone around to dance with them! This year, the 6 members group were able to perform on the main stage for the first time in 3 years of participation, which symbolically marks the meteoric rise of the group in recent months. The group’s flagship songs such as “Magical Parade”, “Shidare Yanagi” and “OIDEMASE !! ~ Gokuraku ~” invaded the Yokohama Arena and set the tone until the end of the day! The group also took the opportunity to unveil their new stage costumes.

Up Up Girls (KARI)

The five hot-up members of Up Up Girls (KARI) did not fail to fire up the main stage during their own stint. The group is a regular at summer festivals and their energy and dynamic songs are always there! This was their first five-members performance at @JAM EXPO event after the departure of Sengoku Minami and Sato Ayano in September 2017.

It’s not a joke! @JAM EXPO’s 2018 edition marked Fujikawa Chiai‘s last participation in the festival as a member of the famous group Maneki Kecak. After Japan Expo and the Tokyo Idol Festival, the five members hit again and this time, it was at the Yokohama Arena!
They started off with the classic “Joudan Janai ne”. The highlight of this performance came with the last two songs, “Ai Omoi” (new title which was suddenly announced the day before) and “Kimi Wazurai”, in which each line sung by Chiai sounded like a goodbye. The group’s main singer had announced her departure a few days earlier.

After visiting France during Japan Expo 2018, =LOVE continue their journey through summer festivals! They were still promoting their third single “Teokure caution” at the time and as a consequence were wearing the single’s dark uniforms. The members have once again convinced their audience and were able to perform a large part of their discography as “Yokoso! Ikorabu Numa” opened the doors of their universe. Like a symbol, “=LOVE” ends this series of seven songs in a hyped up atmosphere!
The group produced by Sashihara Rino now hit the four singles mark and have already started their second year of activity.

Bonus: here are some extra pictures we were able to snap during the group’s performance on the Blueberry stage.

We have talked about the young members of Task have Fun in one of our “Discoveries” piece, and we are delighted to mention their name again in this article! The group continues to grow and their rise seems infinite. For @JAM EXPO 2018, Kumazawa Fuuka, Shiraoka Kyoka and Satonaka Natsuki had the honor to stand on the main stage for their very first participation in the festival, a real proof of the group’s popularity. Needless to say, the three members were much anticipated by the fans and the audience was not disappointed. Whether for “TASK”, “Kimi Nanda kara” or their anthem “3WD”, the furicopy (reproduction of the choreography by the fans) were on point!
The group will be in Hong Kong during the @JAM×TALE festival in Hong Kong 2019, and their third birthday tour begins on March 31st in order to end at MyNavi BLITZ on June 23, 2019.

SUPER☆GiRLS and their summer songs don’t need no introduction. The group was there as well! The public was able to enjoy “Bubblin Squash!”, released a week before the festival, and the members then plunged the audience into a series of nostalgic songs that greatly contributed to the group’s success! This medley reminded the fans of the pleasant atmosphere of summer despite the legendary Japanese heat.
Unfortunately, Watanabe Hikaru, Miyazaki Rina, Asakawa Nana, Mizote Ruka and Uchimura Risa will be graduating from the group on January 11th, 2019.

We have been following them for almost 15 years now: the four members of 9nine have also appeared on stage, dressed in beautiful white dresses. The softness and aesthetics of their songs have soothed the atmosphere at the Yokohama Arena. The group had also prepared a special medley composed by 5 of their biggest titles only for the event, as a little extra bonus to delight the fans! 9nine made their comeback on the American continent this spring by being invited to the Animazement 2018 festival in Raleigh, North Carolina, USA.

Dempagumi.inc needs no more introduction, but this was their very first @JAM EXPO festival with their new line-up! Nemoto Nagi and Kaname Rin have taken their first steps on the Strawberry Stage dressed in their so kawaii astronaut costumes, in a pumped up atmosphere.
Next January, Yumemi Nemu will say goodbye to more than 9 years of career in the group, and then return to a life away from the world of show business. We wish her good luck for the future!

Extra gallery! We were present for Wyenra’s performance on the Kiwi Stage that same day. The trio is made up of two of drop’s former headliners, Miira Misato (formerly Misaki Misato) and Takiguchi Hikari, as well as her younger sister, Kirara. Wyenra is a self-produced group surfing on the charm of the mysterious Japanese spiritual folklore. If you happen to visit Japan, do not miss their unique style performances – but beware of the ghosts!

This is how our summary of the two days of the @JAM EXPO 2018 main stage comes to an end! We want to thank the festival’s management team for granting us access to these two days of pure madness.
We also apologize for the delay in publication. 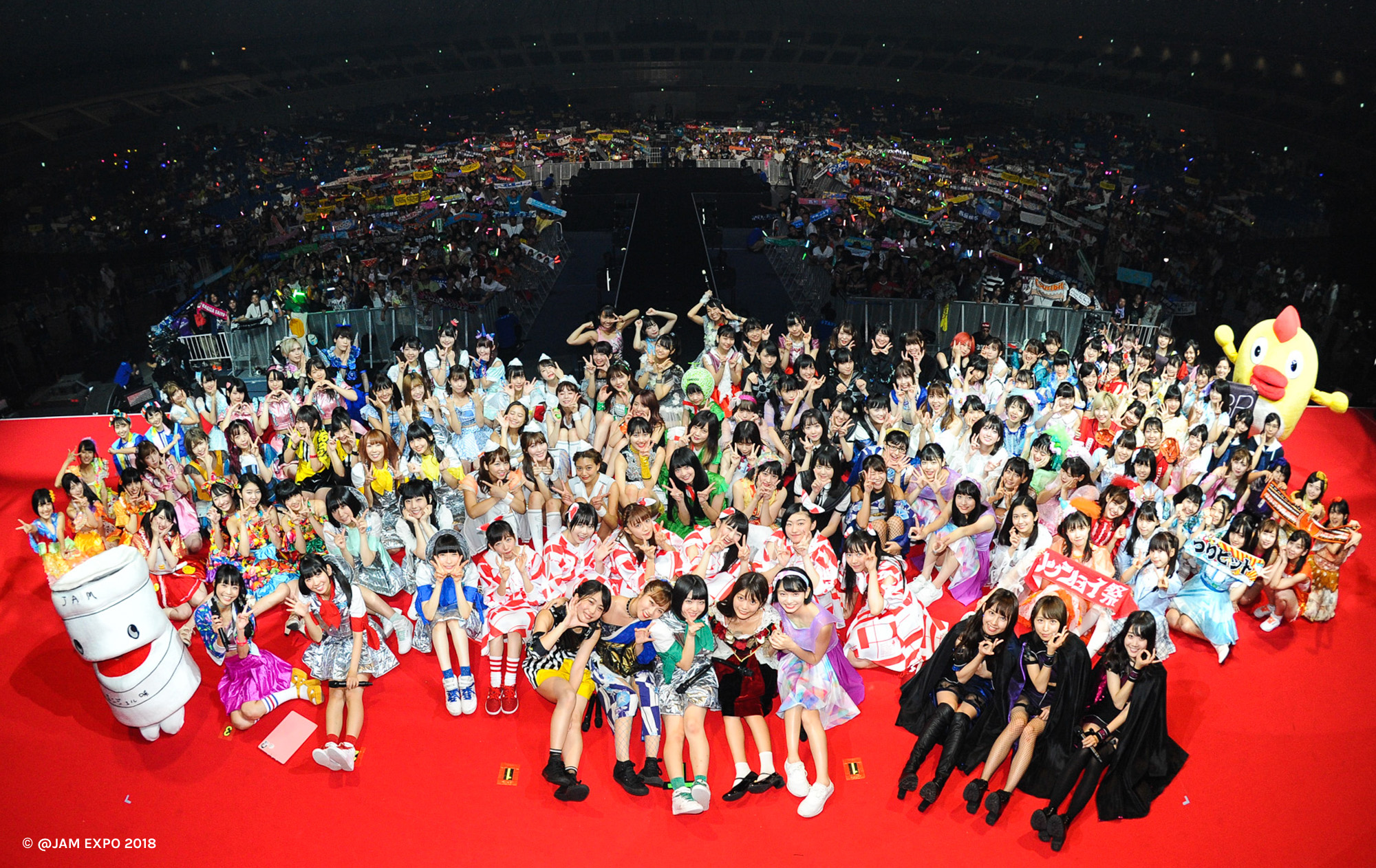 Special thanks to @JAM EXPO for providing us the official pictures for the festival and allowing us to publish these reports.