Awakoi, co-produced by former HKT48 member Tomiyoshi Asuka and HOT DOCK, started their activities over last summer 2020 but the group was able to stand on stage for the first time this March 27th for their solo concert “Watashi, Awakoi shitemasu” at Shibuya studioW.

During this concert, the group revealed new outfits, faced many challenges and announced a first single! 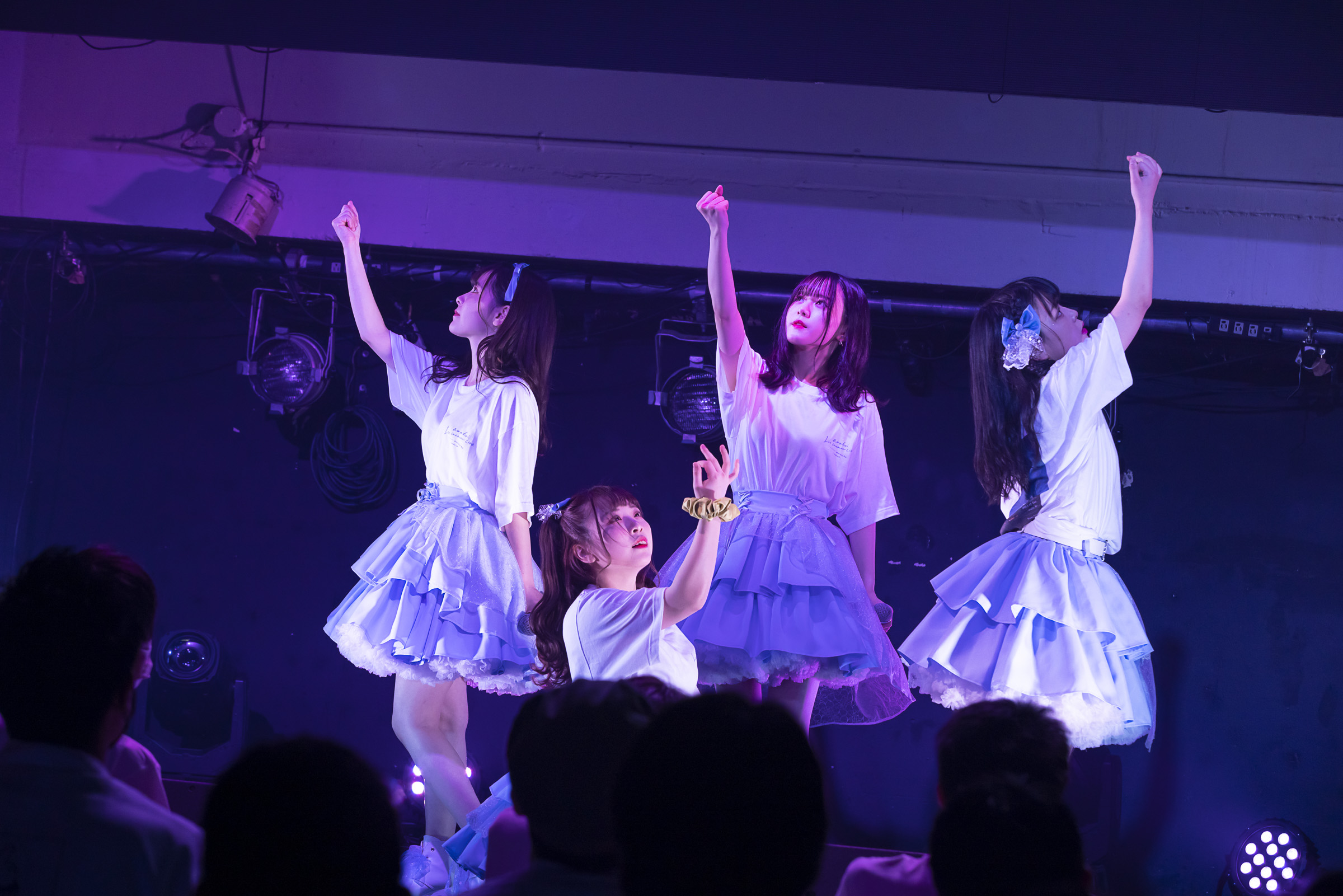 The concert starts with “Noraneko” (wild cats), a song with mischievous lyrics, but full of charm. The four members, a bit shy, had fun posing as cats on stage. The audience was mesmerized by their softness, and started jumping and waving colorful penlights to follow them. Of course, they kept their eyes on the girls’ performance, who kept smiling all along! They followed with “Cinderella”, a soft song melting the fans’ hearts. Guided by a sparkly instrumental, the four girls tried to seduce the audience with individual skills. Their singing and dance moves were sometimes clumsy, but a bright future shines upon them, as the group is filled with young hearts wishing to become their own Cinderella.

After they introduced themselves, each one of them had to take up a challenge. First on the list was Sakurai Mumu, who had to dance on “Panorama” by IZ*ONE. Challenge successfully done with a performance that was both sexy and cute.
Yoshikawa Ami appeared next for a double skipping rope challenge on “Make you happy” by NiziU. After a few tries, the challenge was cleared and she couldn’t hide her joy.
Futaba Yume covered “CHERRY” by Yui while playing the guitar. The audience stared at her with kindness, seeing her softly singing and checking her fingers on the guitar’s fretboard. 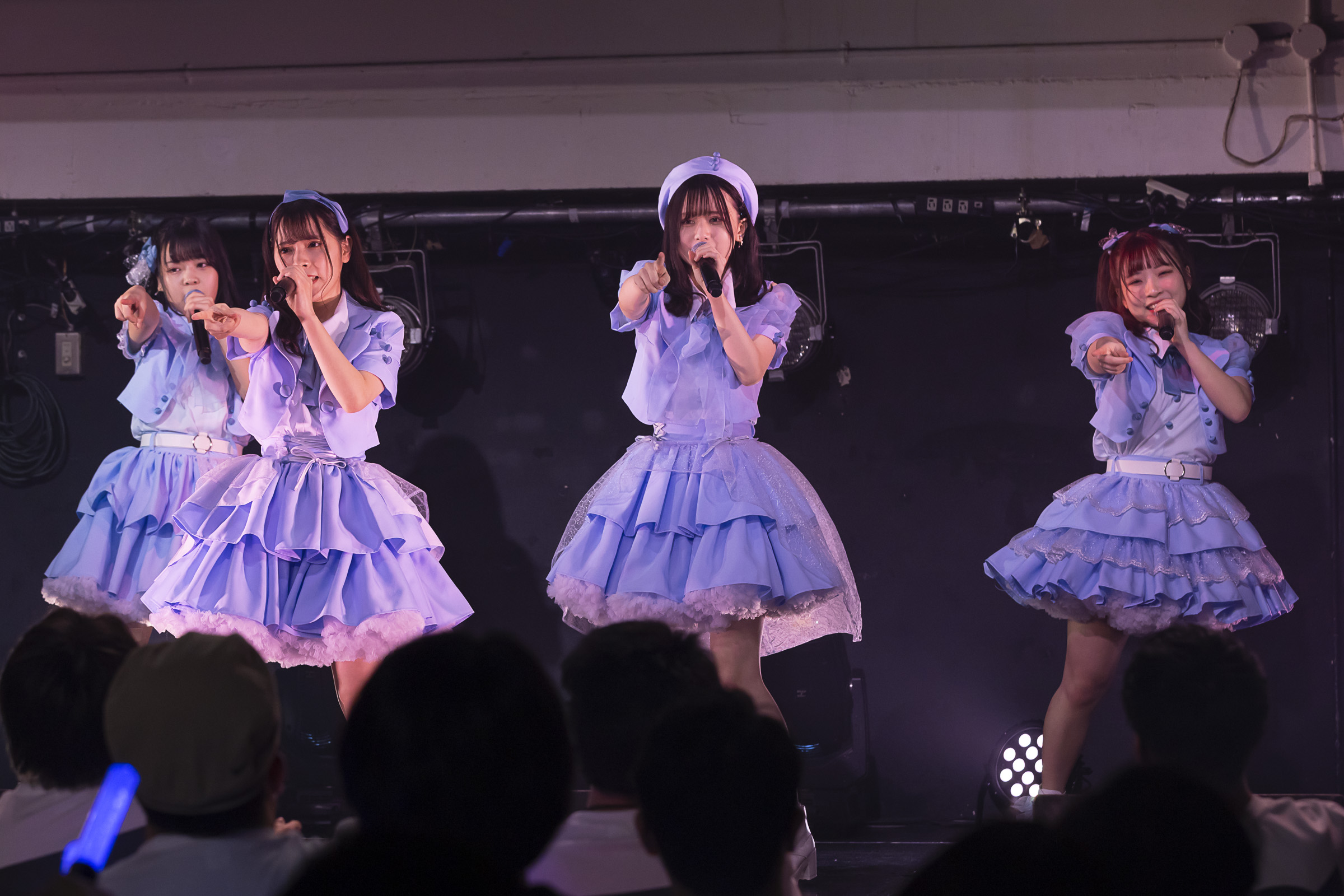 A short making-of footage showing the girls walking along the seaside was presented and the members went back on stage wearing light blue outfits and sang the new track “Shiori”. As they looked like delicate dolls, their harmonized singing and dance moves truly showed their passion.

They went on with “Sun Flower” and danced so dynamically that they seemed to be chasing after a future shining just ahead of them. The lyrics are about a young girl’s feelings for the person she loves, and the group performed with the emotion of a loving girl trying her best to speak up.
“Kurisumasu ni kaita love letter” followed. It is a more pop and dynamic track which follows the usual popular pattern of an idol song. This song delighted the fans, showing their enthusiasm for the girls’ smiles and the lyrics that sounded like a supporting anthem.
Finally, they closed off with a cover of “Sakura no Ki ni narou” by AKB48, with Kawanishi Rise on the piano. Through this performance, the members proved how much of a unique balance the group has. 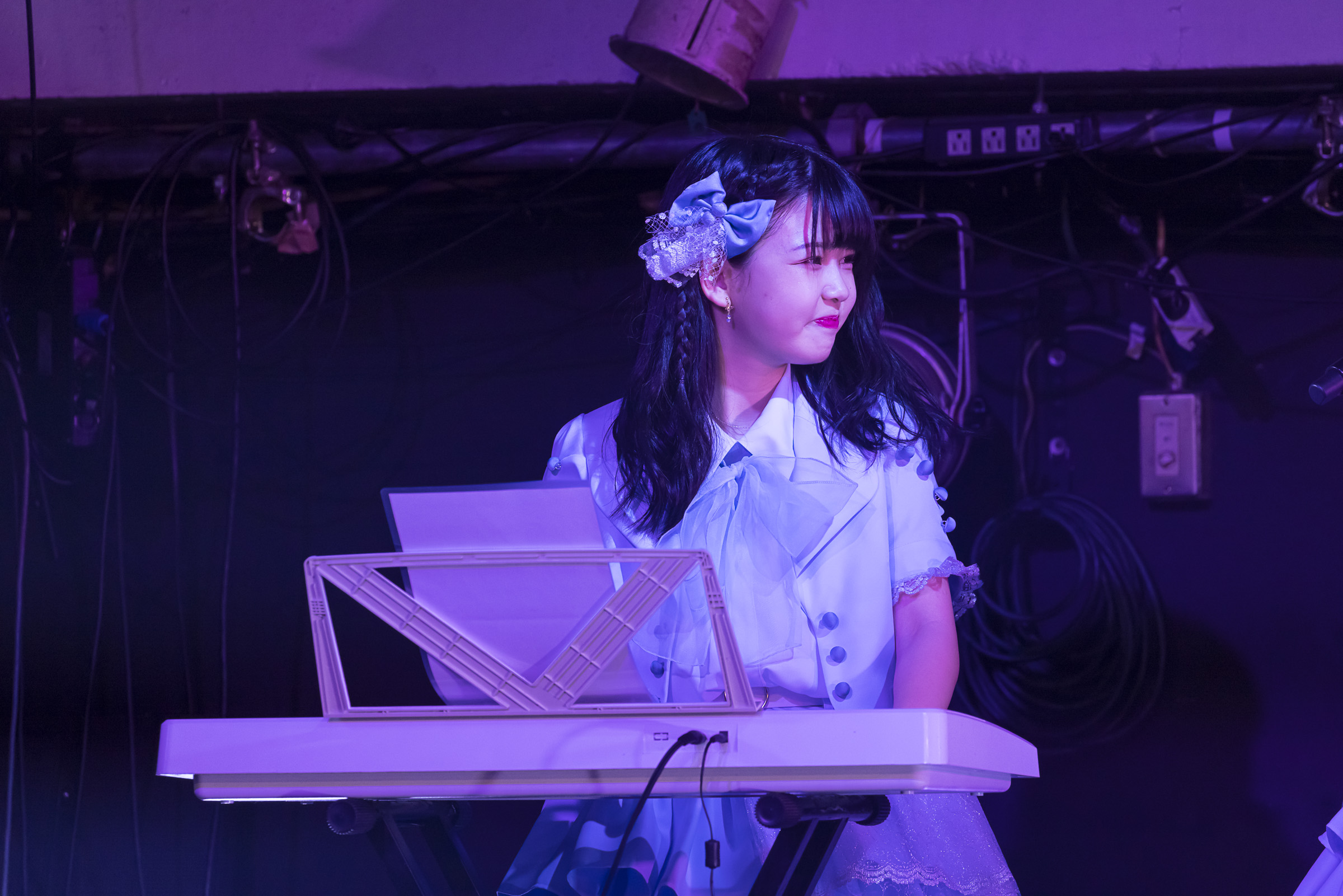 After a strong round of applause from the fans, the members reappeared on stage to perform a new song, “Tsugi no sakura ga saku koro made niwa”. Seeing them dance on stage was reminiscent of twirling cherry blossom petals.
For the last song, the girls performed “Kokoro ne, Biidoro” and the fans went wild, as the smiling members gave all their energy. 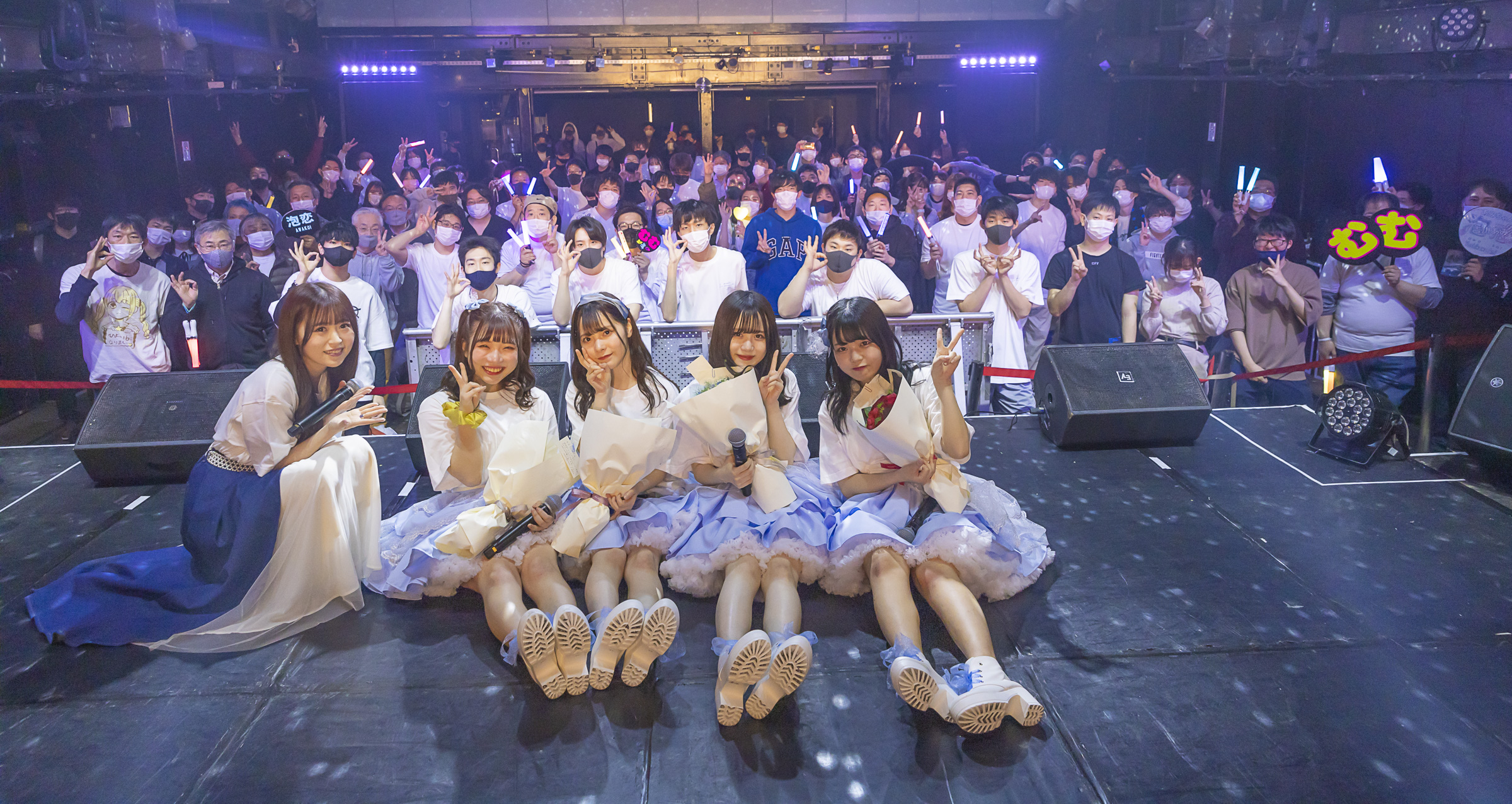 Once all the tracks were performed, the members faced the audience for some speeches. Here’s the translation.

Kawanishi Rise : “We couldn’t do as much concerts as we thought since our debut, this is why we are truly grateful for your support until now. Did you notice how much progress we made in 7 months? We still have a lot of work to do and we are working hard. We count on you for your support!”.

Yoshikawa Ami : “I’m nicely surprised because I didn’t expect so many people to come to see us. I am very happy that I was able to take on this jump rope challenge. I’m not very good at dancing, but today made me want to work harder in order to dance perfectly. I thought a lot during the months that have passed since our debut, and I finally feel like I became an idol.”.

Futaba Yume : “Since the moment this concert was announced, we have been going through some happy and sad times. I’m glad that each of us was able to complete a challenge in front of you today, and it’s thanks to all of you who support us that we were able to unveil new songs for you. Now that my school years are over, I would like to do my best as an idol.”.

Sakurai Mumu : “Every time I see the fans’ reaction when they see us on stage, I am very happy that I became an idol. I want to keep working hard and not take everyone’s support for granted.”.

Lastly, producer Tomiyoshi Asuka appeared on stage to announce that the new songs would have a single release on July 7th. The members couldn’t hold their tears while listening to the announcement. It was Awakoi‘s first concert but no doubt that the group will continue to share their joy and happiness. We can’t wait to see what holds the future for them! 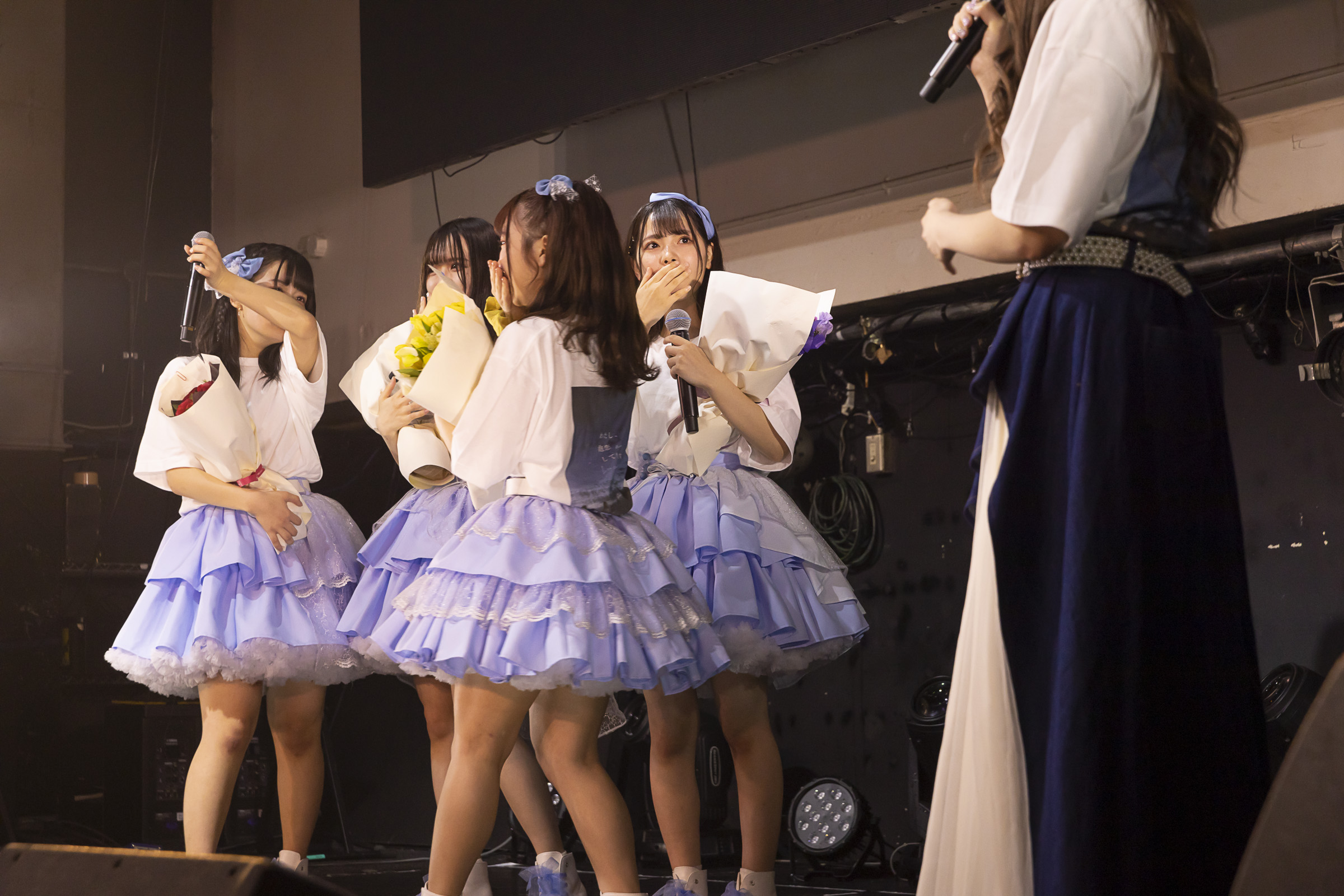 Awakoi – Twitter Tomiyoshi Asuka – Twitter
Thanks to Awakoi’s management for the official pictures.
Article by Nagasawa Tomonori
Translated to French by Angélique and to English by Brice