NECRONOMIDOL turned up the heat at Tokyo Kinema Club on April 30, 2019 for “VVALPURGIS”, their biggest stage since the dramatic transformation of the group a few months prior.

Coinciding with the end of Japan’s Heisei Era in Japan and the beginning of Scandanavia’s Walpurgis Night, there was an air of auspiciousness as the cold rain fell steadily in the hours leading up the raising of the curtain. As the fans descended the spiral staircase and crossed the well-worn parquet wooden floor on their way to the stage, episodes of NECRONOMIDOL’s short film series “BEYOND THE RED” played on the screen at the back of the room.

Blood-red lights rained down upon the stage as NECRONOMIDOL threw open the floodgates with “END OF DAYS”. Accelerating into “phantasmagoria cosmos”, the members sliced at the air and slipped through the fog drifting across the stage.

NECRONOMIDOL turned up the heat, unchaining “Dirge of Baldr” and “Les Tenebres Sans Visage” one after another, the fans raising their voices (and each other) as the members raced across the massive stage. Welcoming the audience, the members introduced themselves to loud cheers and applause before revealing the latest installment of the “BEYOND THE RED” saga. 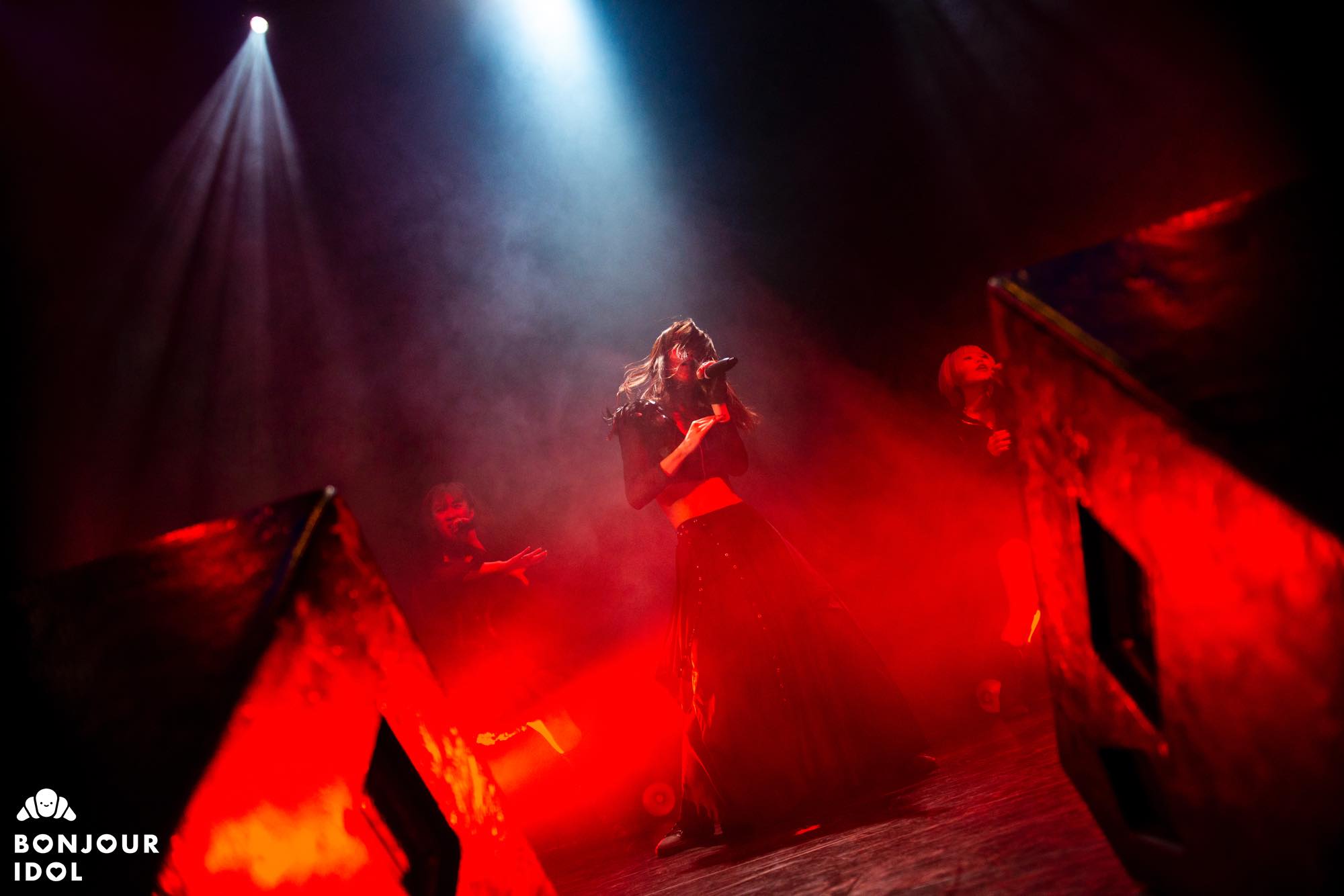 Following the conclusion of the story, at least for now, NECRONOMIDOL returned to the stage wearing hoods and carrying round lamps up to a mezzanine, where a giant statue was revealed. As the darkness lifted, it revealed the members clad in pitch-black outfits designed by Michelle. Befitting their shadowy appearance, the performance was led into the darkness with the haunting strains of “psychopomp” as Rei Imaizumi and Risaki Kakizaki’s vocals soared through the night air. Stirring up the spirits with “HEXENNACHT”, NECRONOMIDOL slammed shut the door on the last lingering remains of winter as they continued into “AZATHOTH” and “Midnight Dominator”. Crashing through the chaotic “SARNATH” and with the heat boiling over with “SALEM”, the members paused to allow the audience to catch their breath and admire the new outfits before locking in to the relentless groove of “WITCHING HOUR”. 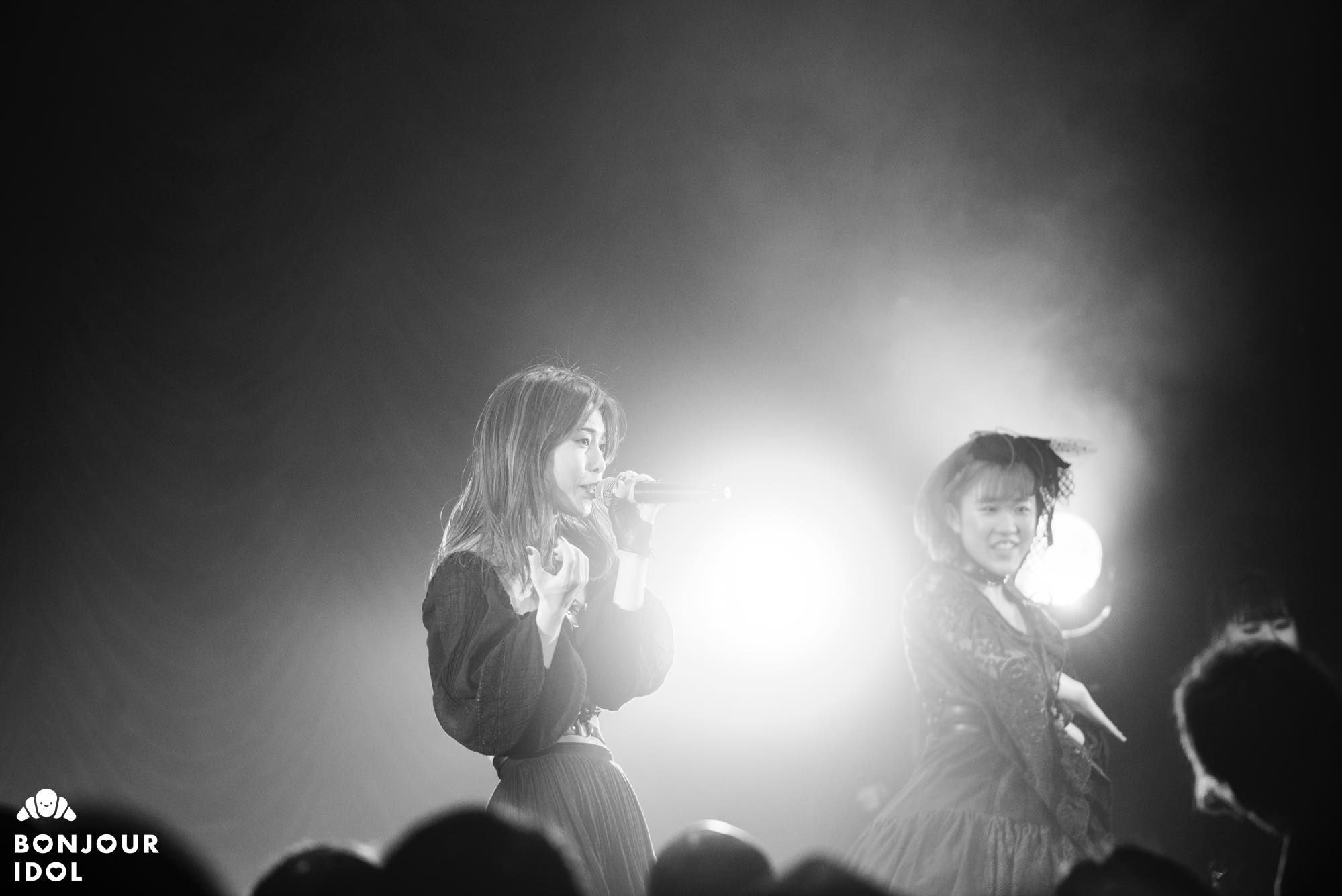 Unleashing the fury and power of an invading army with the anthemic “KADATH”, NECRONOMIDOL sailed into battle, joined by the voices of the fans singing along and even sitting on the floor rowing an imaginary Viking ship as they did! Waves of synthesizers swirling through “STARRY WISDOM” brought with it fans lifting each other towards the stage as the tide continued to rise. Tensions which had been building throughout the evening sent shockwaves through the venue as the opening riff of “SKULLS IN THE STARS” rang out and the floor shook under the weight of hundreds of dancing feet and moshing bodies.

The encore calls began as soon as NECRONOMIDOL left the stage, the crowd erupting again as the frigid winter winds of “ITHAQUA” swept through Tokyo Kinema Club, bringing the long night to an end in a hot-blooded final battle, Risaki Kakizaki’s thundering vocals leading the singalong that echoed into eternity. Thanking the audience, NECRONOMIDOL announced the release of a new mini-album “scions of the blasted heath” in June as well as tentative details about the group’s 5th anniversary festivities.
In addition to their busy schedule in Japan, NECRONOMIDOL will be returning to Europe in July for their EUROPEAN INQUISITION 2019 tour! Whether it’s the beginning of the end or simply the end of the beginning, the current incarnation of NECRONOMIDOL is a brightly burning bonfire amidst the darkness. 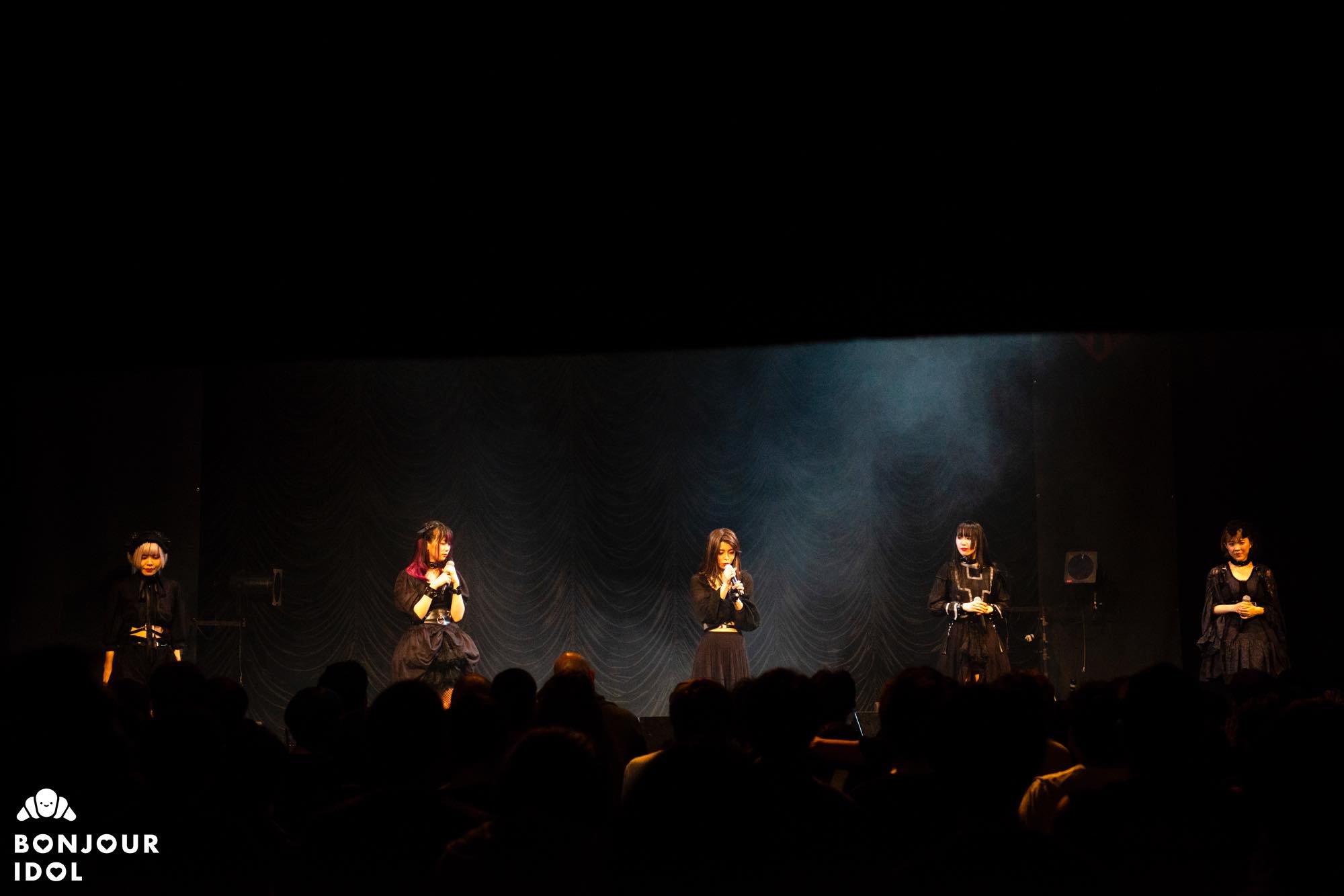 Photos by Nathan Gey
Article by Kai, translated to French by Brice