akishibu project returned to Zepp Tokyo on January 26, 2019 for their 6th One-Man Live “Minasan, Junbi wa ii desuka? Hitoban Kagiri ja Tarinaikamoyo♡”! During more than 2 years since their first time there, a lot had changed for the group, with members graduating and joining as well as their long-awaited major label debut.

As the clock ticked down to showtime, Kera Hinako welcomed the audience to the venue, running through the announcements and riling them up for the performance about to unfold. As the overture rang out over the sound system, the calls of the fans and the glow of 10 different colored penlights of the members filled the air.

akishibu project emerged from bursts of CO2 to start off the evening with their major label debut single “Hola! Hola! Summer”. Continuing on with a pair of their newer summer tunes “Abanchu!” and “Summer☆Summer” and their classic “Eternal Blue ~Kimi to Boku to Sora to Umi~”, they had the crowd heating up from the get-go.

Miyatani Yue excitedly exclaimed that they had finally come back to Zepp Tokyo and Kera Hinako followed up by asking the crowd to welcome her back with an “Okaeri” (welcome home) in response to her “Tadaima” (I’m home). Taguchi Miiro recalled that the previous time that akishibu project stood on the stage at Zepp Tokyo, they and their fans had to brave the heavy rainfall and strong winds of a typhoon to get out to Odaiba.

Keeping the summer mood going, akishibu project sparked up “Yume Hanabi” and “PEACE” on their way to floating through “Natsu Love” as the stage was filled with bubbles. The excitement boiled over for fan-favorite “LOVE & PARADISE”, the floor trembling as the fans danced along to the rubbery electropop rhythms. During “Acting Girl”, Mashiro Riho and Okonogi Ruka showed off their dramatic skills with a tribute to the fairy tale Snow White; Riho playing the princess with the poisoned apple and Ruka assuming the role of the dashing prince. 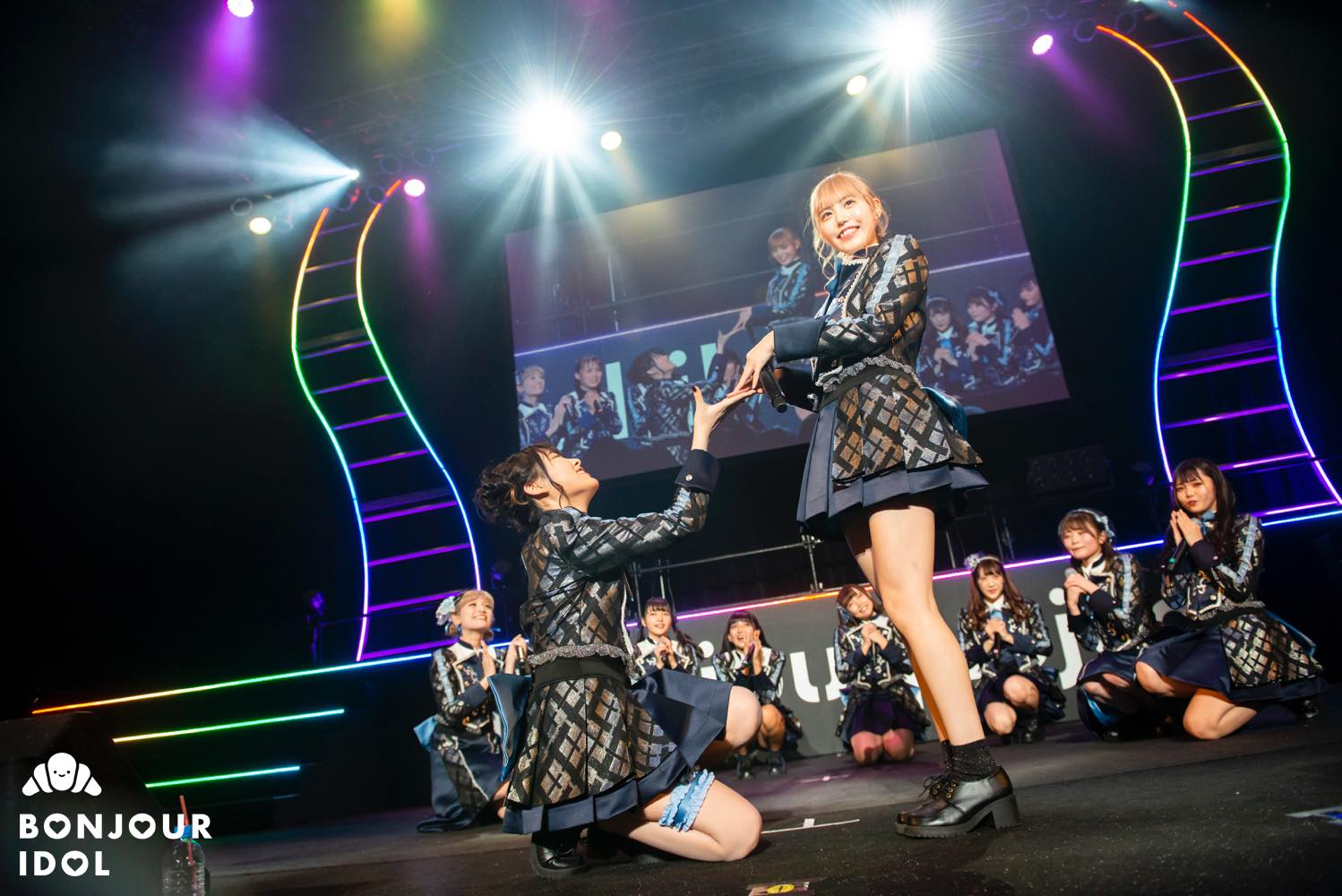 Showing off their new black and gold outfits, akishibu project unveiled a new song “NEXT GATE”, a cool future-retro dance track with sharp choreography. Removing their jackets as the inside of Zepp Tokyo grew increasingly hotter, they chopped the air and threw signed balls into the crowd during “Be yourself”. Picking up momentum as they accelerated into “flower×flower” and “Answer”, the members faded into the darkness after striking a fierce pose.

A video announcing akishibu project’s 7th one-man live at the iconic Nakano Sunplaza on February 15, 2019, complete with a live band was met with excitement but the cheers turned to dead silence as leader Miyatani Yue revealed that she and fellow founding member Kera Hinako would also be graduating from that group on that day, joining Okonogi Ruka, Tsushiro Mizuki, and Hoshino Mahiro, who had announced their graduations on November 16, 2018. Yue explained that she had longed to perform at Nakano Sunplaza and that the plans for her to graduate there had been in motion for a while. Hinako fought tears as she spoke about akishibu project’s plans for the new member audition and the reinvention of the group to come in the summer.
Shaking off the heavy mood, the members led the fans in a series of cheers before launching into “New World”, pillars of CO2 and laser beams filling the air as they sang from the depths of their hearts. The momentum continued to build as akishibu project rolled on with “Kagayaki License” and “Creaction”. Turning up the volume with the party rocking sounds of “AKISHIBU SHIP”, the energy peaked hard again, the crowd going wild during “Akishibu Way” and swinging their towels to “Re:Start”.

akishibu project began the encore with another of their classics “Midarekami Fighting Girl” before taking the customary commemorative photo with the fans in the background. Paper hearts fluttered down from the rafters as the members skipped and waved their hands in heart kechas to “Candid Love” and streamers followed as akishibu project launched into the final song of the night, “Manatsu Serenade”. Joining hands, the members shouted their thanks to the audience and took their bows before leaving the stage at Zepp Tokyo in their current formation for the last time.

Just as Akihabara and Shibuya represent disparate ends of Japanese youth culture so goes the story of akishibu project, the group with the concept of melding the two. As they move forward and upward, they continue to evolve and change, reinventing themselves as the gauntlet is passed to the next generation. Things cannot return to how they once were, but it should be exciting to see what becomes of akishibu project as they pass through the “NEXT GATE” as they continue their journey to the “New World”. 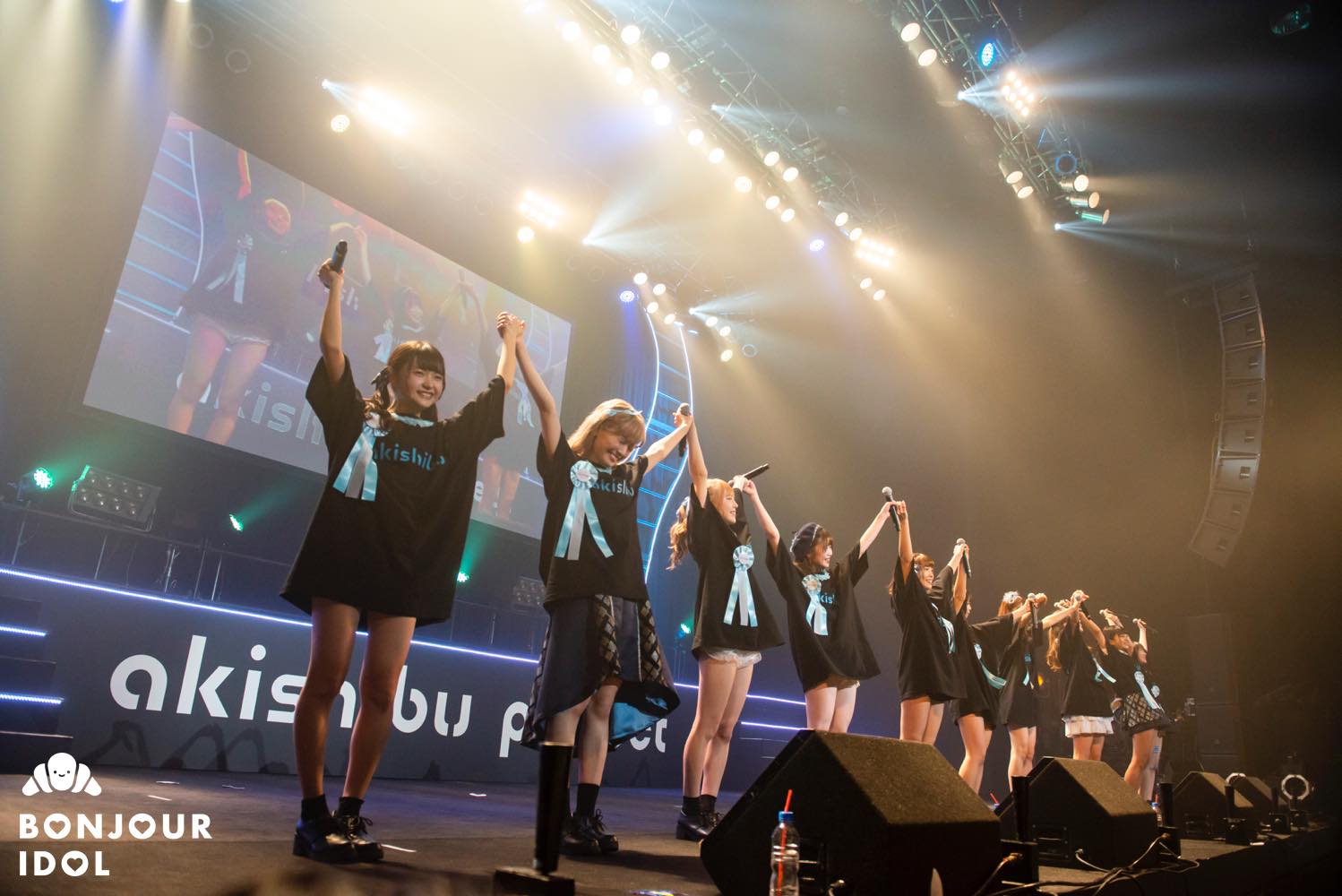 Photos by Nathan Gey
Article by Kai, translated to french by Brice