Each year, Japan Expo, the biggest European convention on Japanese pop culture, has its share of exclusive guests!
The 2018 edition Japan Expo took place from July 5th to 8th at the Villepinte convention center in Paris.

For this 19th iteration, the convention’s staff went all in to invite all kinds of idol guests, just for us fans! 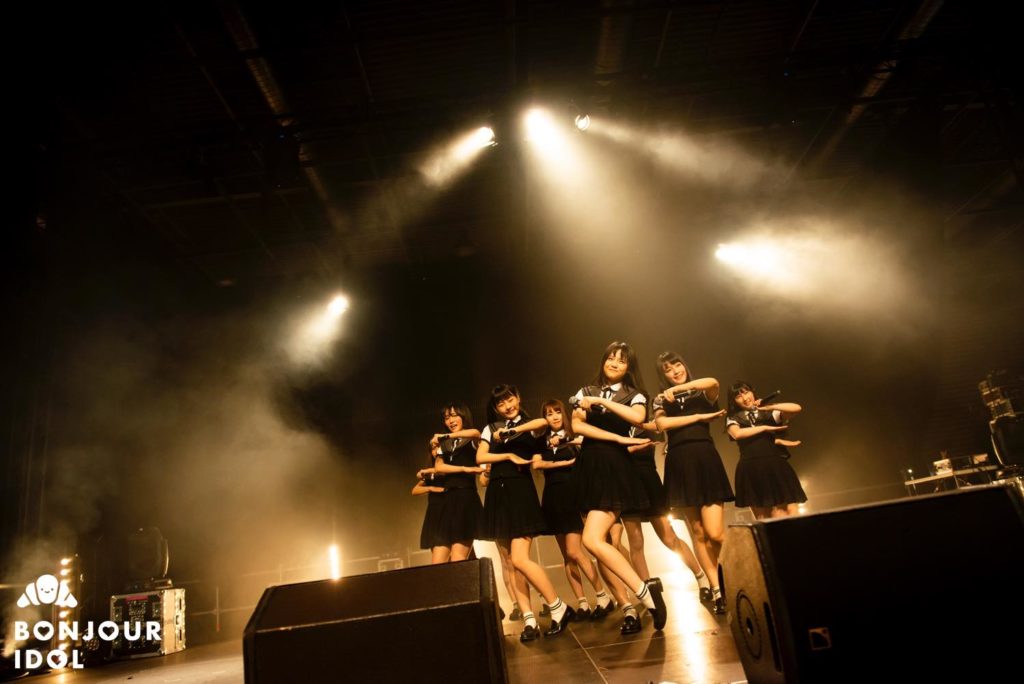 The first group and the most anticipated one was without a doubt =LOVE, produced by Sashihara Rino, the now nation-wide famous member of Fukuoka-based idol group HKT48!
The group, made of 12 members, held several events stretched out throughout all 4 days, including two concerts on the two biggest stages the convention had to offer.
The first one took place on the ICHIGO stage on Friday, July 6th from 5:10pm. The famous cosplay event “Europeran Cosplay Gathering” takes place on this very same stage every year. For a first appearance in France, the 12 girls knew how to showcase their style, and the fans were really surprised by their professionalism for such a young group. They started off with their first single “=LOVE”. Next was a talk segment in which Saito Nagisa was shocked to hear the audience singing the French version of “Happy Birthday”, a gift from both French and Japanese fans present.
Saito Kiara also had her momentum with her song “Kiara, Tasuke ni Kita zo”, followed by “Bukatsu-chu ni Me ga Au Natte Omottan da”. The group ended their first live performance with their latest single “Teokure caution” where – we need to point it out – Noguchi Iori reveals the full extent of how to put on a real show with high spirits!
As the members left the stage, the fans felt both very impressed and joyful, and were now anticipating =LOVE’s second show even more.

Fans didn’t have to wait long as =LOVE’s second performance was on the following day, on Japan Expo’s KARASU stage. It was their main concert as this one lasted 45-minute as opposed to a 20-minutes set for the first one.
The setlist was 7 songs long and the first song to resonate in the venue was “=LOVE Numa”, filling the audience with communicative cheerfulness. The first MC allowed all the members to introduce themselves in French. Saito Nagisa’s song “Todoite LOVE YOU” took over and the members snatched the audience with mischievous winks.”Kioku no Dodo ka de” and “Kiara, Tasuke ni Kita zo” followed up and a second MC closed the first part where, once again, the members tried to speak French.
Their second single “Bokura no Seifuku Christmas” and their latest title “Teokura caution” heated the stage all the way up! Finally, the show beautifully ended with “=LOVE”. 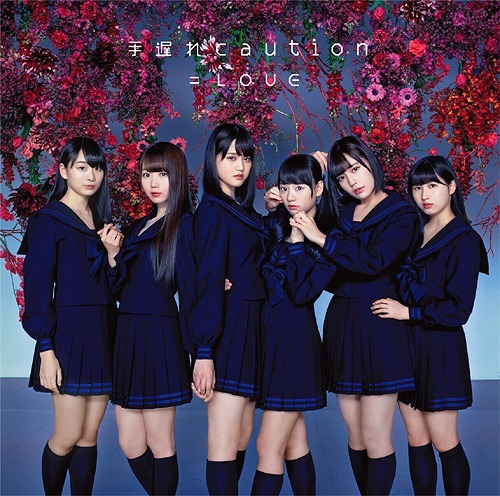 =LOVE were not the only one that triggered the fans’ interest. High profile indie group Maneki Kecak also made their first appearance in Europe! 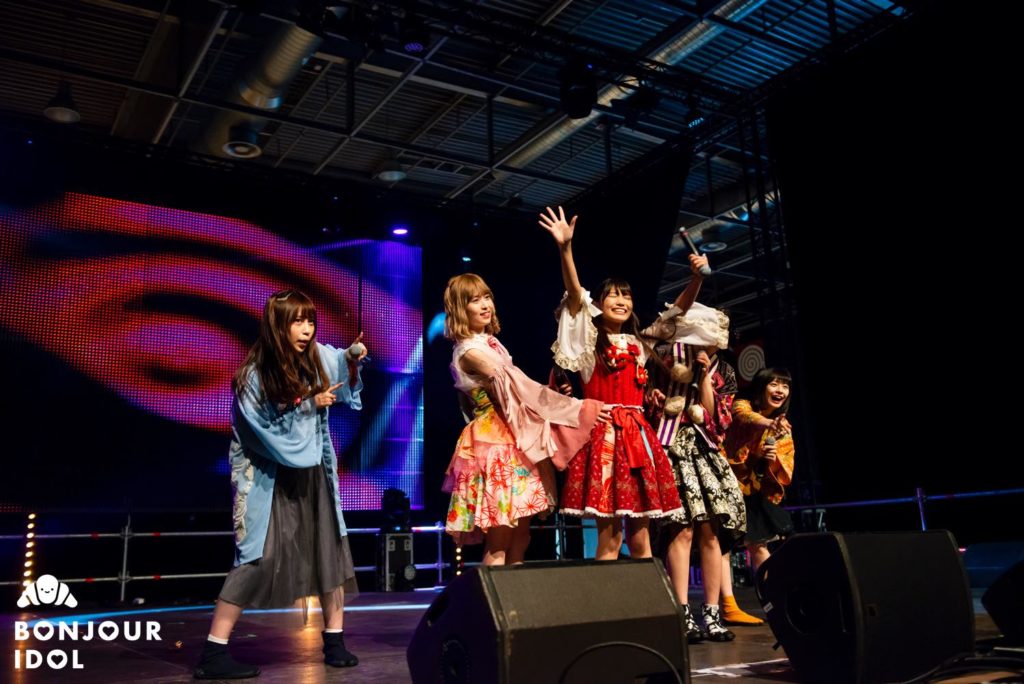 With fewer members but just as much charisma on stage, the girls set the venue on fire on the first day of the festival with a 45-minute showcase on the KARASU stage. Starting off with their iconic and extremely popular “Joudan janai ne”, Maneki Kecak directly showed off their style and the audience dove head first into an energetic mood.
After a brief introduction in French, “Kimi no Todoke”, “Arikitari na Kotoba de” and “Kagami no Naka Kara” managed to bring an even crazier ambiance.
During the second MC, we noticed that the girls learned some basic French, as they asked the audience one after another “Everything’s alright, guys?” or “Are you doing fine, young people?”, surprising everyone, who responded with full joy. The horrific vibes from “Monster to Kecak” and their last single “Atashi no Nokori Zenbu Ageru” followed up. Their first major single “Kimi wa Zurai” closed this performance, in which Fujikawa Chiai, Matsushita Reona and their comrades revealed their amazing vocals to an audience that was already quite impressed.

Fans had the opportunity to see Maneki Kecak one more time the next day, on Friday, July 6th, with a short 20-minutes set on the ICHIGO stage. 3 songs led to the MC, after which the 5 girls shared their interest towards foreign countries as they sang “Ai Kotoba”, which includes the expression “I love you” in several languages in the lyrics.

These two performances were a success, right before their next one-man live in the legendary Nippon Budokan in Tokyo on September 24th! Hopefully some foreign fans will be able to be there! 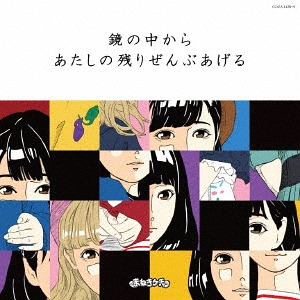 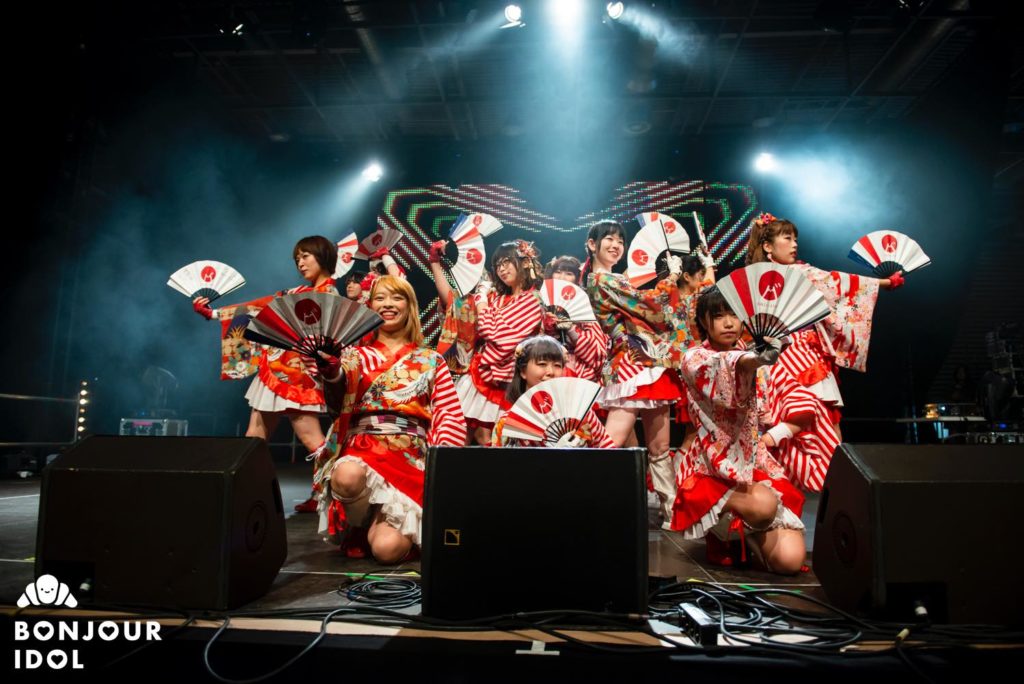 Tokyo Candoll contest winner, BANZAI JAPAN (whose interview can be read here), started in full strength with their most recent song “Konya mo Tottemo Dance de Zansu!” and “Negaiboshi”, followed by a MC to introduce the group’s concept.
The atmosphere of Japanese summer festivals invaded the hall, especially with “Ooedo Parade”. A radically different tone followed up with “Shingetsu Sakuyo no Kakurenbo”. “Sensu ga Nai !!!!!”, “Kono Hana Sakuya Hime” and “Coordinate to Future” kept the spirits up and “Yamamoto Nadeshiko no Hi ga Noboru” set the stage on fire for a fiery end, closing on their two most popular songs, “Banzai Ondo” and “Banzai Japan”, filling the venue with an inexhaustible dynamic energy.

Armed with their folding fans produced exclusively for the event, and outfits inspired by Japanese kimono, BANZAI JAPAN won over the French audience with their never-ending smiles and songs inspired by traditional Japanese music. 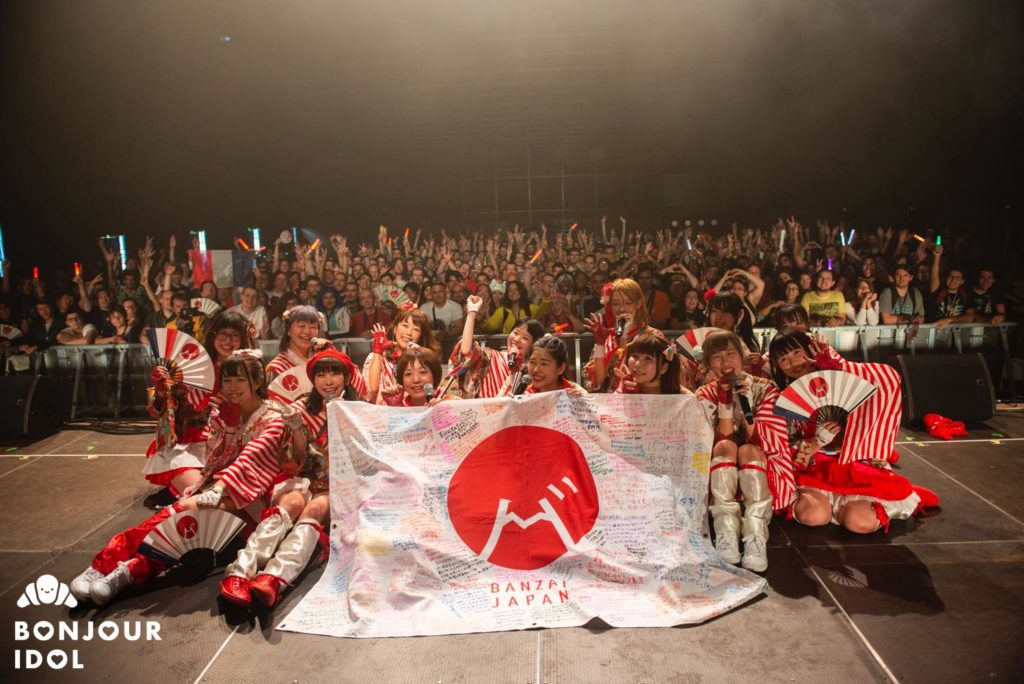 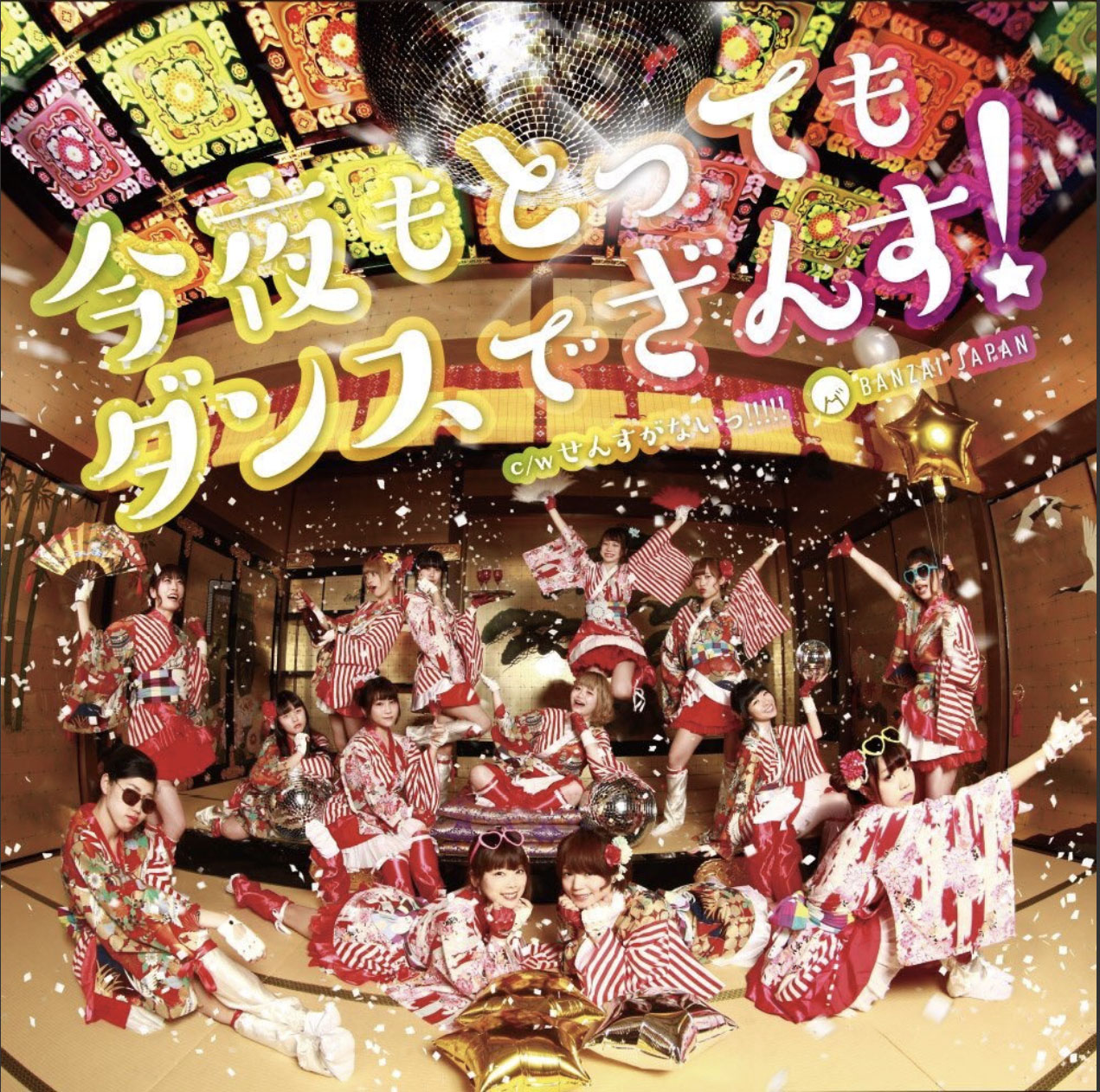 Once again, Japan Expo was rich of idol guests and events throughout these four days! We have lot of hopes for next year’s edition since it will be the 20th Anniversary of the biggest festival about Japanese pop culture in Europe.
We have more exclusive content from this year to show you very soon, stay tuned!