What a fiery first half of the year for ANGERME! Less than one week after their fourth concert in Nippon Budoukan in five years, the ten angels conquered France for their very first live performance outside of Japan on June 3rd.
This historic event was a prologue to their first tour abroad set up to start on June 29 in Seoul, with performances in Hong Kong and a final day in Taipei. 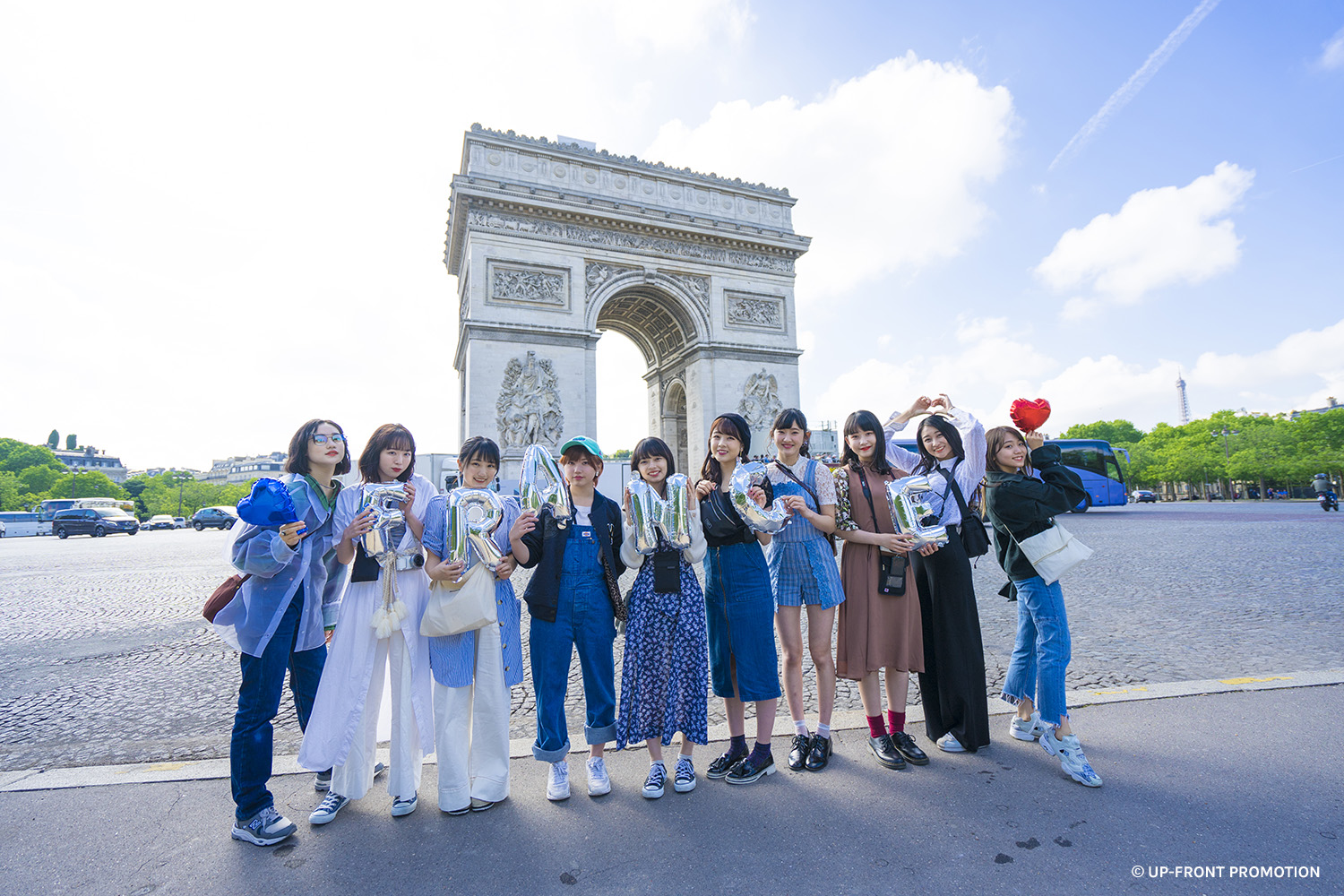 A fiery opening act by Amaitsuki

The concert starts with an opening act by Amaitsuki, a French amateur dance and vocal cover group. They were selected amongst thirty contestants from all over the world to warm up the audience before the main show.
The lights go dark, glowsticks are shining, the audience screams and the excitement is there! The atmosphere becomes electrified on a keyboard tune, when the powerful beats of “Oh my wish!” open up for the show. The fierce and upbeat Morning Musume single then makes room to the cheerful “Sakura Night Fever” (Kobushi Factory), welcomed by excited cheering.
Twelve minutes was all it took for them to make the entire venue even more hyped up for the night. Amaitsuki then thanked ANGERME and 33 Degrees (who also organized the previous Juice=Juice and °C-ute concerts in the past years) for giving them, by pure chance, the best gift that was ever possible for their group’s 10th anniversary.

Time for the show!

Wearing beautiful silvery short dresses, the members of ANGERME step on stage on the electro vibes of their latest single “Nakenaize… Kyōkan Sagi”. Kamikokuryo Moe shined while dancing in the middle of the stage, joined by Sasaki Rikako, then Wada Ayaka, starting the chorus with all her energy. The tone is set, on a song with a catchy chorus that allows the audience to cheer with all their might.
The tension is up, the girls are ecstatic to be performing in France and they are giving their all from the very first second.
The songs are flowing with a crazy energy. “Manner Mode”, “Ai no tame kyou made Shinka shite kita ningen Ai no tame subete Taika shite kita ningen” then “Gashin Shōtan”, this last song allowing the audience to admire the sharp choreography on a slower tempo, while engaging in a fiery call and response with their idols. 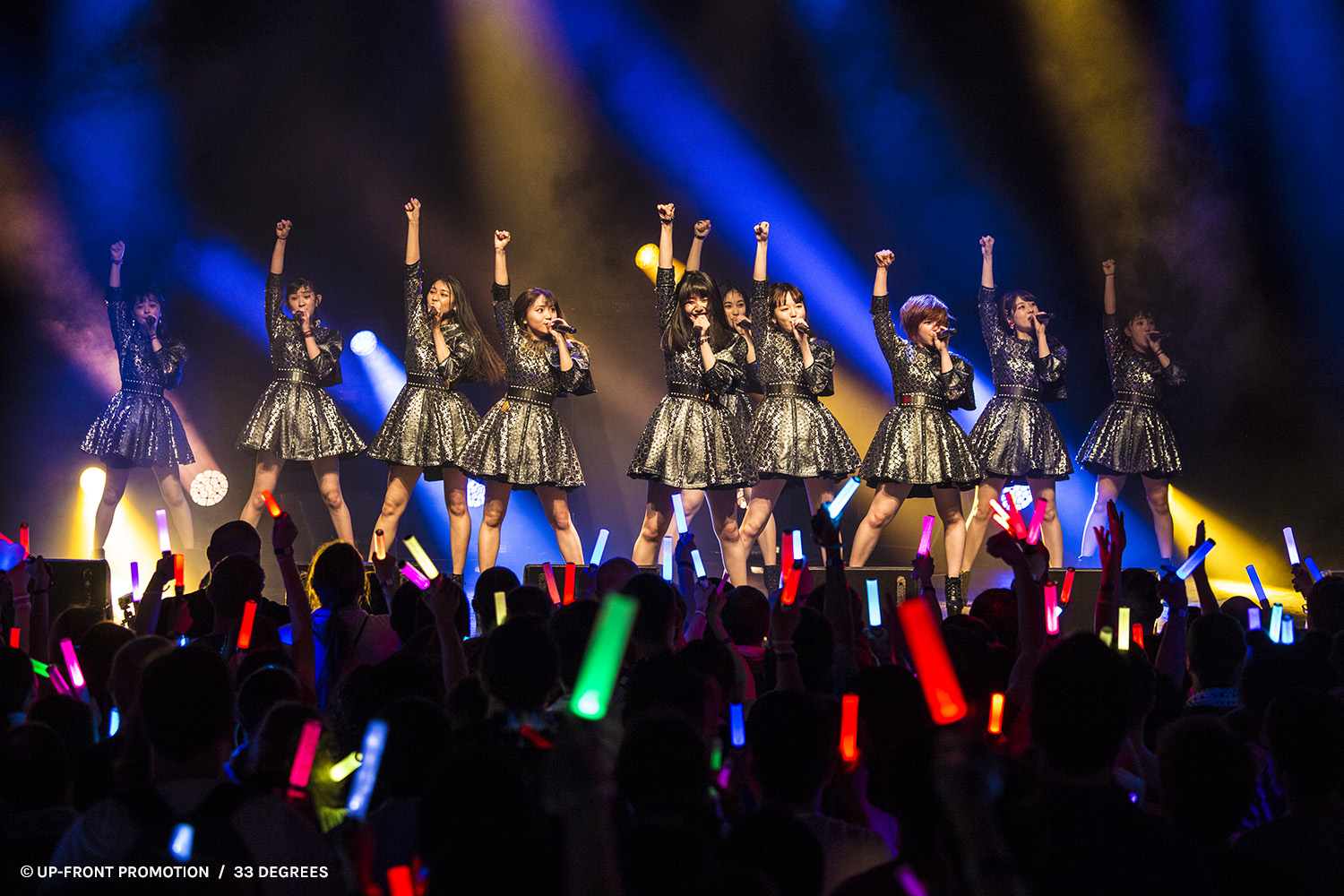 After four exciting songs, the members take some time to change their costumes and introduce themselves in one of the usual MCs.
“Bonsoir tout le monde” (Hello everyone), says charismatic leader Wada Ayaka, expressing herself with no apparent difficulties in the language of Edouard Manet, her favorite Impressionist painter. She also reminds everyone of fellow member Nakanishi Kana’s birthday coming up soon, and a cake is brought on stage, with an emotional smile from Kana.
Each one of them introduces herself in French, Rikako using some cheat sheets hidden in her palm, triggering some laughter in the audience. Moe struggled a little too. “Je viens de Paris? (hesitates) Je viens de Japan ! Qui est français ? ” (I come from Paris? (hesitates) I come from Japan! Who is French?) she innocently says, and her adorable attempt was worth a round of applause from the audience.
Ayaka speaks for the group once again, and it is time to start the next part of the concert. 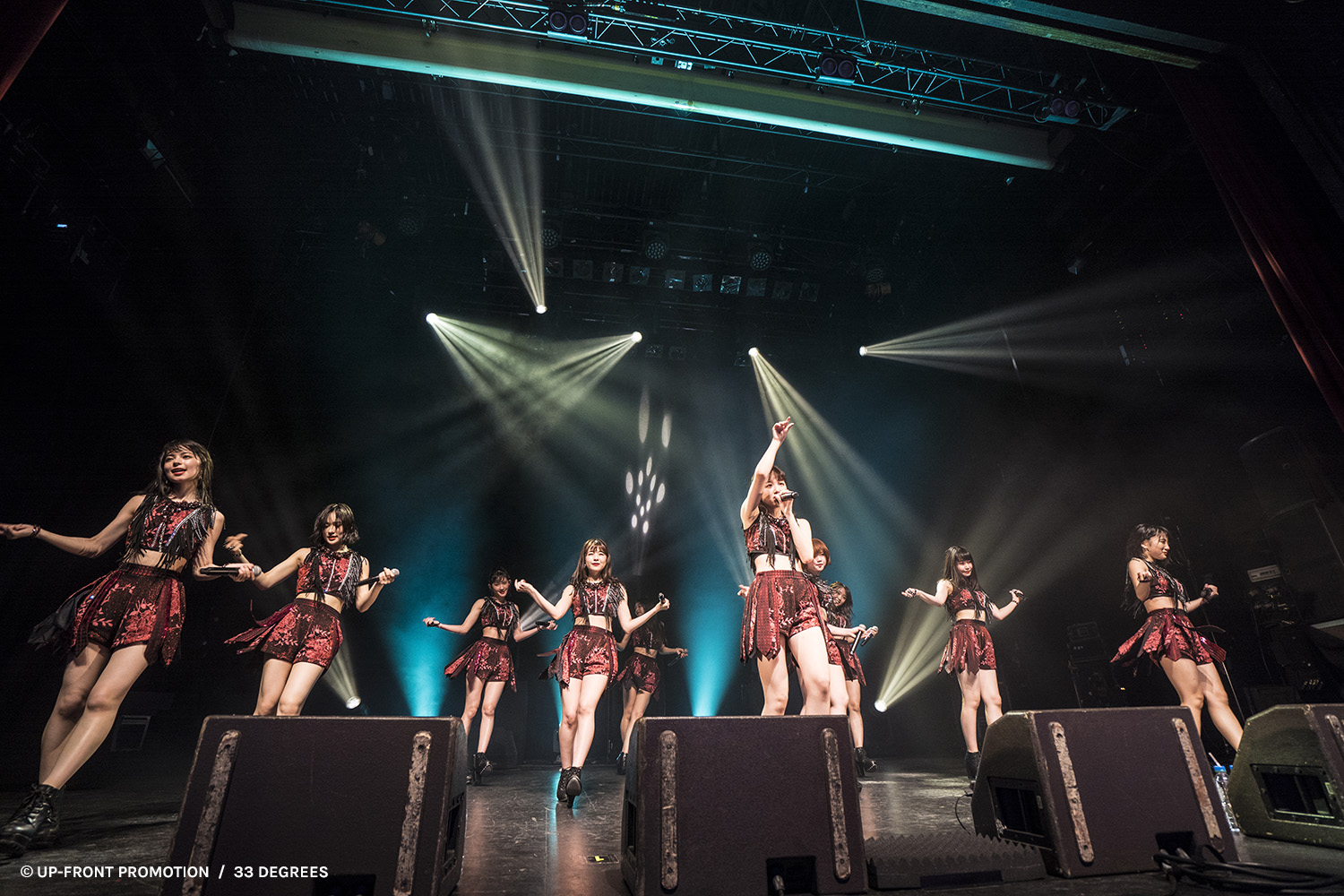 Starting again with the catchy “Koi Nara Tokku ni Hajimatteru”, the mid-tempo beat allows the audience to listen to their idols’ beautiful voices. This charming ballad ends and leaves some room for the symphonic intro of “Nana Korobi Ya Oki”.
ANGERME gets everyone even more fired up from the stage thanks to the aggressif riffs of “Desugita Kui Ha Utarenai”, composed by former member and former guitarist of LoVendoЯ, Uozumi Yuki.
Murota Mizuki mesmerized the audience with her dancing skills, and Takeuchi Akari gets everyone’s pumped up with talent.
It was then time for some magic with “Majokko Megu-chan”, the cover of an anime opening song from the 70’s, matching the idols’ cute side perfectly. As it is a more fun and light song than the usual cool tunes Angerme delivers, the fans were pushed into reproducing the choreography and dance with their idols from the audience.

In a new talk time, each member now share their best memories from their trip in France. Katsuta Rina is delighted that she was able to do some shopping and buy some beautiful brand new clothes. We also learn that Kana impulsed-bought several kinds of cheese and that Kawamura Ayano loved the wallpaper and furniture from Victor Hugo’s bedroom, from their visit of the house in which he died in Paris.
Kasahara Momona then also expresses her love for France, its culture and its heritage. Her trip in the French capital will be an unforgettable life experience. 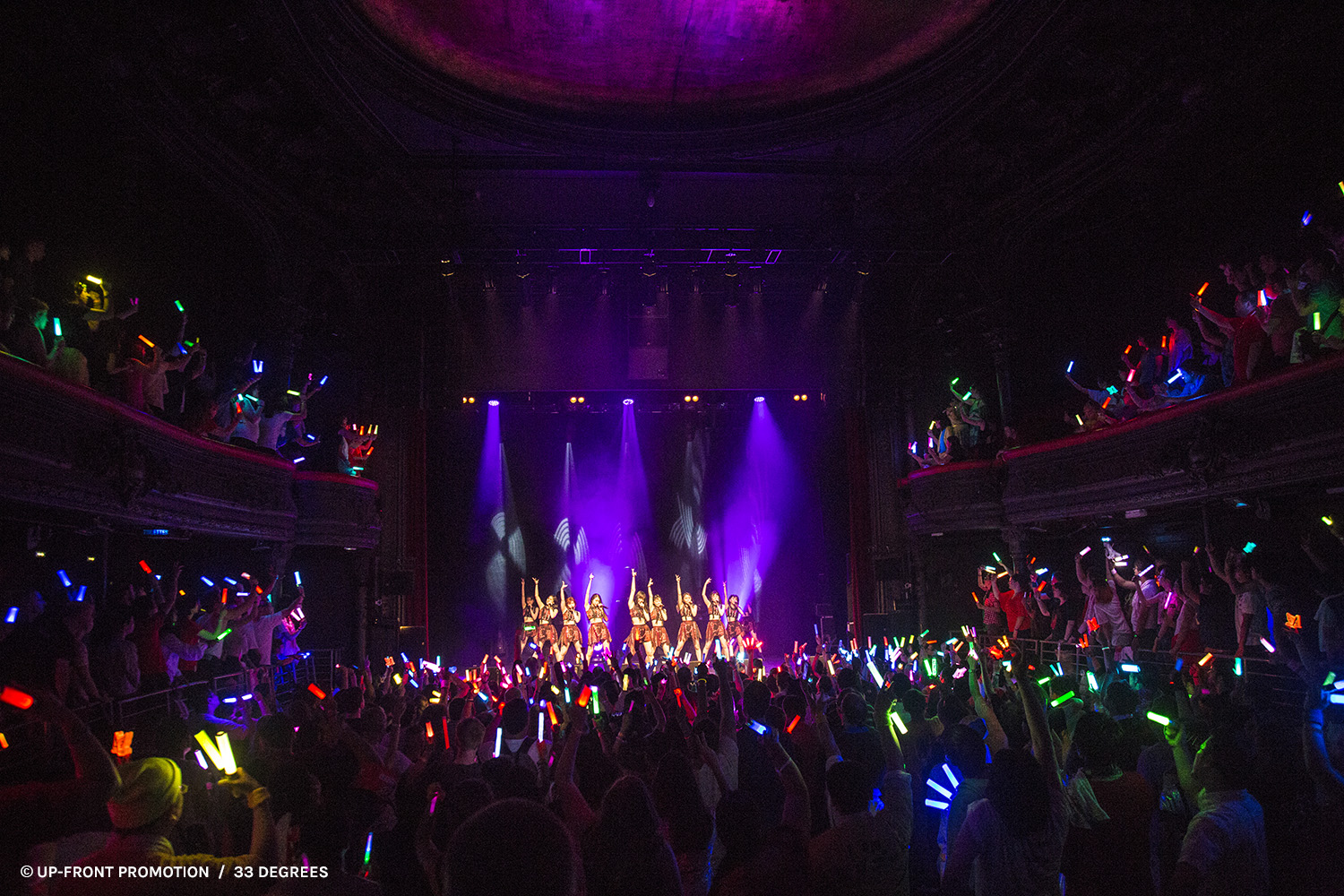 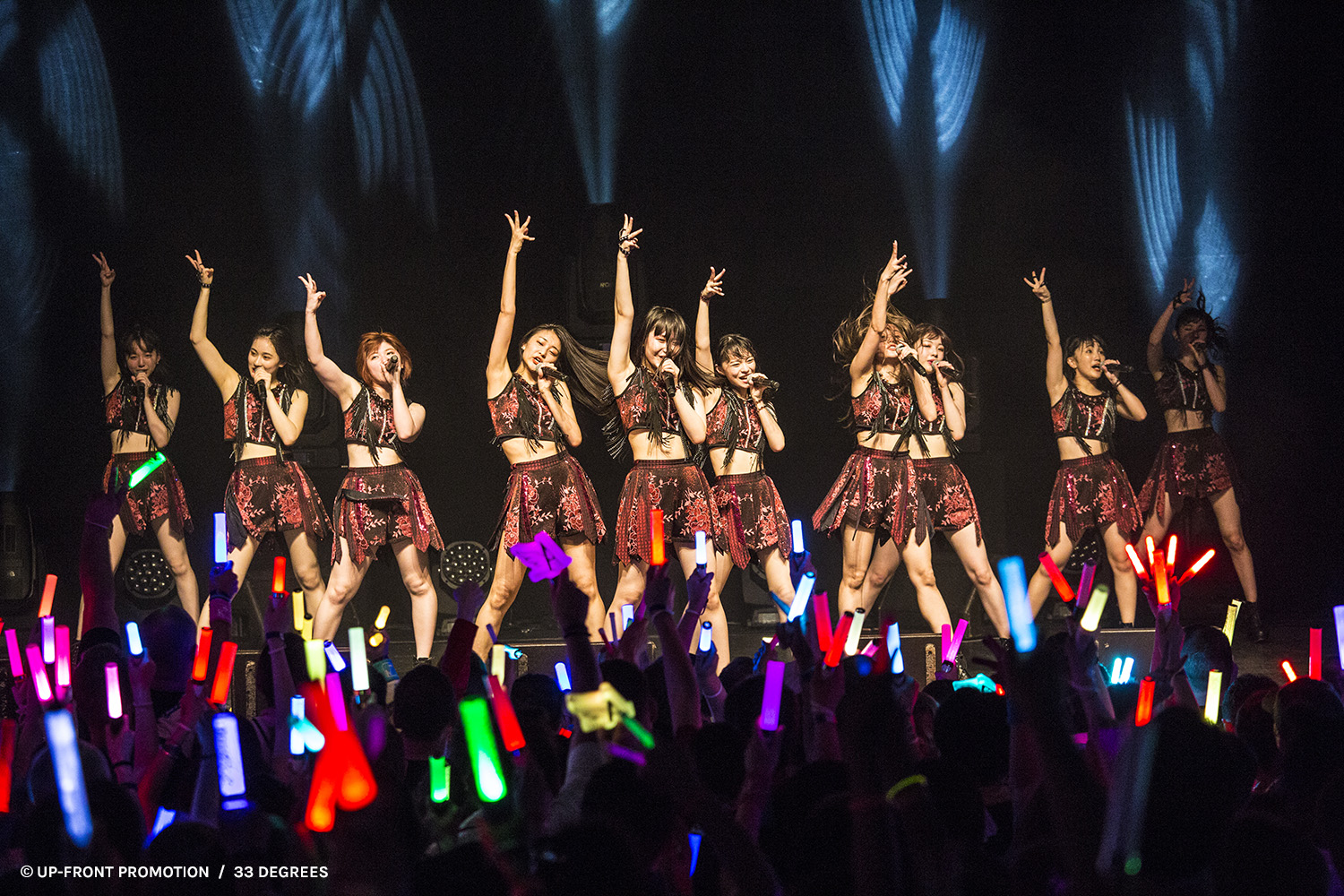 The girls seem to have had the time of their life in Paris, and are now ready for the third round, starting with a blast on “Tsugitsugi Zokuzoku” and earworm of a chorus! The members then deliver their best dancing skills in a series of solos, with Ayaka, then Rikako, supported by vocals from Mizuki and Akari, the communion between the stage and the audience reaching new heights.
The balance between intense and fierce songs and sweet moments is kept with “Aisae Areba Nanimo Iranai”, and the mellow tones let Akari showcase her beautiful voice.
La Cigale gets fired up again when the electro vibes of “Otome no Gyakushū” resonate in the room! The excited collaboration between Europe fans and Japanese fans lead to calls as powerful and sharp as if we were in Japan.
The electric guitar opens the final round with “Dondengaeshi” and its fast tempo, and Murotan’s amazing vocals lit up an exciting fire on stage on “Taiki Bansei”. The members then bow one by one in front of the fans, located in both the standing area and the balconies, and leave the stage, ending the main show. 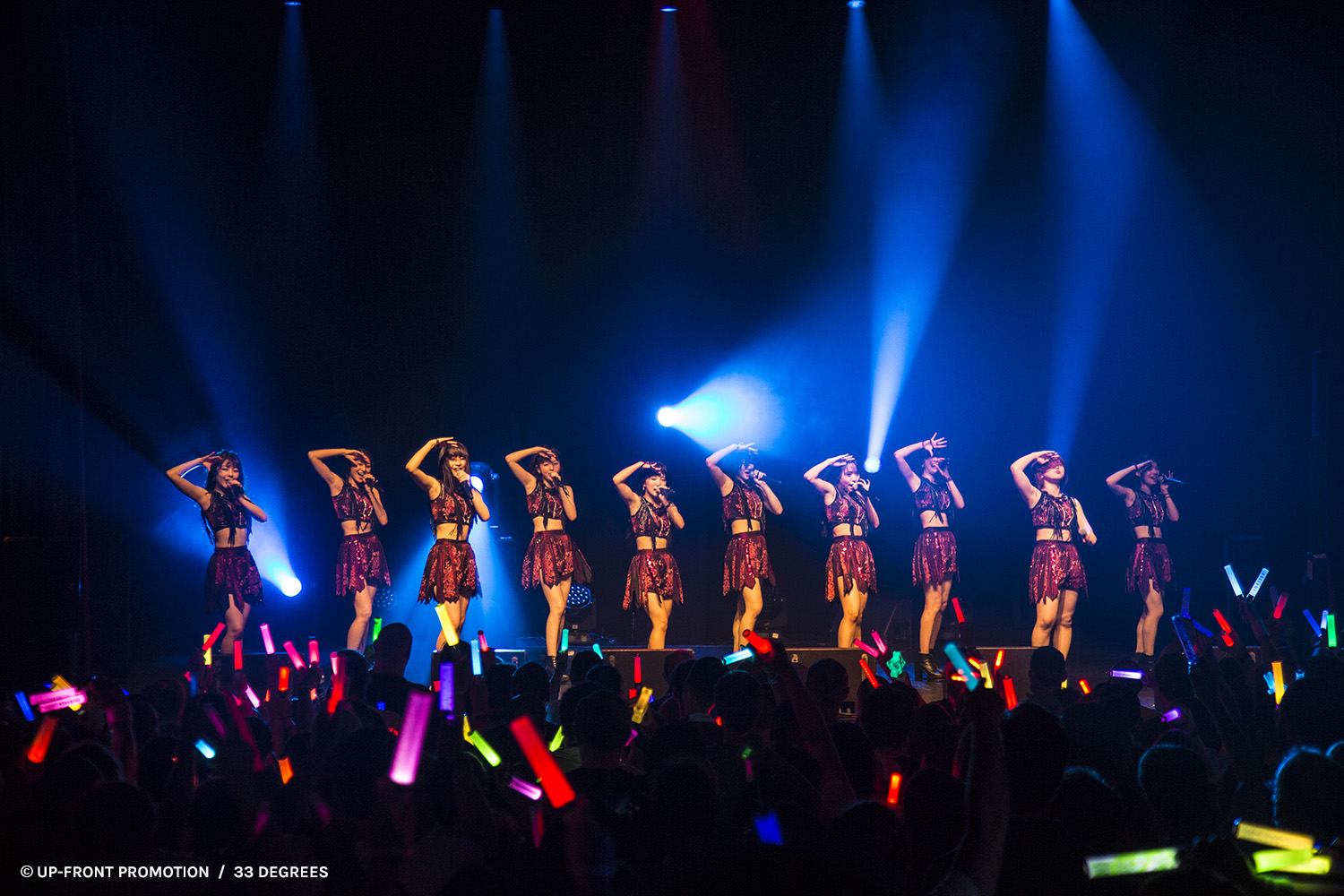 A slowly rumor rises, first trembling, quickly rising to some impressive levels. “Yes, Yes, We are Friends! Yes, Yes, We are Friends Forever!”, the lyrics from “Tomo yo”, are sung by the entire audience, in a powerful and emotional chorus, replacing the usual encore call. As leader Wada Ayaka announced last month that she would graduate from the group after their next Spring tour, the fans needed to show her their support in this tear-jerking testimony of pure love.

Despite the lack of Rikako and Moe, whose condition was not strong enough to stand on stage again, their eight comrades show up again, wearing the special Paris concert tee-shirt they each had customized. Much to her surprise, Kana spots the special banner hanging from the main balcony for her birthday, and sheds a tear.
The eight adorable angels end the concert the same way it started, with a song from their latest single, “Uraha=Lover”. This last ballad seems like a response to their fans’ calls, inviting them to love them even more.

It is in this supportive and loving atmosphere that the very first European concert of Angerme ends! After some “Merci Beaucoup” (Thank you very much), some “Je vous aime” (I love you) and even a mysterious “À bientôt gozaimasu” (See you soon “gozaimasu”), the girls disappear backstage, leaving their fans with stars in their eyes and an unforgettable experience. 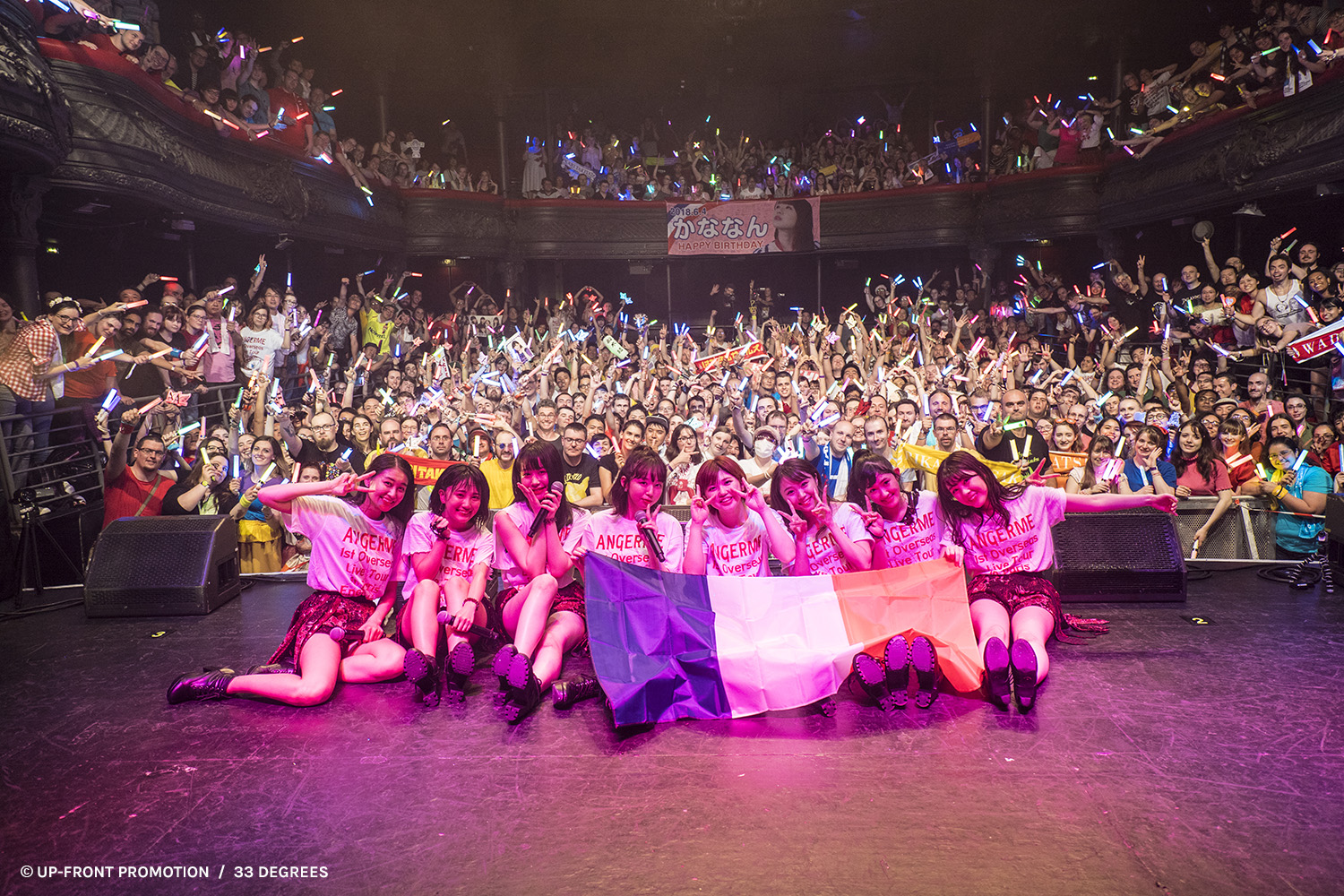 Special thanks to 33 Degrees for letting us publish this live report.

Photos courtesy of Up-Front Promotion and 33 Degrees
Article by Adorian, translated to English by Melody