It was a very strange yet fulfilling day for Iketeru Hearts in this September 8th. The group had blown out their 5th candle the day before, and all their fans gathered in Akabane ReNY alpha on this Sunday to celebrate this milestone in a memorable double-performance live, to say the least!

As part of our Youtube series “One Day With…”, you can also watch a complete video summary (English subtitles available) of this eventful day below:

The first show early in the afternoon looked like a regular idol live, as we were able to watch several groups perform on stage, after a 10-minutes opening set by Iketeru Hearts, and right before twenty more minutes of their songs as a conclusion. Iketeru Hearts were the hosts of the day, inviting groups STELLABEATS, AOP and fellow-Stand Up! Records act Purely Monster to their own party.

But the real show started one rain shower later, despite typhoon Faxai menacing the skies outside the venue!

As the members walked on stage with shiny pompoms on “Sparkle☆Power”, Akabane ReNY alpha demonstrated its full visual potential with a storm of colorful light effects and hypnotizing videos on the giant screen behind the stage. “Otomegokoro” and “Sekai he habatake!” followed, the fans already excited thanks to this first warm-up earlier in the afternoon.

Performing the group’s major debut single “Let’s stand up!” was a given, fans following their idols into lending them their strength by joining their hands together. “ORIGAMI” dipped the venue into a cooler and more serious atmosphere, before two more single tracks, the powerful “Lumica Jane” and the dark and mystical “Zaishyou no Lucifer”.

After pausing for a second talk, leader Nijika introduced the most-anticipated part of the night, that had already been announced prior to the live. Former Iketeru Hearts leader Arata Yuuyu, as well as former Stand Up! Records kenkyuusei now-turned CY8ER member Mashilo showed up on stage, nostalgia hitting their fans like a fresh wave! It had been only a few months since Yuuyu’s last performance with the group, and members and fans immediately greeted her with some warm “Welcome back home!”. But more than four years separated Mashilo from her last appearance with her former groupmates. She was able to take part into Stand Up! Hearts’ trip to France for Japan Expo Paris back in 2015, right before getting transferred to the now-disbanded rock unit DEEP GIRL. Mashilo is now active in EDM idol group CY8ER, and Arata Yuuyu is active on Youtube and operates her own bar in Asakusa.
Iketeru Hearts, along with Yuuyu and Mashilo, then performed two of their oldest covers back from their kenkyuusei days: Afilia Saga East’s “NEXT STAGE!”, and the now-iconic “Triangle Wave”.

The next segment was also the last of the night: the approaching typhoon resulting in train lines stopping their operations earlier than usual, the concert had to be cut off in order to make sure everyone went home safely.
“LOVE♡LOVE♡LOVE” opened, before the catchy anime tie-up single “Rosetta Stone” and the upbeat “MARIA”. “Kibou no Chizu” showed the cooler side of Iketeru Hearts with its chill rap verses, and it is after a short heartfelt speech from Nijika that the electronic sounds of “KAKERA”, the theme song for their latest tour, made the entire venue vibrate. Fans cracked dozens of ultra-bright glowsticks, painting the room orange waving their hands along their idols.

The encore call was replaced by an extended MC before a final song, during which idols and fans had to go through a rollercoaster of diverse emotions. Ochi Karin and Uchida Kotone both took a step forward to announce their graduation from the group. “Iketeru Hearts were my youth,” Ochi declared with a wide and serene smile on her face, after adding that she would also retire from the entertainment business. Uchida stated similar reasons for graduating as former leader Arata Yuuyu. “In the current state of things, I feel like I behave like a spoiled child as a member of Iketeru Hearts, and I need to step out of this comfort zone to grow and be able to become an adult,” she said, tears in her eyes. Ochi Karin and Uchida Kotone will graduate from Iketeru Hearts in a last one-man live on January 11th 2020 at Shinjuku Blaze, their biggest venue to date for a solo performance.
Both of them will also participate into a last single, and Iketeru Hearts’ 8th major release, “Never stop love”, out on November 27th! 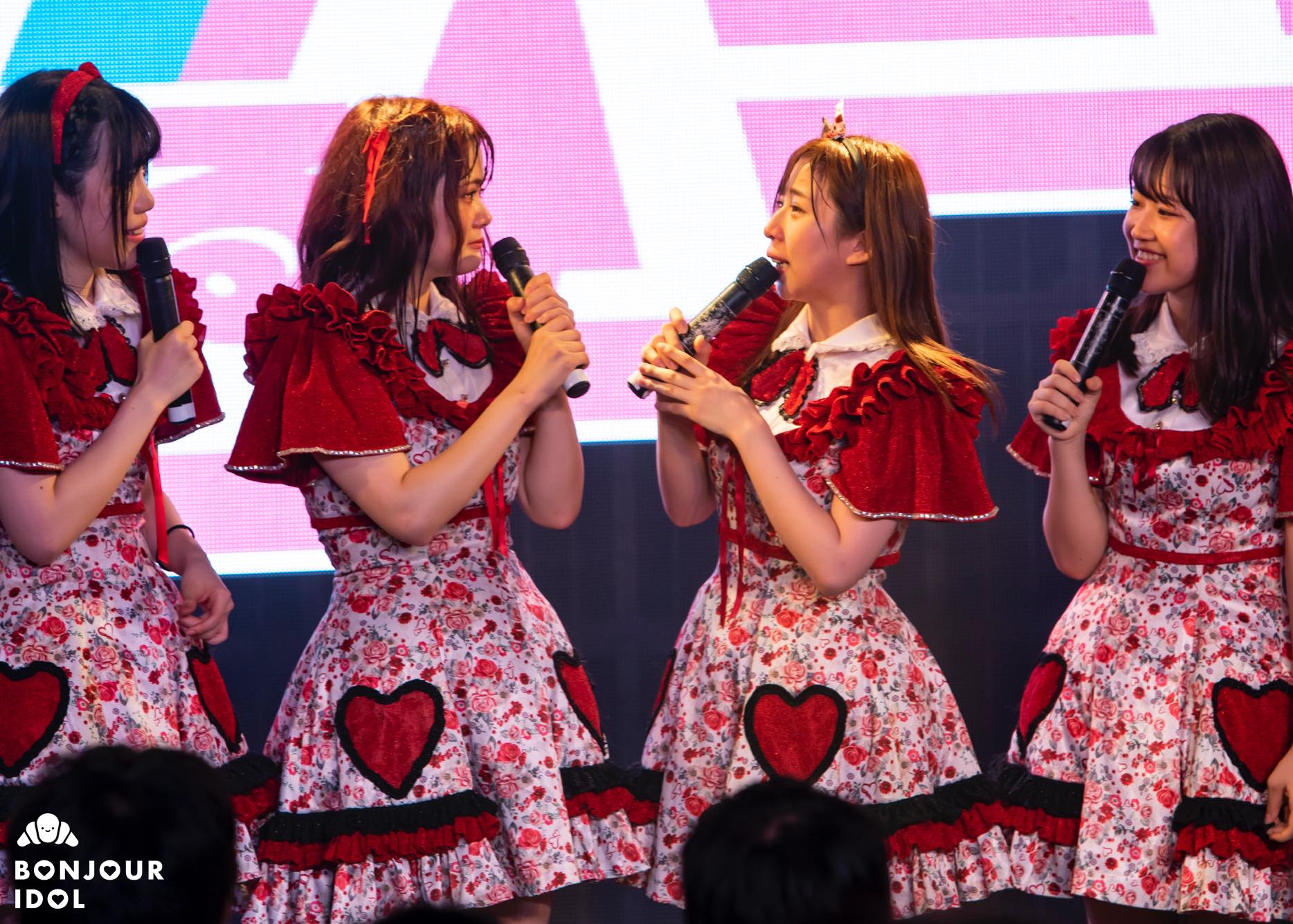 The night ended quicker than planned as the skies got darker, with the optimistic but appropriate “Believe In My Dreams”, as we could see fellow first generation member Usami Madoka break down into tears while singing.
Despite the sad departures, Iketeru Hearts stills walks proud, standing up as the group evolves along with its members’ personal growth. As Nijika stated in her speech, it is because their fans are giving them such support that they will always be moving forward and will keep dancing as a sign of their eternal gratitude! 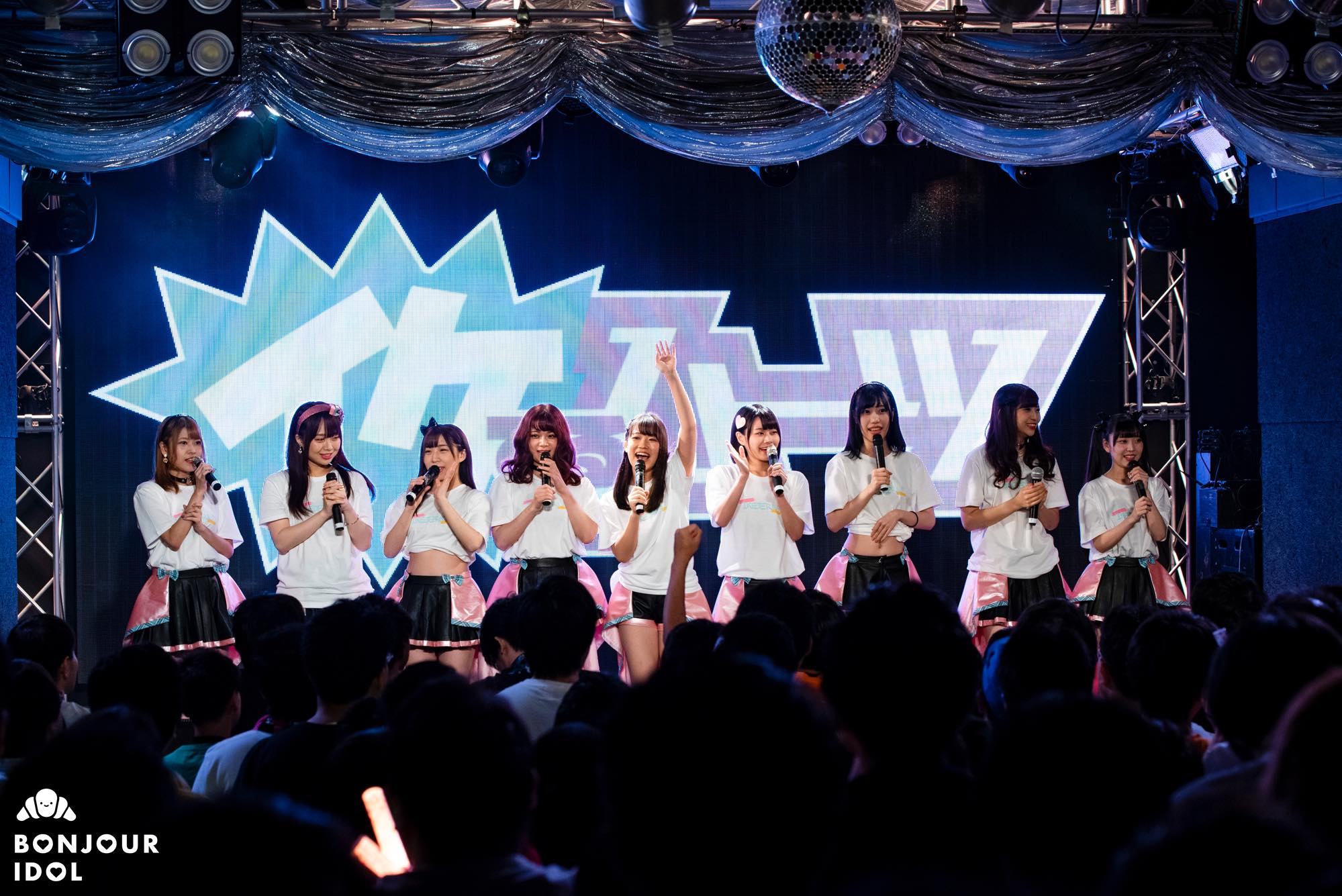 Photos by Kai.
Article and translation by Melody.