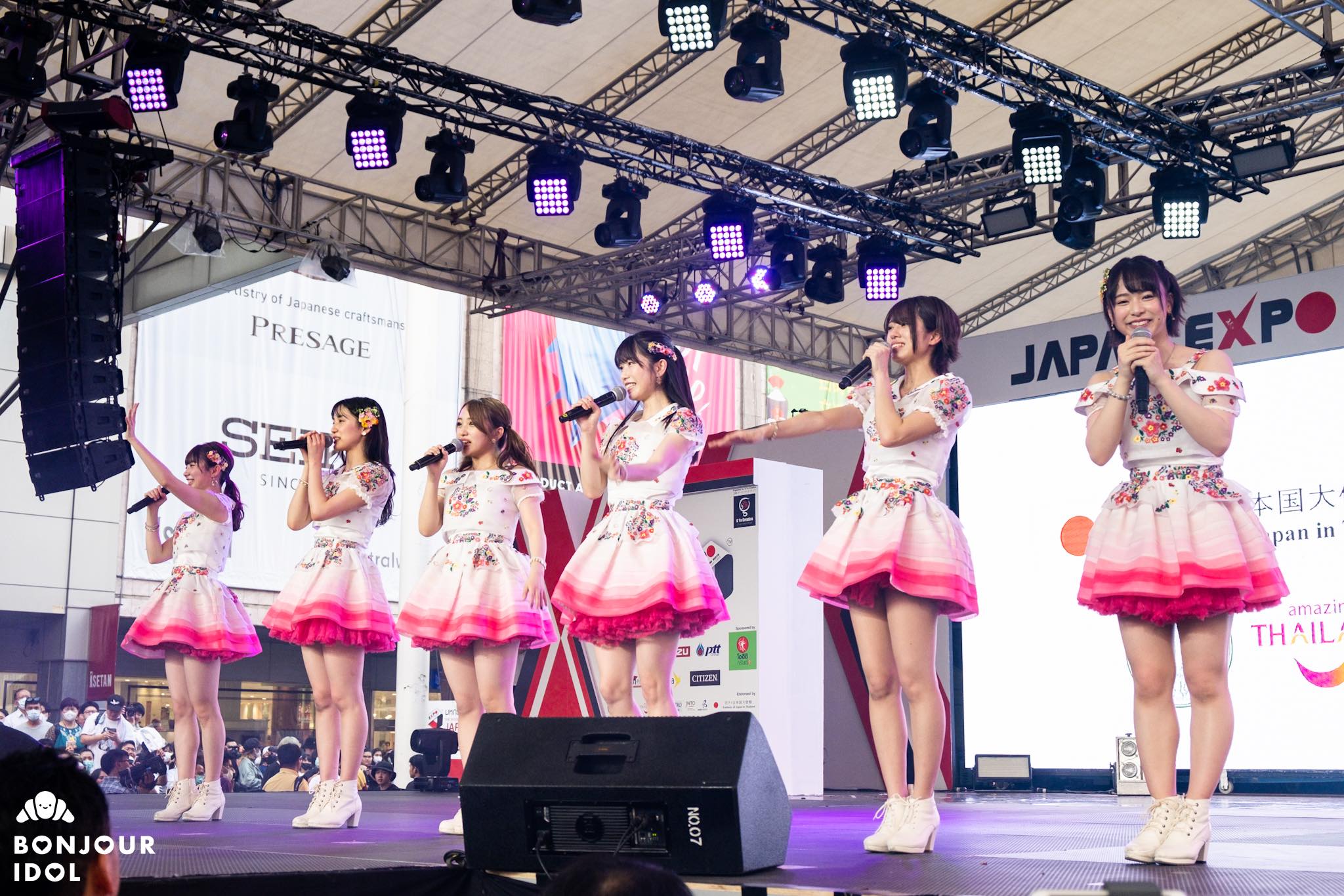 The concert started with the traditional AKB48 overture, giving way to an ocean of colourful glowsticks and fans (uchiwa) for the members. The 6 girls then arrived in beautiful white and pink dresses, starting with “Aitakatta”, one of their most famous songs, which immediately launched the festivities. It was followed by “Kibouteki Refrain” and “#Suki Nanda” before the first MC for the members’ introductions.

A good idol MC cannot happen without a food talk, during which Yui tells the audience that she had tasted tom yam khung, a spicy Thai specialty with shrimps. Each girl then introduced herself one by one, with a surprise for Mion! She turned 22 on January 29th and all the fans took the opportunity to wish her a happy birthday again by raising plenty of signs and messages above their heads. Yui also got caught by surprise with a giant sign with her name on it. “It’s the first time I’ve seen such a big sign with my name on it!”, she said excitedly. Congratulations to the fans! The exchange continued with the following theme… Thai food of course! What specialties did the members taste? What are the recommendations of the audience?

The live went on with 2 tracks, sung by 2 trios: “Heart Gata Virus” with Yui, Mion and Tomu, all 3 using cute tambourines matching their outfits. Then came Team 8’s “47 No Suteki Na Machi e” sung by its representatives, Narumi, Miu and Momoka, where the fans showed once again that they know perfectly the songs and the calls.

During the second MC that follows these two songs, goodies signed by the 6 AKB48 members were given on stage to 6 lucky fans, handed over in person by the members themselves! A gift and a unique experience that may have made many envious. Congratulations to the winners! It is certain that each of these 6 fans will cherish their present forever!

They then gave way to the president and the vice-president of G-YU Creative, one of the Thai companies in charge of events promoting Japanese culture in Thailand, including this Japan Expo exhibition. For the occasion, each AKB48 member was given a gift: traditional Thai trousers. These baggy cotton pants are extremely comfortable and decorated with beautiful patterns. Momoka couldn’t help but jump everywhere from joy: it’s exactly what she wanted to buy in Thailand!

The concert could then start again with “Iiwake Maybe”, another popular song very appreciated by the fans, then “Kimi wa Melody” where 6 microphones on stands are brought on stage, also to prepare the next one: “Heavy Rotation”. At least that’s what was planned; the members got into place and Mion announced the title, but “365-nichi no kamihikouki” came up instead! No problem, the girls were able to perfectly adapt their formation and sing the song, when the first notes of Heavy Rotation suddenly rang as soon as the previous music was finished… without leaving time for the girls to prepare! Idols and fans shared a great laugh as everyone ran and bumped into each other to get their microphone stands and follow the choreography. That’s what makes the charm of a live show, as Yui wisely said!

The show ended with “Koisuru Fortune Cookie” where the 6 members moved to the front of the stage to enjoy one last time the warm Thai atmosphere dancing with the audience. That concluded the performance of the world’s most famous Japanese idol band with their most impressive CD sales records. A band that has officially existed since 2005 and still remains active and popular 15 years later! 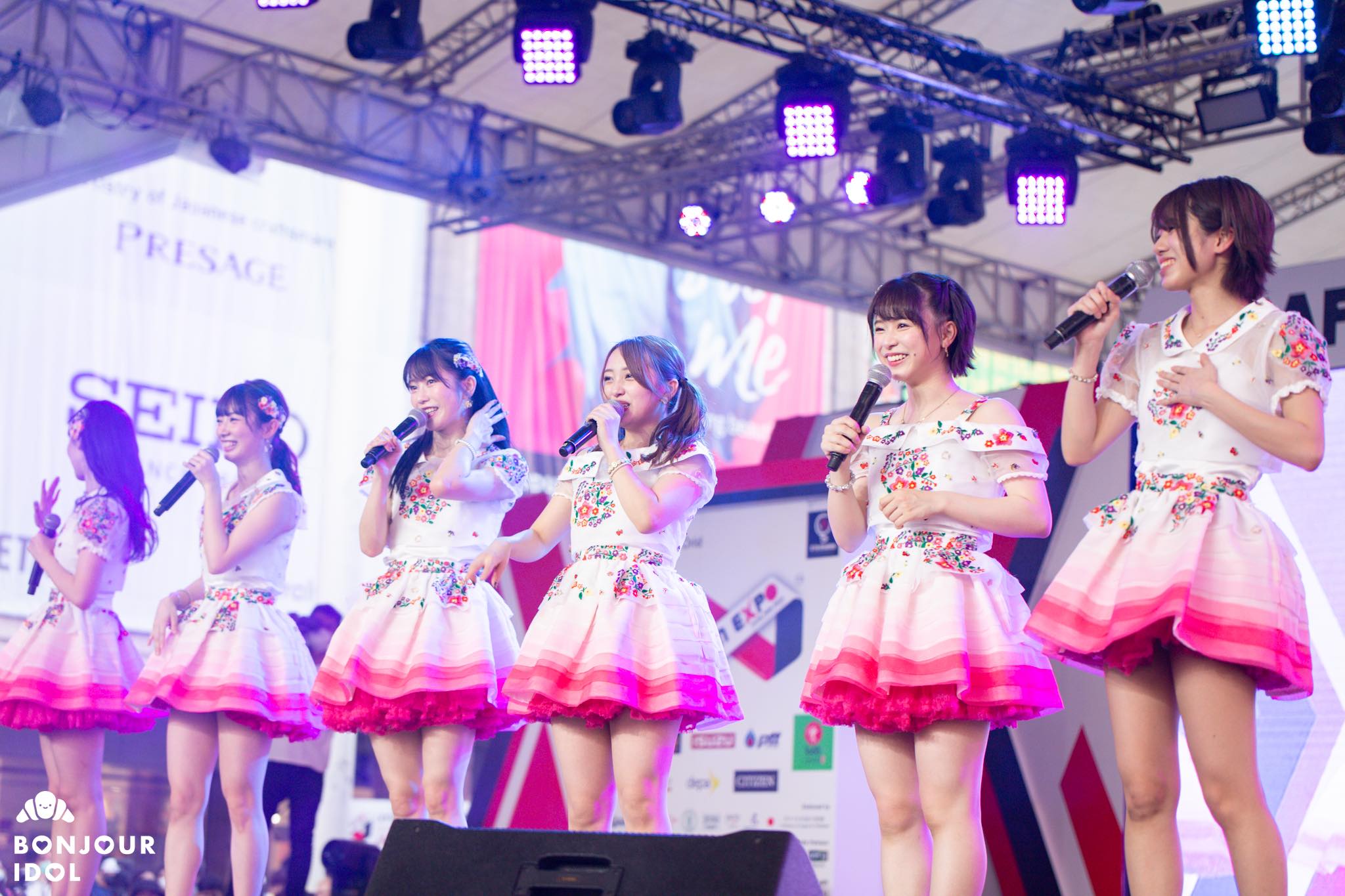