Iketeru Hearts fans gathered on December 21st, 2018 for the very last concert for two members of the group, Arata Yuuyu and Manami Kazune.
The concert was held at Shibuya WWW X, a meaningful place for the group as it was the same venue where their first one-man live was held a couple of years ago. 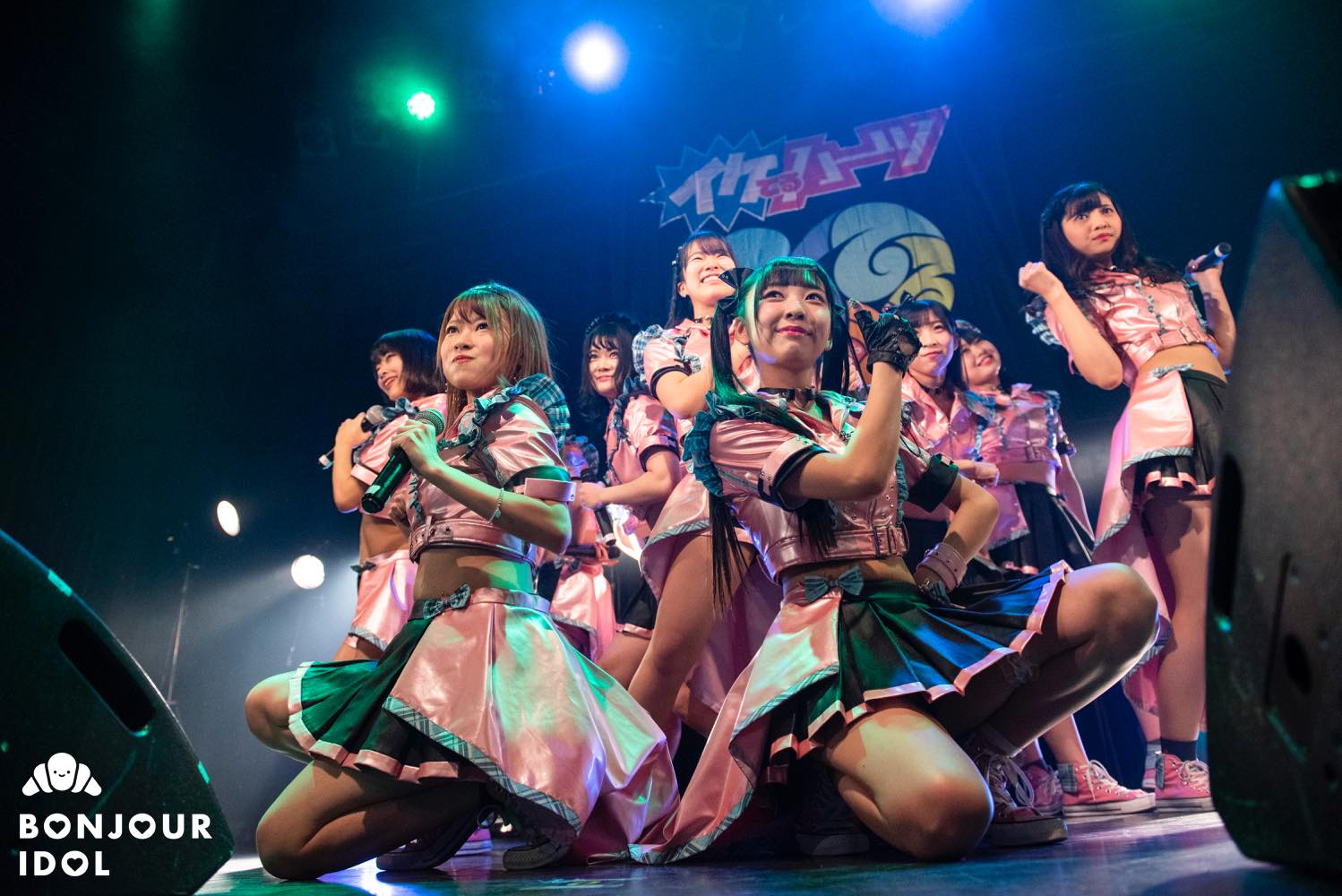 “Karma Stripe” and “Shishin Kakutei” started the celebration, and a short MC introduction followed right after.
The concert was already on the way when the 11 members gathered for the last time on stage to perform a special song medley. “Let’s stand up!”, “GIRL.Me”, “Otomegokoro” and “Shrimp Girl”, Iketeru Hearts’ own songs, followed one after the other in a dynamic and joyful atmosphere. A slight touch of nostalgia hit the venue as everyone could recall the youthful Stand Up! Hearts era (trainee group in which Yuuyu and Manami debuted as idols, as well as all the rest of Iketeru Hearts’ first generation) with momo-i’s “Opera Fantasia” and Velforest‘s “Soukoku no Spica”.

In fact, the truly nostalgic part of the concert began after a MC, bringing up the group’s dearest memories, when the speakers started blasting a medley of songs that had not been performed in a while. The audience could enjoy “Happiness!” (Murata Ayumi), “May I Help You?” (Opening from the anime “Servant x Service”) and “Sorairo Days” from Shoko Nakagawa.

As faces began to tense up because of coming end, it went on with “Dreaming Love” and “Rosetta Stone”, followed by “Tenbu no Mai, Akatsuki no Mon” (KAORI) and “Triangle Wave” (Murata Ayumi). These songs reminded us Bonjour Idol members early memories all the way back from Japan Expo 2015, where we met the group for the first time. “Sekai e Habatake” took over and confirmed its rank among the most iconic songs of the group, all 11 girls conquering the world flying with their angel wings. “Zaishyou no Lucifer”, “Kibou no Chizu” and “LOVE♡LOVE♡LOVE” concluded the main part of the concert!

After an energetic ENCORE call, Arata Yuuyu and Manami Kazune came back on stage wearing gorgeous dresses. We had already seen Yuuyu‘s as she wore it at her birthday live a few days before, but Manamii‘s was still unknown. A very beautiful white dress, which was also her official color, made her shine brightly. Joined by the other members, wearing the official t-shirt of the concert, the group revealed one of the songs of their next single (“Sparkle ☆ Power”, release scheduled on February 27th, 2019) “MARIA” for a unique and outstanding performance, including Yuuyu and Manami in the line-up. In a last MC, the two stars of the evening took the opportunity to express their feelings after so many years in the group that made them what they are today.

Kazune Manami mentioned how satisfied she has been at being able to be part of this adventure. She expressed her gratitude for being able to meet all their Japanese fans, but also people all around the world. She will do her best to find her way in a new life which has already started.
Arata Yuuyu stated how much joy it brought her to have realized her dream to become a Japanese idol, a wish she had had for a very long time. During all these years, she felt happy to see the smile and the support of her fans, has had a lot of fun in each and every concert with her fellow members, and feels proud to have built the wonderful group that Iketeru Hearts is today. From now on, she will pursue her dreams and reassured her fans: they will be able to see her again, whether on Youtube or during her future activities!

These two speeches tore a few tears to the members, especially to Nijika and Kotone, the current leader and sub-leader of the group. Nijika, in a trembling voice, promised that she would do her best to continue the work of her predecessor. Then, the ballad “I will” resonated in the venue in an emotional moment, much like a last glow for the two stars. “Happy End” and “Lumica Jane” finished this evening in joy, and the smiles of the members had made the tears of their fans evaporate in happiness. All of them will keep a happy memory of this last concert with Yuuyu and Manamii as members of Iketeru Hearts.