Since a few months now, the Bonjour Idol team had been wondering how to celebrate Christmas with you, frequent readers or new visitors of our website. We thought that the best thing to do would be to write a report and gift you pictures of a Christmas concert of a certain group.
We had the great honor to be invited for both of =LOVE‘s Christmas concerts (idol group produced by Sashihara Rino), and this is our present to you! Find below a photo report of both concerts! 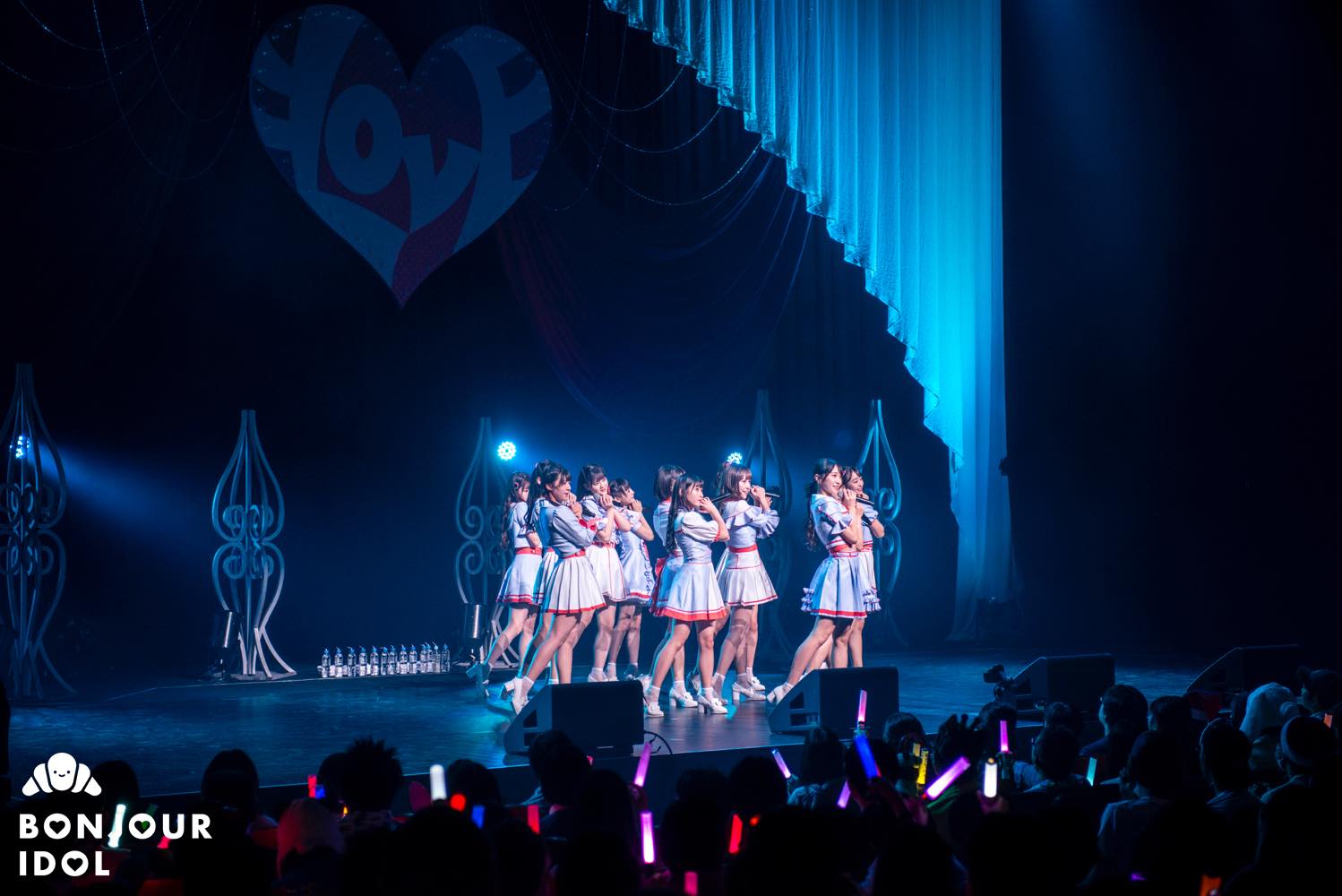 Fans were present at the Galaxy Theater on the island of Tennozu, Tokyo Bay for the first =LOVE Christmas performance, held at 1pm this Friday, December 23th.

When the lights went out, an ocean of multicolored glowsticks illuminated the 750-seats theater. Despite being unable to stand up during the performance, as soon as the members appeared on stage, the atmosphere didn’t take long to skyrocket in the audience. The much-awaited Christmas song of the group “Bokura no Seifuku Christmas” opened the concert! The members, wearing the outfits from their latest single “Want you! Want You!” with their scarves, symbols of this song, bewitched the audience in a true Holiday atmosphere: friendly and festive. We once again enjoyed the beautiful voices of Noguchi Iori and Morohashi Sana during their respective solo lines.

After a brief introduction, “Start!” and “Bukatsuchuu Ni Me Ga Au Natte Omottetanda” followed up. We could still feel the hype until the whole room dove in a bright red ocean to accommodate the group’s most powerful song, “Teokure caution”.
The song, that totally conquered Japan Expo‘s audience during their concerts in France, still made a lot of impact thanks to the power the members provided for the performance, both on a dance and a vocal level..

It was then time to let the new songs shine! “Ima, Kono Fune ni Nore” and “Want you! Want You!” took the audience on a cruise around the globe in a happy atmosphere before giving way to the photoshoot corner. You may have noticed this already, but =LOVE is one of the few groups that allows fans to take pictures during their concerts. This time, fans had a timeframe of ten minutes during which members stroke a pose at different spots on stage.

Speaking about Christmas, it is also about the gifts we give to our loved ones. That is what the 12 members of the group wanted to show off with a lottery raffle! The winners won random gifts among several goodies signed by the girls. Alternating between two groups of six during this little break, members changed outfits and came back dressed in promotional outfits for their second single “Bokura no Seifuku Christmas”, a pure white uniform with some pastel blue and pink details.
A new fight stormed the stage with “Kiara, Tasuke ni Kita zo” before “=LOVE”, the iconic song of the same name, ended the first part of the show.

An encore took place in high spirits, and the twelve girls showed up on stage wearing beautiful white coats, specifically made for these two concerts. The front side of the coats were decorated with adorable burgundy red velvet ribbons, and Saitou Nagisa started the next song, “Todoite LOVE YOU♡”, melting the fans away with her multiple winks.
It was time for the last talk, in which Nagisa didn’t hesitate to thank the staff who had designed these coats -that unfortunately will probably never be worn again after this concert- and asked if they could take a picture with the audience, who couldn’t refuse.
Then, “Bokura no Seifuku Christmas” resonated in the venue, the members adding their colorful scarves on top of their pretty coats. This completed this first performance of the day. 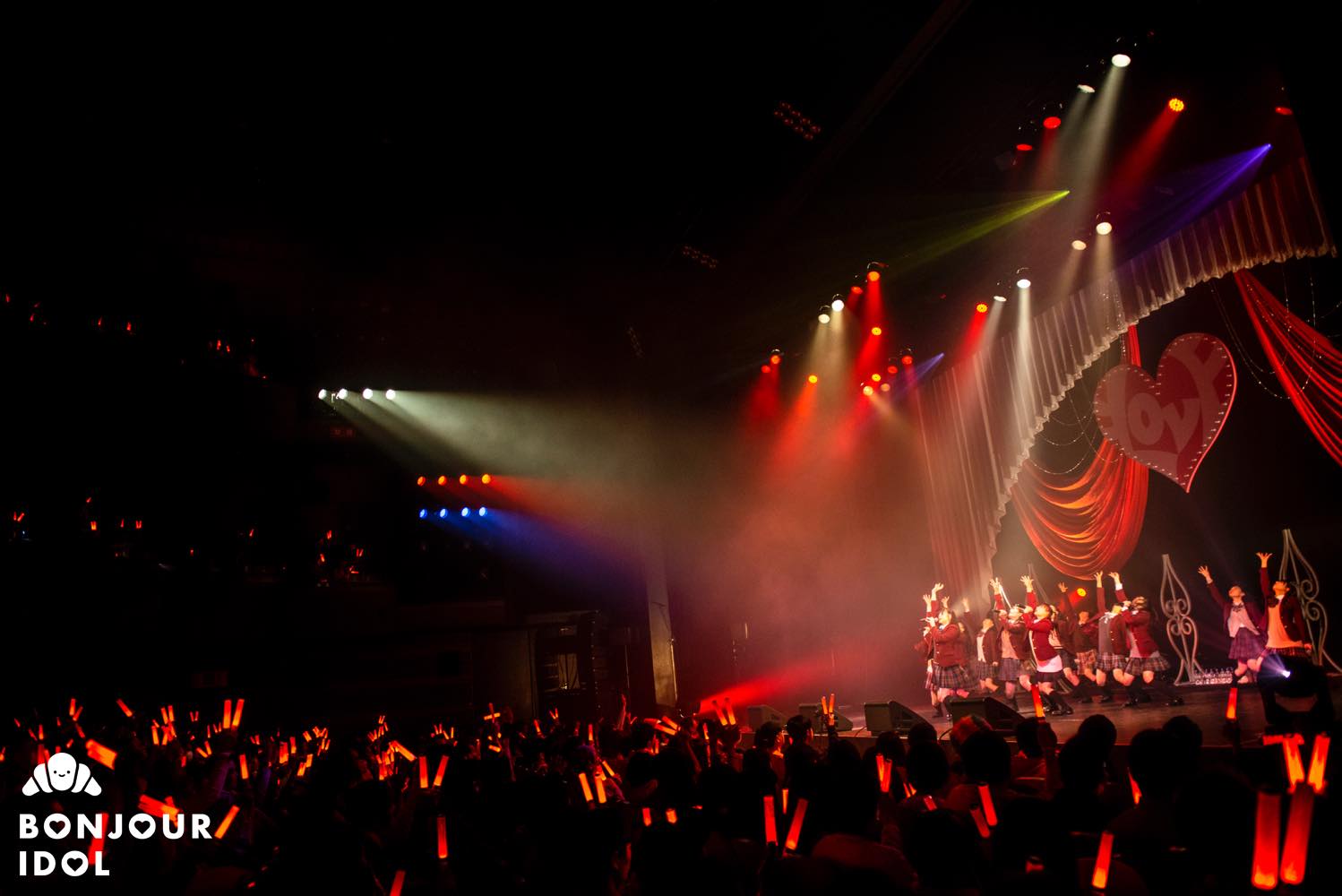 The evening performance started at 5pm and was based on the same format as the first performance, aside of some changes in the setlist. However, there was one new thing; the concert was broadcast live worldwide on the group’s YouTube channel! You could watch it and enjoy the energy of the group for a good hour and a half! Thus, we could hear the remaining titles of the group’s discography. We once again noticed the vocal ability and power from the members on “Aikatsu Happy End”, while the second part of the concert (after the photo segment and the lottery raffle) made way for the outfits from their second single “Bokura no Seifuku Christmas”. Not to repeat ourselves, but how not to say a few words again about how the song “= LOVE”, undoubtedly the keystone of the strong friendship between the members, contributing greatly to the incredible rise of the group over the past months.
After the ENCORE call, the one song that brings you into =LOVE’s world, “Youkoso! Ikorabu Numa”, resonated in the hall, and the concert ended on “Bokura no Seifuku Christmas”, all members still wrapped in their big white coats.
Note that these were also the first concerts in which the group performed with twelve members, after the comeback of Sasaki Maika just a few days earlier, making them as important for fans as for the members.

In both performances, all 12 titles included in the discography of the group were performed by the 12 members of =LOVE. The next meeting with fans is now set for January 1st, 2019 in order to celebrate the new year under the sign of the Pig with their favorite idols. Let’s not forget that on February 16th, 2019, the group will perform its first solo concert at the Showa Women’s University Hitomi Memorial Hall.

In the meantime, we hope that you have had a wonderful Christmas holiday with your loved ones, and the entire BONJOUR IDOL team wish you a Happy New Year 2019 (a few days early!).