It was on October 20th that we met with idol group Lily of the Valley! Following up two one-man live in their hometown in Osaka and one in Nagoya, the 5-members group wrapped up this tour in Tokyo at TOKYO FM HALL.
Rising stars of the Japanese indie idol scene and after only one year of activities, the spring breeze-like group travels through seasons and provides energetic pumped up performances at every single one of their lives.

The concert started with one of the group’s iconic songs “Suzu no Oto”, followed by two rock-ish tracks: “Koufu Gohan”, during which the girls threw candy at the audience, and “Jibun no Kotae”. 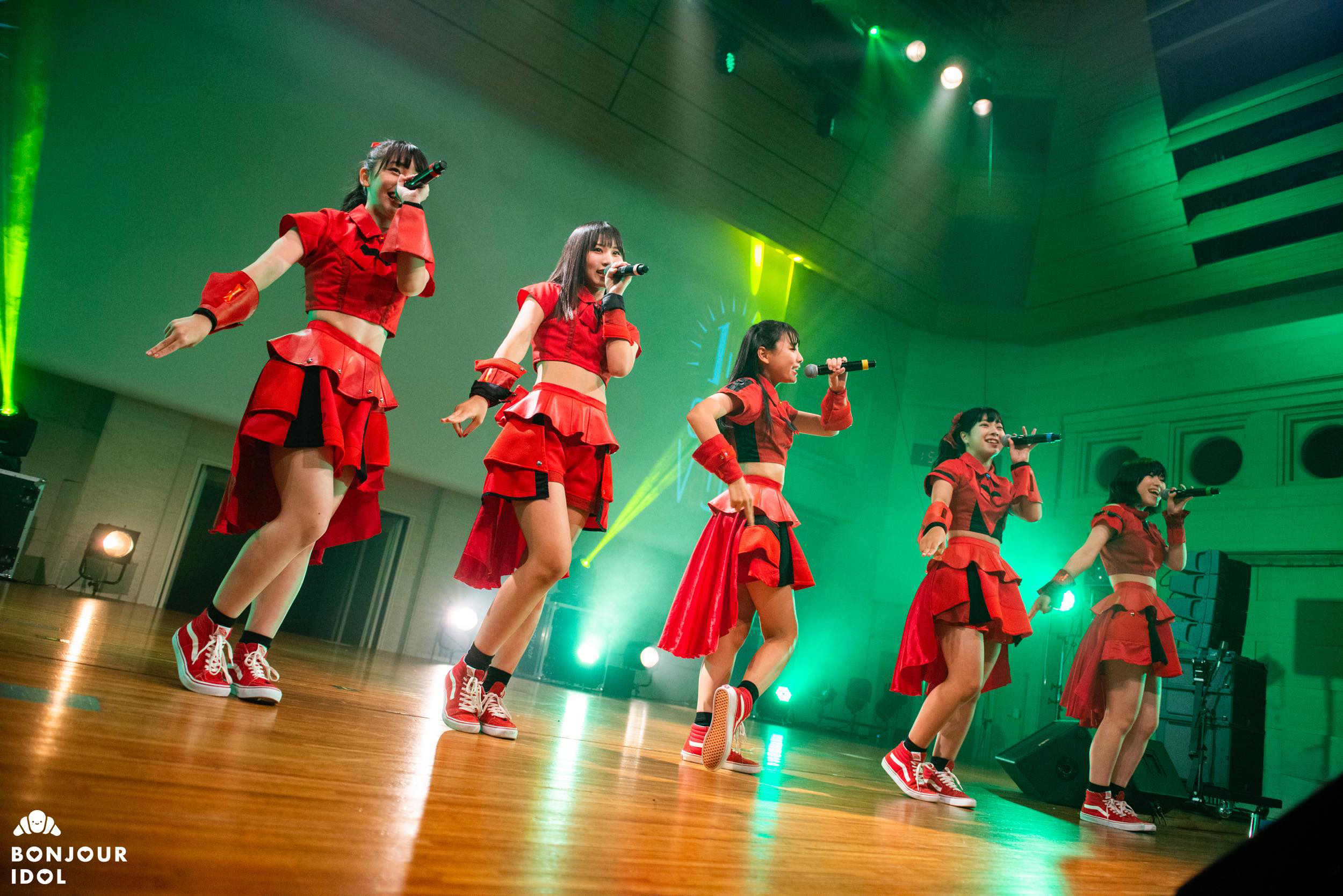 After a fired-up first part, the members took a break for a first MC, in which Miyamaru Kurumi pointed out that one year had passed between their first performance on October 14th, 2018 and the present day. The members took this opportunity to talk about their best memories from this first year. Natsume Saria talked about how happy she was to be able to stand on the stages of Tokyo Idol Festival 2019 and to be able to talk to the members of =LOVE, as she is a big fan of them. As for Kurumi and Sawamura Risa, they mentioned that they were so happy to always be on the road for idol activities to sing their original songs. As for Onodera Misa, she expressed her gratitude about getting to stand on the main stage of idol festival @JAM, along with former Babyraids JAPAN’s Takami Nao. Nishimura Tsukino made the audience laugh when she mostly talked about her trips to Disneyland, in a hilarious contrast with her senior members’ serious answers.

The lights went out again and Risa found herself under the spotlight to sing the opening lines of “Orange” acapella. Echoing with Misa‘s memory from the previous talk, @JAM’s theme song “Yume no Suna ~a theme of @JAM~” followed up. “Ima yori Motto” and “only one” wrapped up this second part with quiter and relaxing vibes. The latter saw the entire venue go pitch black, only to be lit up by the members’ colorful glowsticks while dancing on stage, and those of their fans.

Just like for the previous conversation, Kurumi asked a new question to her groupmates. She asked them to talk about what they would like to accomplish during this second year of activity. Kurumi started the conversation by stating that she was interested in writing song lyrics. Misa, Saria and Risa all took new good resolutions, before the serious tone of the talk got disrupted once again! Tsukino, charmingly stuck in her own little world, made everyone laugh again when she mentioned wanting to become a Disney star. A special video about the group’s first year was shown on the big screen, and the concert’s third and last part could begin after a cheerful MC.

It was a non-stop six songs-long segment that pleased the fans for this last part of this concert! The playful rhythms of “GIRL TALK!!” and “Hello Yume wo” first filled up the room. The group’s most popular song, “Serious na Kami”, got everyone dancing along with a frantic energy. “Yell no Kotoba” and “Film” followed with pop-rock tones, echoed by the fans’ excited calls! The latter saw Kurumi pulling out one of her usual film cameras, snapping shots of new unforgettable memories on this new stage. The electronic yet traditional Japanese-like notes of “Yozora ni Saita Hana”, along with a choreography using folding fans, concluded the concert’s main part. The song got interrupted halfway through to announce the group’s 4th one-man live for May 2nd, 2020, at Kanda Myojin Hall!

Each member made a short speech to express their gratitude towards their fans for this beautiful first year. They also stated being ready and very enthusiastic for their future. The lights went out, giving way to a short ENCORE started by the crowd. As a conclusion, “Suzu no Oto” resonated again, much to the audience’s delight. 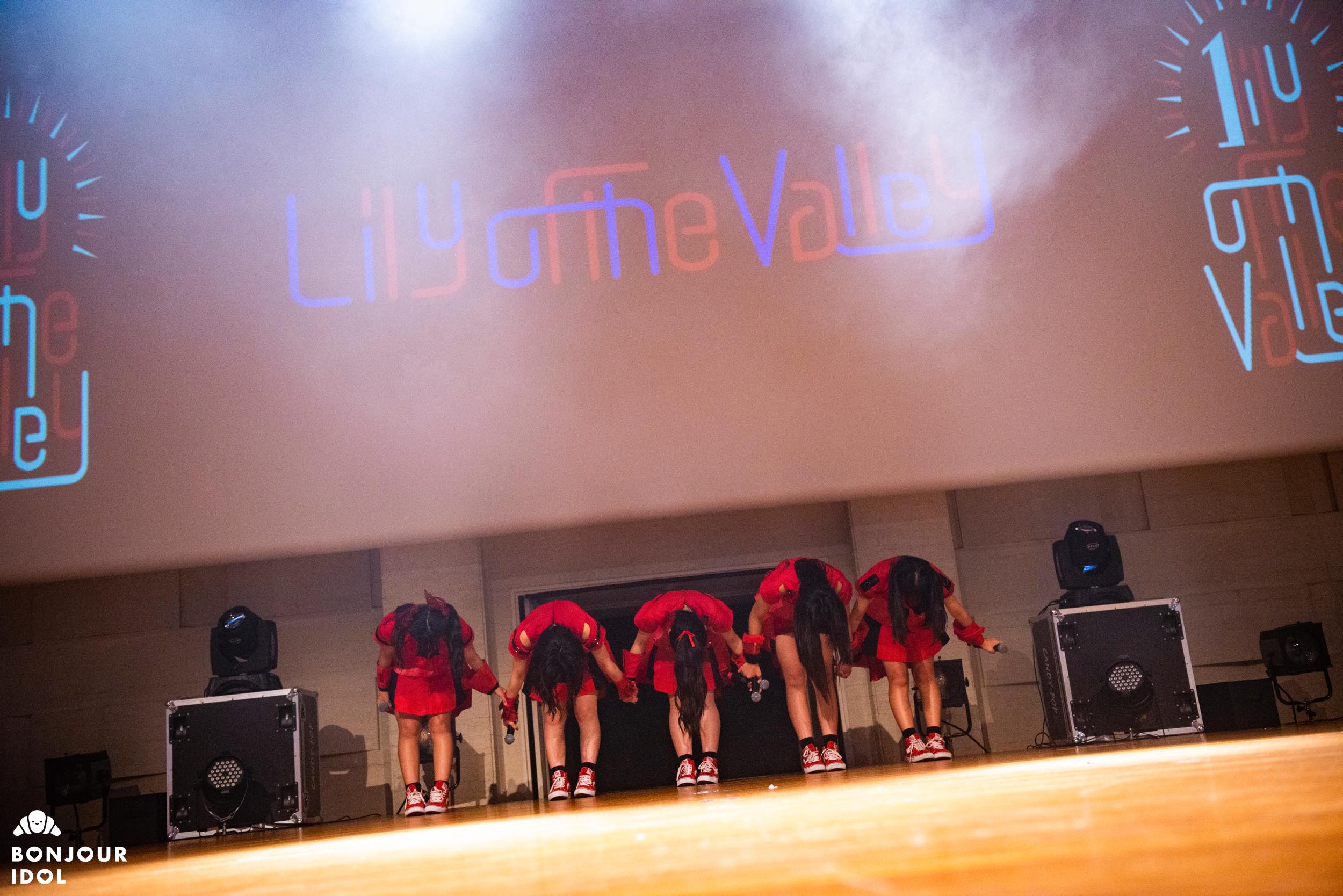 The small Osaka-born group has already come a long way since their debut back in October 2018. Despite their young age, these five girls form a strong and united group, and never fail to impress with performances filled with positive energy! Kurumi, Saria, Risa, Misa and Tsukino have a bright future ahead and we will closely follow this promising unit on the rise.

Lily of the Valley
This site uses cookies in order to offer a better browsing experience: Find out more