BURST GIRL kicked off a new chapter in their story with the debut of new members Anku and Roa at Shinjuku MARZ on September 22, 2019! Less than a week after bidding an emotional farewell to founding member Rei at Meguro Rock Maykan, BURST GIRL proved that they are not only still a force to be reckoned with, but are growing stronger! 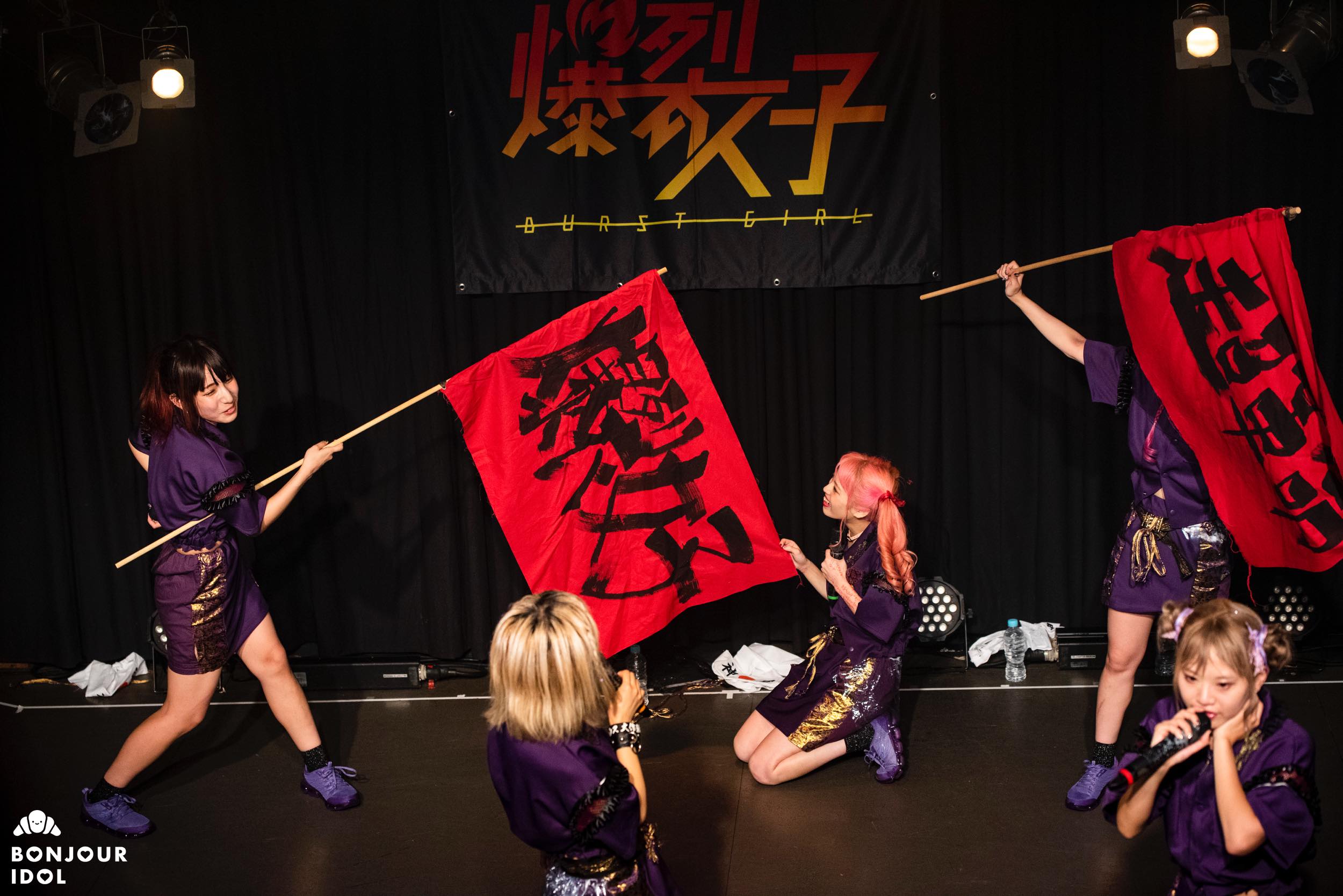 Sirens blared and lights flashed as Yurapiko, Rin, and Miyako brandished their bullhorns, flanked by Anku and Roa waving flags with the words “BURST GIRL” (Bakuretsu Joshi) and “Revolution” (kakumei) written across them in bold brush strokes. The performance blasted off with “Cho Kakumei” followed in quick succession by “Battle” and “Cell Number 8”. As the crowd continued to heat up, Yurapiko attempted to cool them off, spraying them with water from her mouth during “Kamikaze Road”. 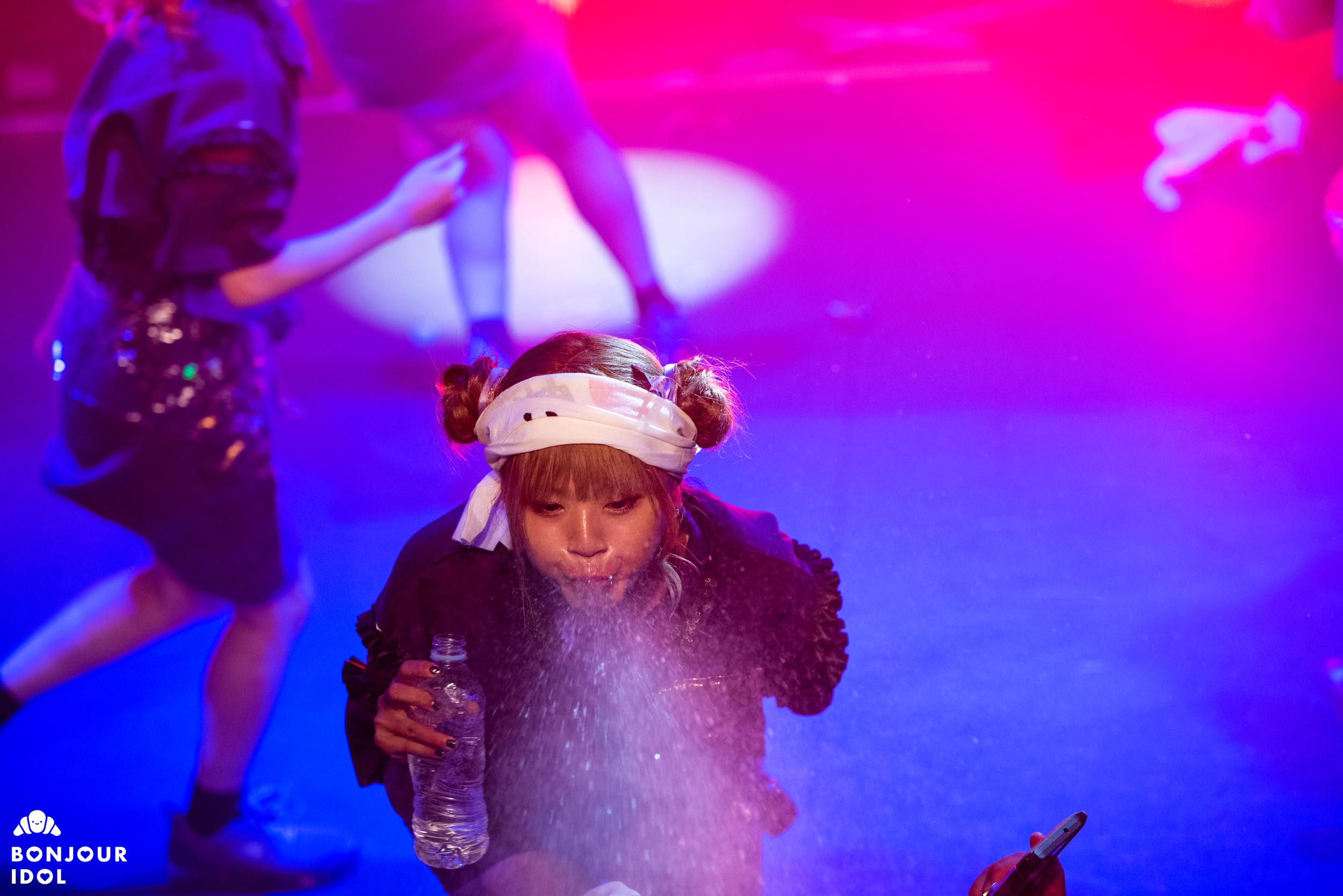 After a quick pause to greet their fans, BURST GIRL proceeded to rip through the punchy poppy punk sounds of “All lie” and the fan-waving festivities of “Sentimental☆Yande Night” on their way to unleashing the dark melodies of “Shodo”. With the temperatures inside Shinjuku Marz rising feverishly, the opening cowbell clacks of “Liar” cracked the air, prefacing the fist-pumping frenzy to follow.

The crowd swelled and surged towards the stage as the performance roared on with “Gishiki”, the fans banging their heads in sync with the members of BURST GIRL. The relentless waves of sound continued crashing and churning with the jagged guitars and sharp vocal stabs of “DISTORTION”. Not even the furious towel whirling of “BURST GIRL” could quell the waves of humid heat rising from the floor. Finishing up in a flurry of flying fingers and swinging arms, BURST GIRL brought the afternoon to a close with the sentimental punk ballad stylings of “Nancy”. 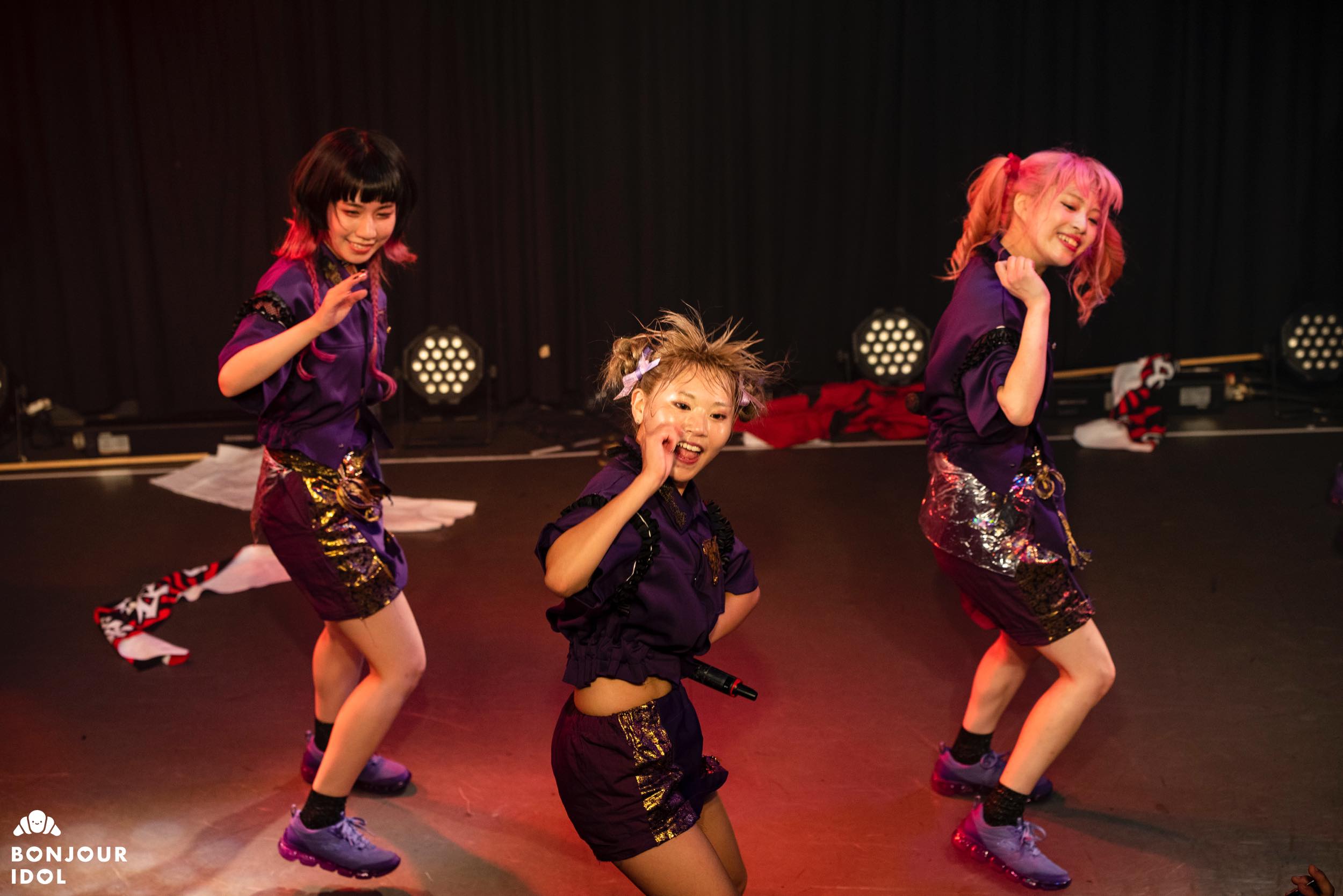 The encore calls began as soon as BURST GIRL left the stage, stopping only when a video announcing the that the new single “Cho Kakumei” would be released on November 20, 2019 began playing. As the fans cheered the good news, BURST GIRL rushed back onto the stage for “GREAT FXXKING MY WORLD”, with Yurapiko, Rin, Miyako, and Roa climbing onto the shoulders of fans and riding through the crowd as they roared through the song. The members of BURST GIRL also announced that they would be returning to Shinjuku MARZ for another one-man live on January 7, 2020, sending a wave of cheers running through the crowd. 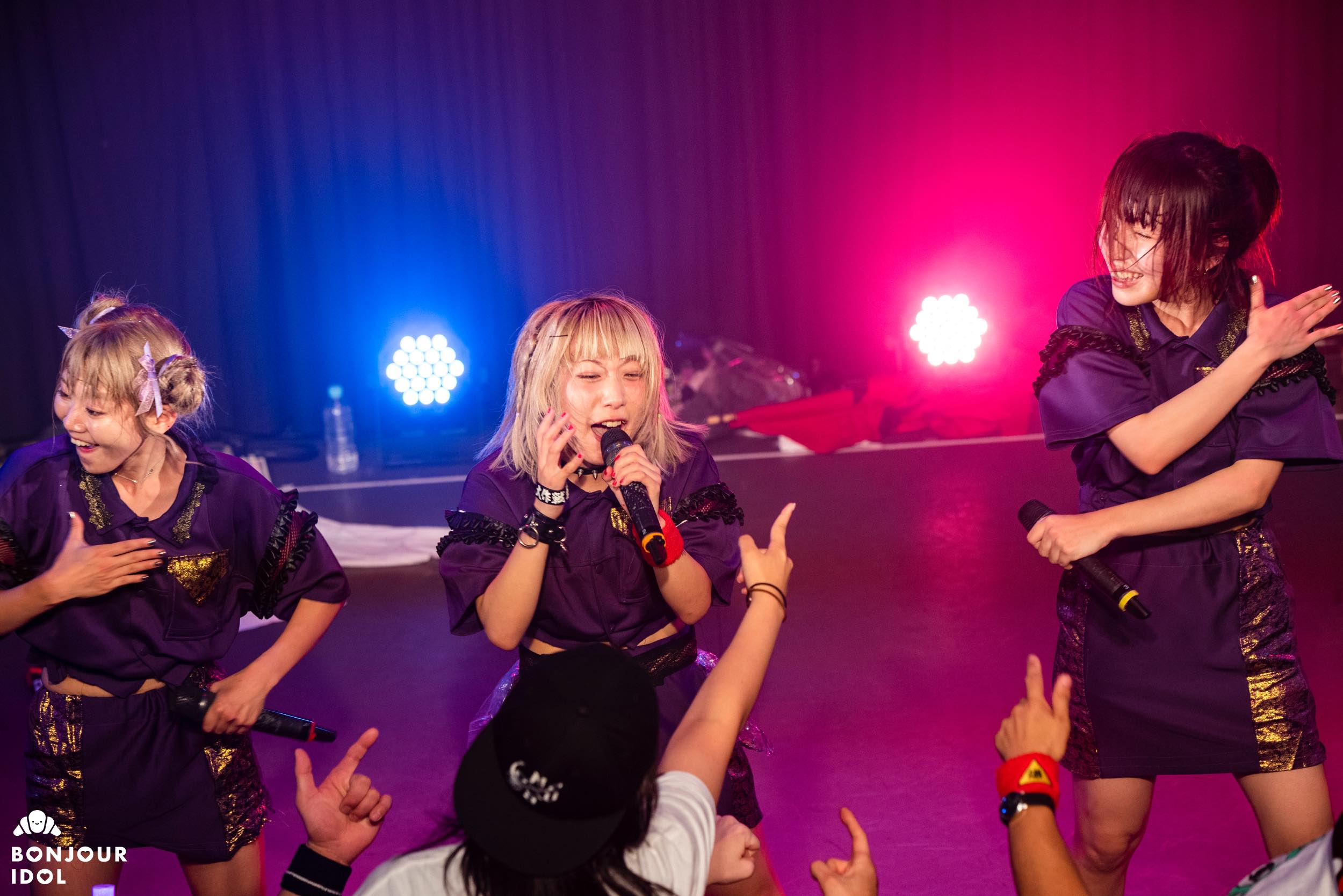 A second encore began with “Cho Kakumei”, BURST GIRL displaying a promising spark of potential in just their first performance together and hinting at the growth to come as they continue blazing their way through the underground scene.

While it is never easy to part ways with an original group member, especially one with such a presence as Rei, based on the performance of new members Roa and Anku at Shinjuku Marz and the rapid growth displayed by BURST GIRL in the days that followed, the group is poised for a super revolution that must be witnessed in person to truly appreciate. 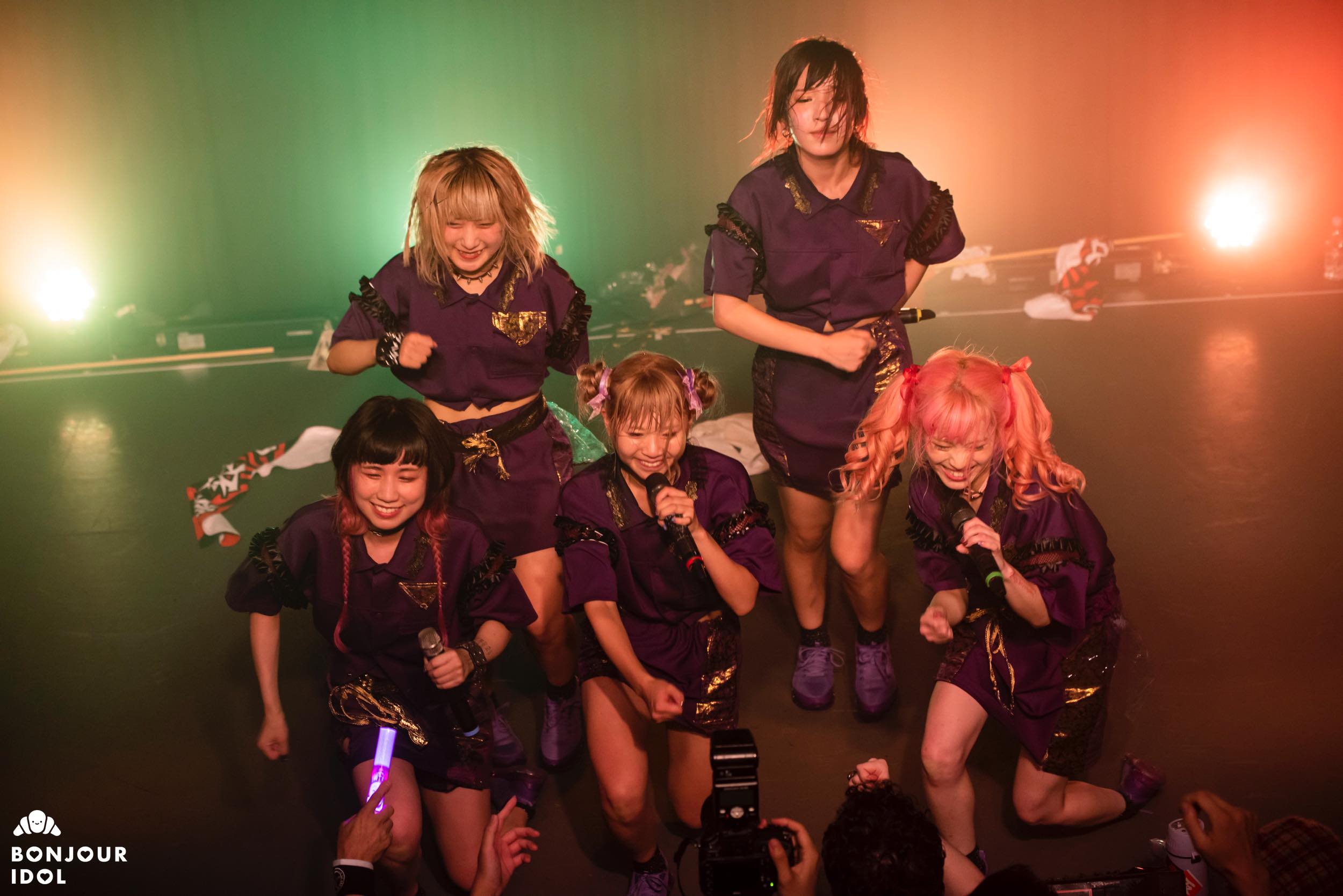 Photos by Kai
Article by Kai, translated to French by Melody