We turned into “Bonjour Not Idol” for a few hours on April 20 at Akasaka MyNavi Blitz as we attended the final performance to BILLIE IDLE®‘s “Soshite, mata…” national tour! Co-produced by NIGO® and Watanabe Junnosuke (WACK), the group is made of three former BiS members and puts out tracks directly inspired from pop and rock music from the 1980’s.

The show opens on comedian Analog Taro, dressed in a white tuxedo. Analog Taro is well-known online for his impersonation taken straight out of 1980’s Japanese television culture, and we hop onto a nostalgic journey inspired by musical TV program The Best Ten to start the concert. Announcing a few classic songs from back in the days, along with some jokes disguised as trivia about the artists, his ranking ends on the introduction of “Soshite, mata…”, before leaving the stage to the five members of BILLIE IDLE®. 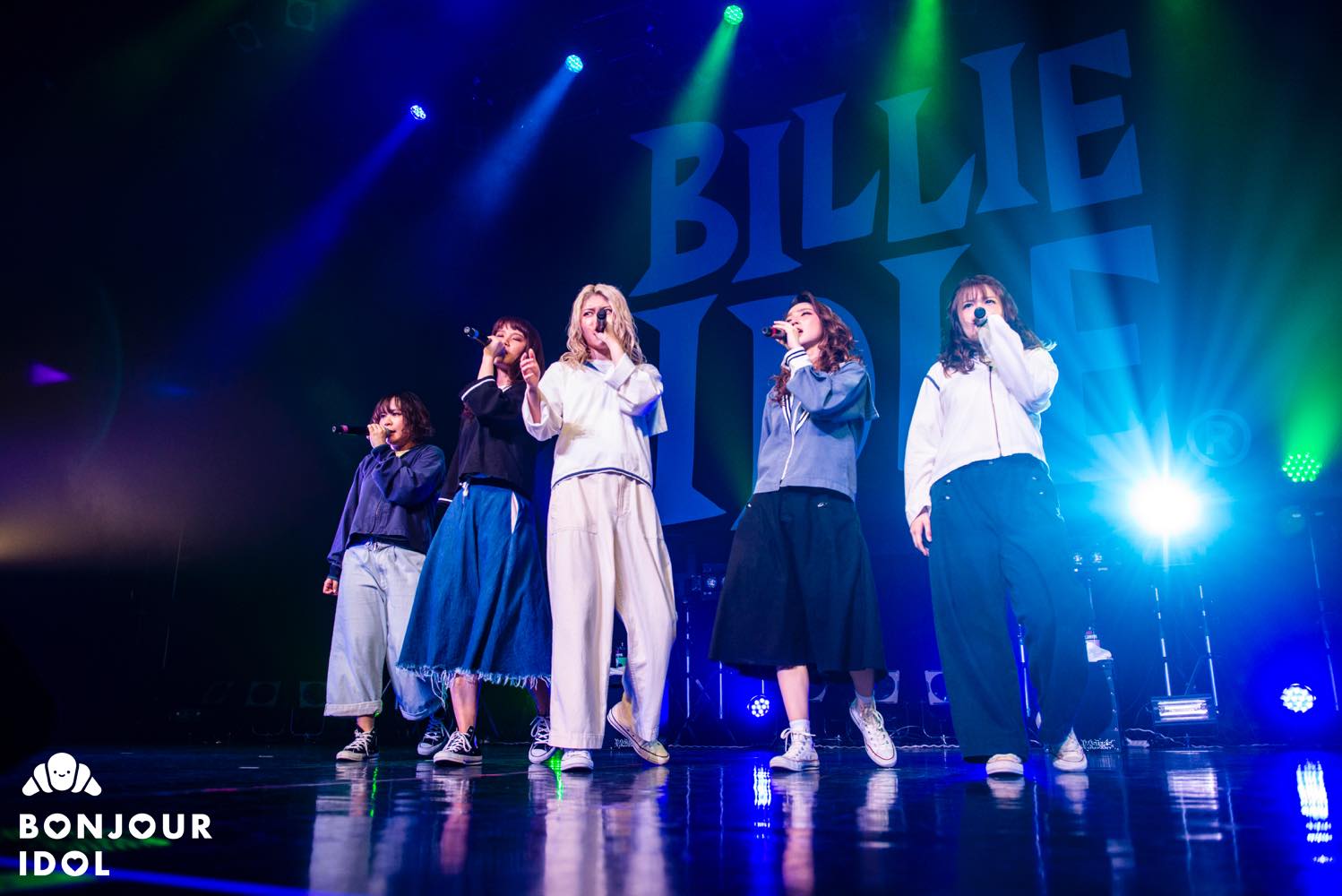 It is after this ballad, eponymous to their tour, that we officially dive deep into the BILLIE IDLE® world while First Summer Uika blows the first notes from her harmonica for the joyful “Everydays”. The group then follows on “Sound of Music” and the chants of “P.S.R.I.P.”, before launching the very appropriate “Heisei Rockstar”, at the dawn of the new Reiwa era in which Japan is about to enter on May 1st. The guitar riffs and powerful vocals from First Summer Uika and Momose Momo make the entire room shake, to then start strong>“MESSAGE” and their kick-ass choruses, under the audience’s cheering. This segment then ends with “DOKI2”. 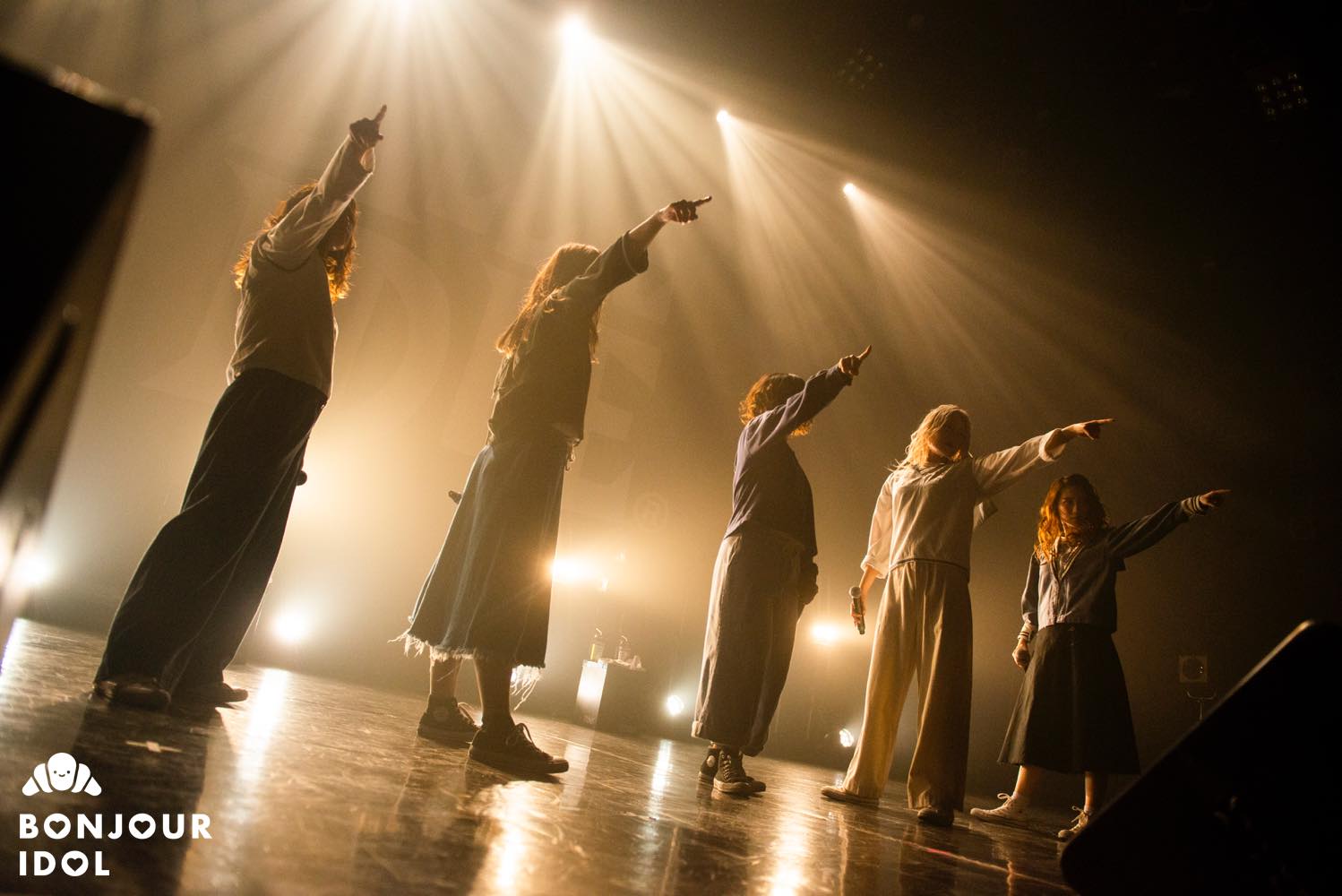 This will be the only single pause throughout the entire concert, the five members of BILLIE IDLE® performing the entire setlist almost non-stop. They introduce themselves one by one, in longest group tenure order, starting with First Summer Uika and Hirano Nozomi, then Momose Momo and her little sister Akira, ending on Pour Lui, Youtuber and founder/ex-leader of two eras of alternative idol group BiS, who had joined the group just around one year earlier. “Akasaka, we are back!” First Summer Uika yells to end this introduction MC, before announcing the next song.

We dive into some 1980’s pop music with “anarchy in the music scene” and its delirious choreography, between the badass expressions of Uika and the bright smiles of Akira happily jumping around on stage. The very catchy “be-bop-tu-tu” follows up in the same style, carried by the harmonies from Hirano Nozomi. “Cinderella Anthem” starts with its dance moves clearly inspired from the bubble era and its trend of waving colorful feather fans (jurisen, contraction of the famous early 90’s nightclub Juliana Tokyo, and sensou, folding fan) in the Tokyo nightclubs.

An electronic riff calls for the powerful “Tokyo Marilou”, to then let Hirano Nozomi open “HUMANOID” and its melancholic tones. The atmosphere is all set for ballad “Bye Bye Loneliness” and the emotional vocals from Pour Lui. Electric guitars then escort BILLIE IDLE® for the mellow yet seductive “Tanchou na Elegy”, before yelling an optimistic confession of love with “Memories”.

“Douse kieteshimau inochi nara” resonates in the venue, reminding everyone that BILLIE IDLE® is on the tight list of idol groups collaborating with Scrambles’ Matsukuma Kenta. But the mood breaks when the vintage punk guitars of “Nakisou Sunday” rip off from the speakers, then following up with “Kanata ni…”. The group ends the main part of this concert with their devilish cover of “FIRE AFTER FIRE” from Seikima-II in a crazy hard rock atmosphere. 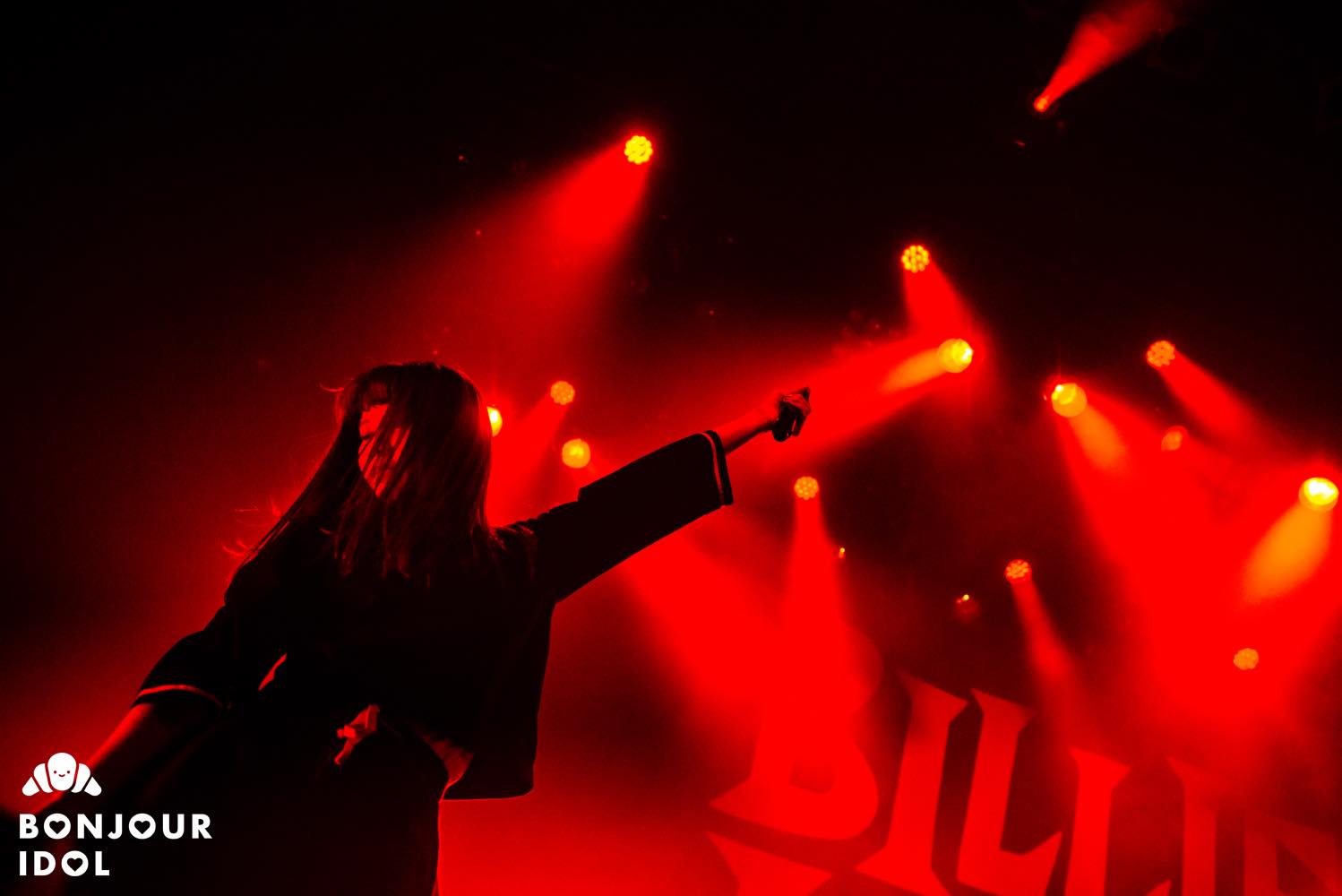 The fans don’t wait for very long before calling back their (not) idols on stage. While BILLIE IDLE® thank their audiences for contributing into the success of this tour, Pour Lui reminds everyone of an upcoming milestone. “This year will be my 10th anniversary since my debut as a singer and idol,” she starts, “For the Reiwa era, I want to go further! I want BILLIE IDLE® to go further!”. First Summer Uika then starts imitating 90’s model and talent Fujiwara Norika‘s breathy jerky speech to thank the fans, ending it with a “I love you all!” in Kansai dialect, welcomed by a round of applause as the fans start chanting Norika’s name as a response to the joke.

The group was not going to end this tour finale without any special announcement. Pour Lui takes this opportunity to reveal the title of their next single, scheduled for release on May 22nd. “Bokura mada chippoke na koro no hanashi” can be shortened into “BokuPoke”, adds First Summer Uika after seeing the surprised faces of the fans after hearing such an unusually long single title. It will also be the official title of their next summer tour, announced at the same time! BILLIE IDLE® will be performing 15 times over two months of national tour, starting with a first show on July 28 in this very same Akasaka MyNavi Blitz. 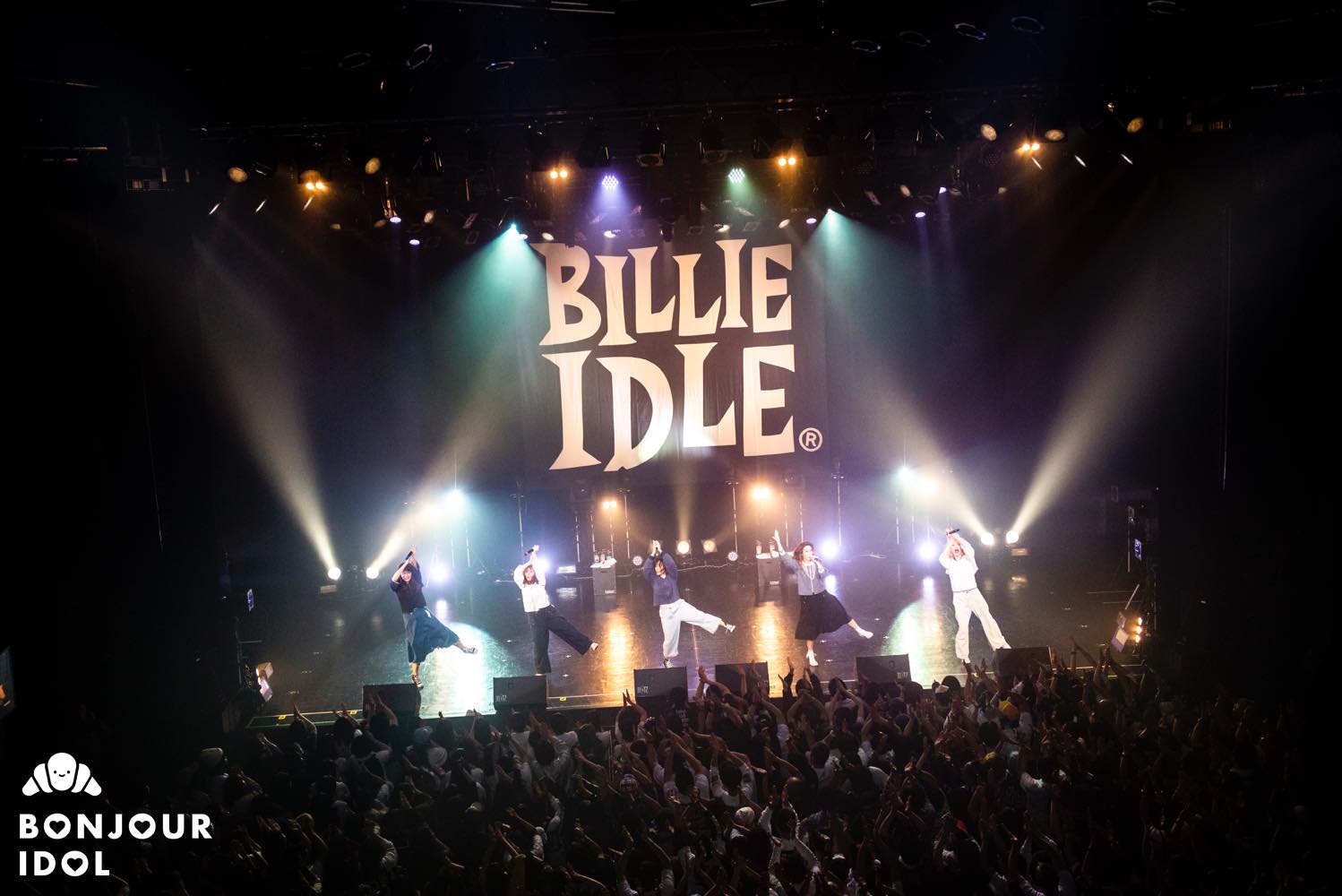 The show ends on the very first performance of “Bokura mada chippoke na koro no hanashi”, before starting the happy “MY WAY”, the audience clapping their hands on beat with the members on the choruses. BILLIE IDLE® then officially closes this tour with the playful “be my boy”, juggling between their feminine and more masculine sides with a smile.

It is a high-quality performance that BILLIE IDLE® offered yet again, successfully sharing their energy and joy with the audience. We will be thrilled to be part of the show once again in July for the launch of their summer tour, that sets to be very rock’n’roll! 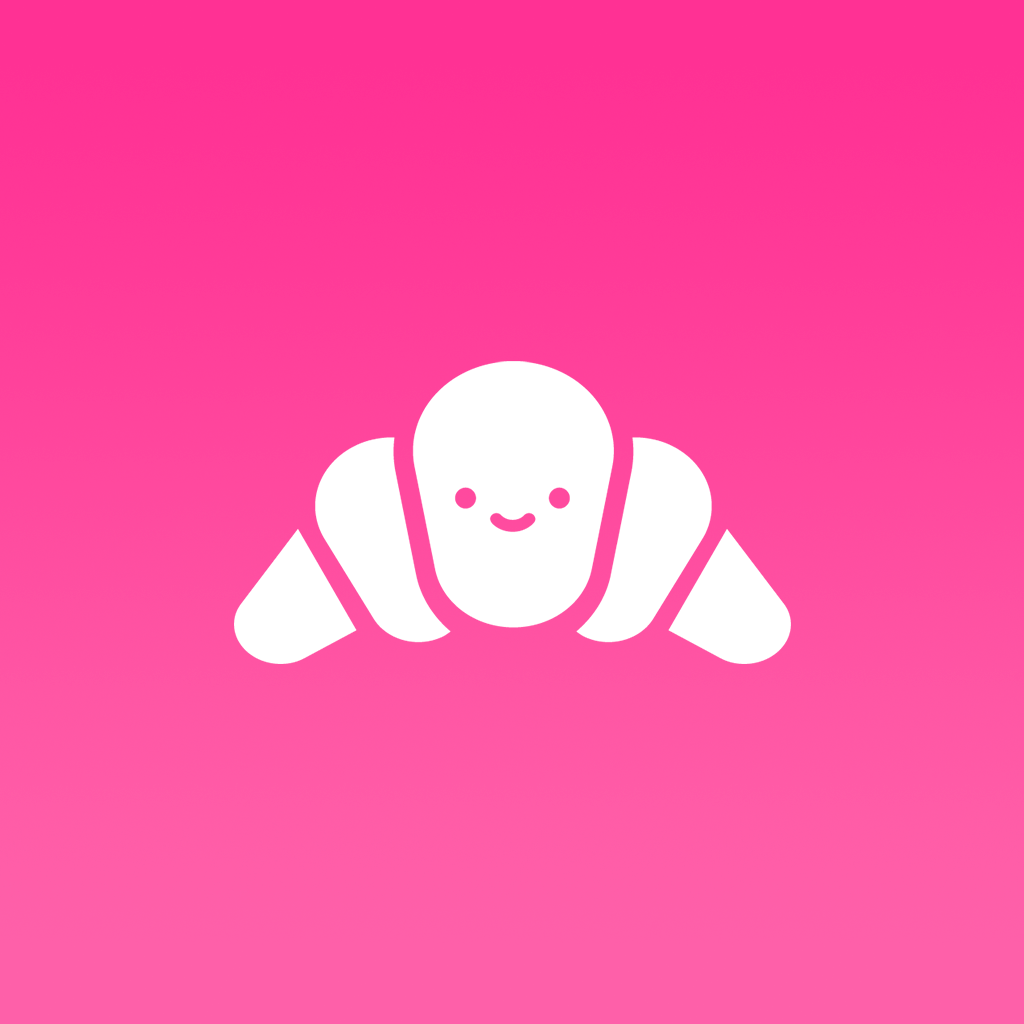